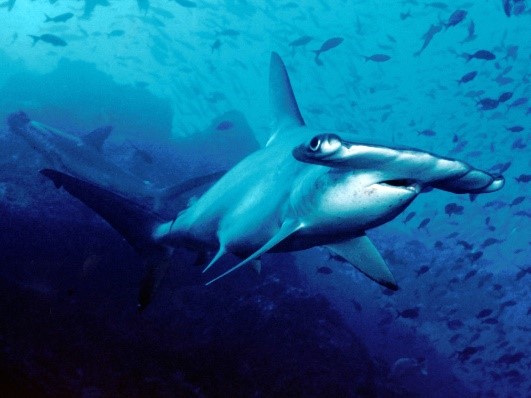 A Blast from the Past

Picture this, you are out collecting samples of sharks when you stumble across some individuals with some quirks; you were pretty sure what species they are, but now you’re not so sure. This is exactly what happened to fish biologist Dr. Carter R. Gilbert in 1967. Gilbert had caught several scalloped hammerheads (Sphyrna lewini), but when he started dissecting them, there were several individuals among them with noticeably less vertebrae in their backbone. Although this difference was noted, the scientific community attributed the difference to individual variation. Scientist would soon learn, however, that Dr. Gilbert was on to something.

Fast forward almost 40 years, scientists have new technology available to them, and the power to sequence and analyze DNA is now at their disposal. Dr. Joseph Quattro and colleagues captured 80 sharks along the coast of South Carolina from 2001 to 2003 that were identified as Scalloped Hammerheads. They sequenced the sharks’ DNA and took body measurements. In line with Dr. Gilbert’s findings, the team noted variation between the sharks’ physical characteristics. However, there was not enough evidence to indicate that these differences were more than variation between individuals. Once again, the only notable difference was in the number of vertebrae. However, the DNA told a completely different story.

DNA: The Key to Unlocking the Mystery

In this study, small pieces from the fins called fin clips were taken from the sharks. DNA was extracted from these pieces of tissue much like DNA can be extracted from a cheek swab in a kit to determine ancestry. When Quattro and his team analyzed the DNA, they found that the sharks were part of two genetically distinct groups, and that these were not just two distinct populations, but completely different species. So, in 2013 the team named the new species, Sphyrna gilberti, after the biologist who first noted these differences, Dr. Gilbert. As the new species was found off the coast of South Carolina, it has fittingly been called the Carolina Hammerhead. The Carolina Hammerhead is what biologists call a cryptic species, which is a species that looks almost identical to another species but is a genetically distinct species. Identifying whether a specimen is a Scalloped Hammerhead, or a Carolina Hammerhead requires genetic testing or lethal sampling, which makes estimating population sizes and distributions difficult.

An Answer that Unleashes More Questions

Now that scientists know this hidden species exists, it has raised even more questions. Dr. David Portnoy recently gave a presentation at Sharks International, a conference of shark scientists, advocates and policy makers, in which he addressed some of these questions. Dr. Portnoy hopes to determine if these species mate, and if their offspring are capable of reproducing. Mating across two different species is called hybridization. There are several known species that hybridize. A hybrid that many are familiar with is a mule, which is the product of a male donkey and a female horse. Mules are hybrids that are sterile, or incapable of reproducing, but not all hybrids are sterile. Some hybrids can and do reproduce in the wild. If these two species are capable of mating and are doing so regularly, this has some serious conservation implications. Dr. Portnoy shared some preliminary data at the Sharks International conference, but we will all have to keep an eye out for his publication to see if he can provide some answers to these new questions.

Why Do We Care?

You may be asking yourself, why any of this matters. Who cares how many species of hammerheads there are out there? Who cares if there are two species that look identical? Who cares if they mate with each other? Aside from it being a window into an interesting phenomenon in the formation of species, it also has serious conservation implications.

The Scalloped Hammerhead, along with several other members of the hammerhead family, is an endangered species according to the International Union for Conservation of Nature (IUCN). To be listed as an endangered species, a species must have an extremely low population size and be at risk of extinction. There aren’t many Scalloped Hammerheads left, which we already knew, but there could be even lower numbers than previously estimated. Who knows how many Carolina Hammerheads were inadvertently counted towards the Scalloped Hammerhead population? There is not currently enough data on the Carolina Hammerhead population, but population sizes for this species are likely low as well. This means that policy makers may in fact be dealing with two endangered species instead of just one. In addition, if they mate, this raises even more questions: do hybrids have a similar, better or worse survival rate than each individual species? If they are mating, the number of hybrids could increase as the populations of both species continue to decline. There is much scientists don’t know about how these two species interact with each other or how they will interact in the future. Scientists also don’t yet understand what these interactions could mean in terms of their survival. There is much to be learned, but one thing is for sure: conservation of these hammerhead species just got a lot more complicated.