“Calcification is not the Achilles’ heel of cold-water corals in an acidifying ocean” Rodolfo-Metapa, R. et al. Global Change Biology 21:6

By this point, ocean acidification has worked its way into the climate change conversation. As ocean pH continues to drop (ocean acidification) as a result of increases in atmospheric carbon dioxide, scientists have been scrambling to understand how species and ecosystems will respond. Of particular concern are corals, organisms that support a vast quantity of marine life. Corals are colonial marine invertebrates that build complex structures.

Most corals are calcifying organisms, meaning they are composed of hard, calcium-based material. Under pressure from ocean acidification, corals are likely to struggle to maintain their structure, as the amount of calcium carbonate (a molecule important for building hard parts) declines and saturation states of calcite and aragonite decrease. Coral skeletons are composed of one of these two molecules. Under ocean acidification, chemical changes to the water cause a decrease in the saturation state of both molecules, when the saturation state gets too low; corals switch from calcifying (or building up their structures) to dissolution (the breakdown of their structures). It’s easy to think about ocean acidification “melting” or “dissolving” corals, but in truth, coral health is tied to the saturation state of calcite and aragonite. Researchers have shown that ocean acidification has impaired the calcification, and ultimately the health, of many coral species (Fig. 1). But not all coral species are created equal. Corals are found throughout the world’s oceans; there are your tropical reef corals and cold-water (or deep sea corals). This geographic diversity means that certain corals species are likely adapted to different environments and are susceptible to different pressures. As a result, different coral species are likely to have different responses to ocean acidification.

Cold-water corals (Fig. 2) are of interest to scientists, as they inhabit parts of the ocean that are already experiencing low saturation states of aragonite and calcite. Not unlike the tropical, shallow-water corals, cold-water corals provide habitat, food, and refuge to a number or marine species. Recently, researchers working in the Mediterranean put cold-water corals to the acidification test and got some encouraging results.

Between 2008 and 2009, researchers collected 3 species of cold-water corals via trawls in the Adriatic Sea. Caryophyllia smithii (Fig. 3), Desmophyllum dianthus (Fig. 4), and Dendrophyllia cornigera (Fig. 5) were the three species collected and tested. Individuals were brought back to a laboratory in Monaco to be held and acclimated. In order to more completely understand the response of cold-water corals to acidification, researchers used both lab aquaria and field studies. After acclimation, the 3 species of coral were placed in large glass aquaria and treated for 3 months in one of two pH treatments, a normal of control pH and a high CO2/low pH treatment. By taking coral weights at the beginning and end of experimentation, researchers were able to calculate net calcification (or the amount of calcification with the amount of dissolution included). Gross calcification was determined for each species as well by looking at isotopic characteristics of calcium within the corals. Researchers also investigated coral respiration before and after lab experimentation in order to determine the fitness of each species.

From their lab experiments, researchers found all 3 cold-water corals to be resilient to ocean acidification. Net and gross calcification for all species was virtually the same for both acidification and control treatment (Fig. 6, Fig. 7). All species were able to consistently calcify, despite low saturation states. Although the calcification rates were low, they were still positive, meaning corals were growing and not dying off. When looking at respiration rates, again there was no difference between acidification and control treatments (Fig. 8). In the field study, it was found that net calcification rates were the same in D. dianthus at both high and low pH sites (Fig. 6).

Researchers believe these corals are resilient due to a few things. These corals are going through calcification processes in an intracellular space where pH is more up to their control. They also believe that coral diet plays a big part in determining health and ultimately calcification. Many corals also have symbiotic algae that access carbon from the water column for photosynthesis. These algae have the ability to covert carbon species to carbonate, a molecule in decline but necessary for calcification.

The findings from this work are very important. With alarmists waving their arms about corals dissolving away and the ocean landscape changing, knowing that there are indeed resilient species provides a breath of fresh air. This study helps emphasize that not every species (or ecosystem) is going to respond to climate change in the same way, thus it is important to take a close look at a wide range of species and responses. These 3 corals, which help support unique ecosystems, are virtually un-phased by ocean acidification. Sure, there are still coral species that won’t fare so well in the future, but if scientist can dig deeper and understand how these corals adapted that could lead to unlocking that potential in other coral species.

Do you think discoveries like this do enough to brighten the future, or is it too little too late? 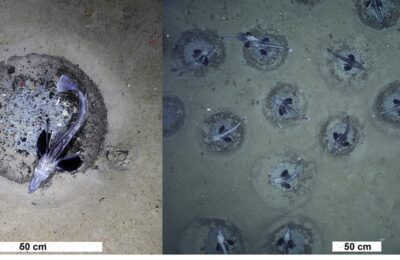