Turns out, intense spikes aren’t always sufficient armor. Just ask a sea urchin (Figure 1). Sea urchins can be found everywhere from shallow tropical waters to deep artic waters. Despite their seemingly impressive defenses, they can end up as food for a number of predators including fish, crabs, anemones, and marine mammals. In shallow, sun-lit waters, sea urchins are known to cover themselves with nearby materials like pieces of algae or shells to shield them from UV radiation or to aid in predator avoidance. However, “covering” is rarely observed in the deep sea. This study investigated the prevalence and value of sea urchin covering behavior in deep waters off the western peninsula of Antarctica.

The researchers conducted 11 photographic transects of the Antarctic sea floor by pulling a SeaSled towable camera vehicle. The sled had two cameras that took pictures every six seconds, covering a 2m wide area with each pair of photos. The transects were conducted at depths ranging from 390-2100m (1280-6890 ft), covering a total distance of nearly 95km (59 miles). In all 15,597 images were analyzed for all megafauna (large animals like crabs, anemones, urchins, brittle stars, fish, octopods, etc.). The number of urchins that were covering was determined as well as the type of material used to cover the urchins.

Three types of urchins were observed, but only one (Sterechinus spp.) displayed covering behavior. Whole tests (dead sea urchin shells) were not very abundant (Figure 2a) but they were used fairly often (Figure 2b) by urchins as a covering. Likewise, algae/bryozoans were used more than their relative availability, while pieces of shell were used as a last resort for covering.

In such deep waters, where there is little sunlight, covering behavior is not likely used to avoid UV radiation. So that leaves predator avoidance as the most feasible reason for urchin covering behavior. Which potential predators are the sea urchins trying to avoid? There was no correlation between the frequency of urchins covering and the abundance of any potential predators, except one – the king crab. In fact, there was a very strong correlation (r2=0.975, p=0.033) between king crab abundance and the frequency of urchin covering.

But can a small piece of algae or shell on top of an urchin (Figure 3) really protect you from a predator? Lab studies have shown that only 5% of urchins able to cover themselves were consumed by anemone predators compared to 70-80% of uncovered urchins. The mechanism for how covering protects urchins from king crabs is unknown, but the current hypothesis has to do with handling time. Handling time is why you keep picking at the bag of pretzels at lunch time instead of going into the kitchen and making what would be a much healthier lunch. The increased handling time required to make the healthier lunch deters you, so you opt for the easier option with shorter handling time. Handling time is a major component to king crab feeding and urchins that are covered may require greater handling time, encouraging the crab to seek out a different, easier meal.

Deep-sea urchins in the Antarctic seem to be utilizing the covering behavior similar to their shallow, warmer water relatives to help them avoid predators. This behavior had rarely been seen before and is still not yet fully understood. However, one reason that the behavior may be more prevalent now than in the past may be due to king crabs becoming much more common in sea urchin waters due to temperature shifts. Furthermore, lab studies have shown that a shallow water species of urchin loses its ability to cover when water temperatures increased by small amounts. These two factors could spell trouble for the benthic-habitat-mediating sea urchins of Antarctica in the age of climate change. 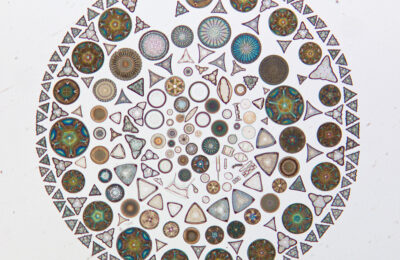