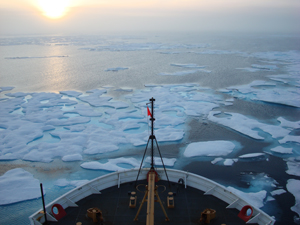 People often think that the biggest difference between the Arctic and Antarctic is that one has polar bears and one has penguins. Yet, while both are cold and remote, the two polar regions have a number of other differences. Chief among them changes in sea ice extent and variability over the past several decades.

Scientists and the media have documented the rapid decline of Arctic sea ice cover over the past several decades. But things are a bit different in the Antarctic. Southern Hemisphere annual sea ice extent anomalies (deviations from the average) from 1979 to 2012 show a positive trend (see figure below). In other words, despite increases in global ocean temperatures, long-term trends actually show an increase in Antarctic sea ice extent. There are a number of reasons for this apparent paradox: differences in geography, ocean properties, and atmospheric circulation to name a few. However, the relative importance of these different factors and their interaction is not well understood.

A recent study in the Journal of Climate led by Leijiang Yu from the Polar Research Institute of China (in collaboration with researchers from Michigan State University, and the National Center for Atmospheric Research) uses satellite data to assess the role that atmospheric variability has played in driving Antarctic summer sea ice trends over the past several decades. This type of research will help us untangle the complex combination of processes controlling sea ice extent – a critical step toward improving ocean models and future climate projections.

In the study, researchers used a statistical tool called self-organizing maps (SOM) to analyze satellite data of sea ice extent from 1979 to 2017. The SOM technique is a way of identifying patterns in complex data by reducing it into a two-dimensional array made up of nodes. Each node corresponds to a different spatial pattern of the input data.

Conducting this SOM analysis, Yu et al. generated nine nodes to explain the variability in Antarctic sea ice cover. Each of these nodes represents a different distribution of sea ice that was commonly seen in the satellite observations. Two of the nodes, in particular, explained 40% of the total trend in the sea ice cover. Upon further investigation and comparison with atmospheric reanalysis products, the researchers found that the sea ice distribution associated with the two dominant nodes could be linked to large-scale climate variability.

Yu argues that one of the dominant nodes is associated with the positive phase of the Southern Annular Mode (SAM). SAM describes the north–south movement of the westerly wind belt encircling Antarctica. In a positive SAM event, westerly winds move poleward and are weaker than average. The other dominant node, conversely, was linked to stronger winds, specifically a wave train originating over northern Australia. These results suggest that patterns of Antarctic sea ice may be strongly connected to atmospheric processes.

Sea ice plays an important role in the climate system by modulating interactions between the ocean and atmosphere. For example, sea ice shields the surface ocean from winds and reflects a lot of sunlight due to its white color. Through mechanisms such as this, sea ice affects the ocean’s uptake of heat and nutrients. Therefore, investigating the processes that contribute to sea ice variability is crucial to modeling global climate. Studies like Yu et al. are important because they contribute to our understanding of long-term sea ice trends in the Antarctic. Further work in this vein however, is necessary to improve long-term climate projections and prepare for the effects of climate change. 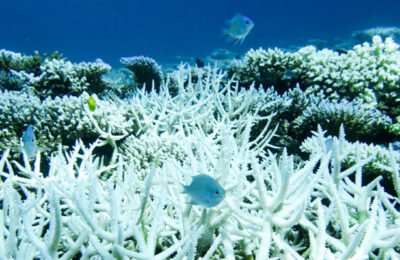