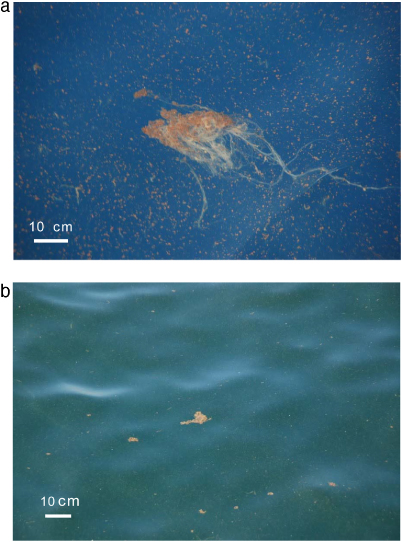 If you are an avid reader of Oceanbites you have probably realized this is a theme week! This week we are discussing interesting articles about marine snow. As a refresher, marine snow are particles greater than 0.5 mm that are made of smaller things like bacteria, feces, phytoplankton, and lots of oceanic bits and bobs. There are two types of marine snow: zooplankton activities (ex. feces and dropping food) and physical coagulation. This article focuses on physical coagulation. Physical coagulation is the sticking together of material. For marine snow, the material is primarily organic. In order for a coagulation to become dense enough to sink, it requires a large concentration and abundant “stickiness” to remain intact. Lots of phytoplankton release exopolymeric substances, which is a fancy way to think about mucus.  The mucus helps the physical aggregate stay together.

The goal of this study was to understand how the marine snow formed after the Deepwater Horizon oil spill in May 2010. During the clean-up effort, people noticed there was cm-sized mucous-y marine snow floating on the surface in the oil layer near the spill. These large coagulations are uncommon in this region and by June the marine snow had vanished, likely due to sinking. Researchers in this study investigated some potential formation pathways that could lead to these large marine snow events.

Researchers collected some of this mucus-rich marine snow and stored in the laboratory to see how long it takes to sink and the natural lifetime of these marine snow sheets. They also collected water (Figure 1) far from the oil spill from the surface and subsurface as well as water that was in the oil plume. Water was collected during three cruises from May, June, and August 2010. Scientists made sure the water was free of marine snow based on visual inspection because they wanted to produce their own.  Marine snow replication was accomplished by adding oily water collected after the spill, called GoM-oil, to some samples and “clean” light crude oil, called LA-oil, to others. The GoM-oil was exposed to chemical weathering, microbial activity, and other additions to aid in the oil removal during clean-up. Whereas the LA-oil was a similar type to that which was initially released during the Deepwater Horizon spill but had undergone no weathering. The samples were stored in the dark on a roller table which mimics surface water conditions (i.e. wave movement).

As mentioned above, the marine snow observed right after the oil spill was different from what is normally found in the Gulf of Mexico. It covered a wide size range and most was “stringy” (Figure 2A) with mucus threads which gave it a web-like structure allowing it to float. While there was no recorded in situ sinking velocity, there are observations of it staying at the surface for about a month. The marine snow taken to the laboratory was positively buoyant (moved up in the water when shaken) for up to two years! It is extremely unlikely that in situ marine snow could ever float this long considering the lack of pristine conditions in nature (like wind and waves). Researchers found that of the particles that sunk first, most were small (less than 5 mm) and very fluffy (Figure 2B). The sinking velocity of the fluffy marine snow was found to be from 68 to 553 meters per day. This is in a range expected for other types of marine snow types. Unfortunately, it was too hard to quantitatively determine a sinking velocity for the stringy marine snow. Finally, scientists noted that the mucus, which was important to help keep the positive buoyancy, diminished with time so that after about a month the marine snow was similar to other types of marine snow.

How could this marine snow have formed?

Using the laboratory experiments of adding the oily seawater and the crude oil to the clean and oil impacted water samples researchers came up with three potential mechanisms to explain this marine snow formation.

The first mechanism was observed using the GoM-oil which must have had a microbial community that could degrade oil by using parts of the marine snow and created the mucus that emulsified the oil (Emulsified oil are the bubbles you see when you shake a water and oil mixture). Mucus strands formed in this oil layer made a web of strands in the surface water. As the web aged it collapsed on itself like an old spider web, which produced the large marine snow particle. This type of particle would be very sticky and attract surrounding smaller particles helping it grow and eventually sink.

The second mechanism forms in tandem to the first. However, this mechanism leads to more of the fluffy marine snow. Marine snow was observed to form by the direct collision of particles that eventually formed an aggregate. These collecting particles were trapped in the emulsified layer and could end up in the strands above. Researchers suspect this mechanism is the result of interactions of particular components in oil (specifically polar chemicals), bacteria, and natural suspended material in the water. Other researchers have shown that the polar components in oil can form emulsified layers. These layers would be resistant to biodegradation and chemical weathering allowing them to exist long enough to stick together.

The final mechanism discussed occurred when the cyanobacteria Trichodesmium was present. Trichodesmium forms aggregates naturally and is found in the Gulf of Mexico; however, when oil is present the lifetime of the aggregate changes. Oil droplets get trapped within the aggregate and lead to a faster degradation time.

What did we learn?

This study could not quantitatively address all the elements of the marine snow event observed during the Deepwater Horizon spill but we did learn about how oil impacts marine snow. Researchers found that LA-oil did not cause or increase marine snow formation. However, when the LA-oil was incorporated into the aggregate it did speed up degradation. Overall, GoM-oil had a greater impact on marine snow formation. This indicates that chemical weathering and microbial community structure play an important role in marine snow formation.  The laboratory experiments found three different mechanisms that represents the different types of marine snow observed in situ. Understanding this marine snow helps the bigger picture of understanding where the oil went in the Gulf of Mexico after the spill. While not discussed here, as the marine snow sinks it could be consumed by zooplankton or, if it hits the sediment, benthic communities. This is another pathway that oil could move up the food chain.