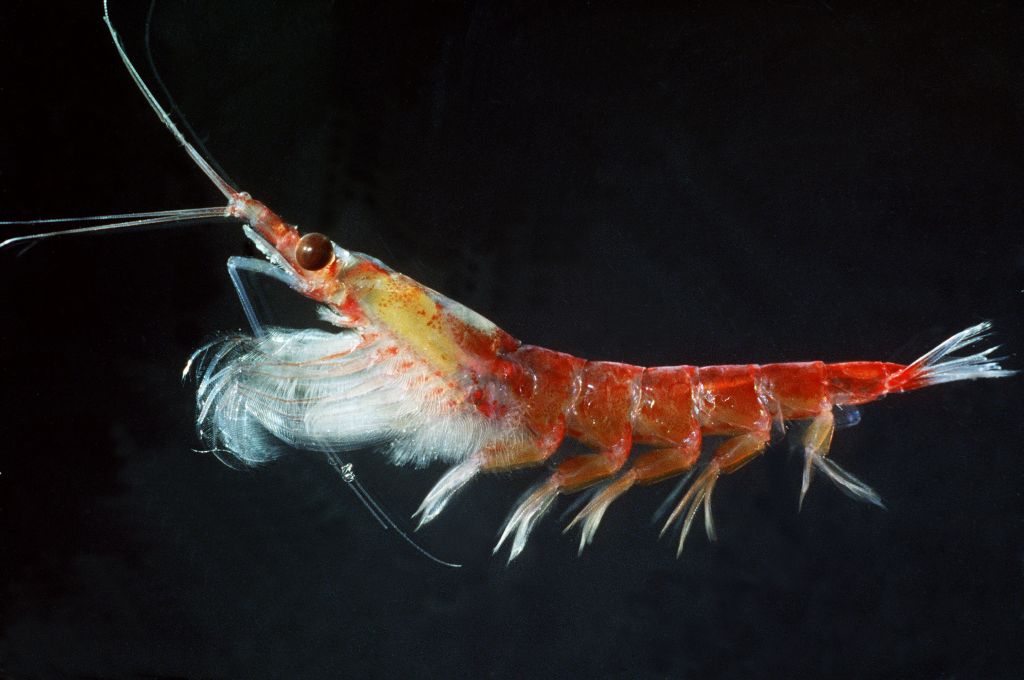 The world’s most abundant animal

Antarctic krill, tiny little shrimp-like animals that grow up to 2.4 inches long, are a keystone species in Antarctic food webs, acting as the main food source for many marine mammals including seals, whales and penguins. Antarctic krill live throughout the Southern Ocean in the open ocean, near coastlines and under ice, and are, in terms of biomass, probably the most abundant animal species on the planet (approximately 500 million metric tons, corresponding to 300 to 400 trillion individuals). Krill spawn their eggs in late spring and the tiny larvae grow during summer and autumn before spending winter under the shelter of sea ice, emerging as juveniles the next spring. The krill larvae need algae to feed on throughout their first year so they can grow into healthy juveniles, but during the winter when there is little sunlight, food is hard to come by.

As a result, scientists have hypothesized that the krill larvae must be relying on algae growing in winter sea ice to get through the harsh winter where there is very little to eat in the water below the ice. But in some recent observations there does not seem to be a clear relationship between winter ice conditions and the success of krill larvae, so maybe the relationship between ice and krill larvae success is not as straightforward as we thought. As sea ice in the Antarctic is changing rapidly in response to climate change, figuring out how the ice affects krill will help scientists figure out how Antarctic ecosystems will be affected by sea ice change.

Diving below the ice

To delve deeper into how ice influences krill larvae, a group of scientists took a ship, the RV Polarstern, to the Weddell Sea in Antarctica for two months in late winter and early spring 2013. to survey krill larvae across three different zones: the open ocean, the marginal ice zone and pack ice zone. In each of these regions, the scientists collected samples of krill, analyzed water properties and  As well as collecting samples,  the researchers completed 68 scuba dives under the sea ice, at four different locations. They collected video footage to count the number and behavior of krill larvae in different regions.

When the growing gets rough

Larvae were most abundant where the ice was thick and the underside of the ice was rough and varied, with ledges and nooks and crannies. They found particularly large concentrations of krill larvae living on sea ice ‘terraces’, which are like a ledge of ice sticking out with a roof of ice above. These terraces make good winter homes for krill larvae because the terraces collect organic material released from the ice above, making an easily available feeding ground for the larvae.

The researchers also found that krill larvae feeding and growth were associated with food availability in the water column, but not related to the amount of food within the sea ice. In fact they looked at the stomach contents of larvae feeding on the sea ice surface and found a lot less food than larvae in the open water, suggesting that the algae in the sea ice were not easily accessible. So instead of feeding on algae directly on the ice as previously thought, they feed on food particles released in the underlying water below.

Supplementary Video 1 from Meyer et al. 2017 showing patchiness and behavior of larvae under sea ice during the day in the pack-ice zone.

Now that they had shown that krill larvae do better under rough ice, the researchers looked at how the distribution and extent of rough ice might change in response to climate. Using a model to project into the future, they found that regions under rough ice that are favorable for krill larvae to spend the winter will be more prevalent under conditions predicted for the end of this century. However, at the same time, the overall sea ice extent is expected to decrease, leading to ice-free conditions in the late winter and early spring.

Beyond the ice edge

The new results of this study show that the relationship between ice and krill growth is complex, and a lot more work is needed to fully understand how krill change in response to changes in ice. Given that these organisms support a vast and important ecosystem, understanding and protecting their habitat is necessary in any efforts to conserve Antarctica’s unique wildlife.