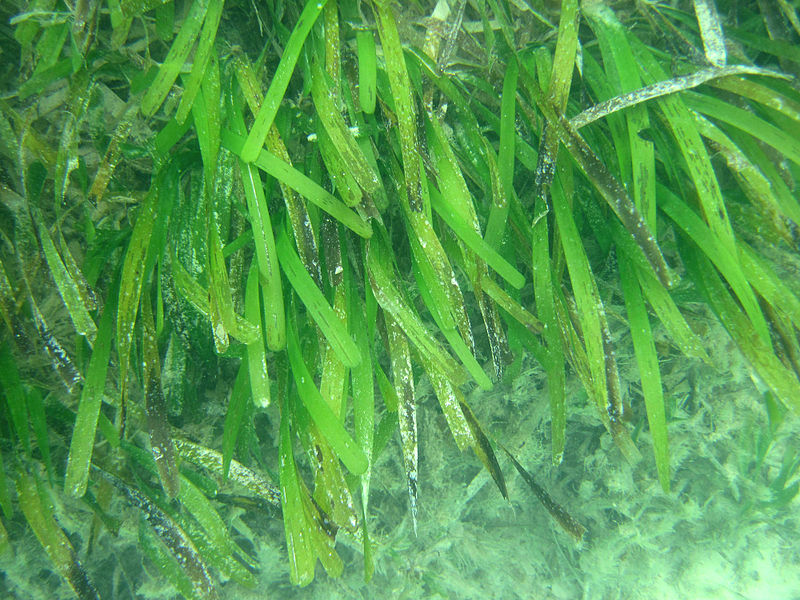 Seagrass meadows provide food and habitat for a variety of fish species. Juvenile fish are particularly dependent on the meadows, for the shelter they provide from predators. In the Caribbean, several native seagrasses might be found in the same shallow estuary or coastline, forming a patchwork of meadows that support a variety of different fish communities. This makes them invaluable to the larger reef community and fisheries that depend on them.

Seagrass habitats around the world are at risk of alteration by human hands; pollution, increasing erosion and sedimentation, temperature changes, and acidification can all alter or fragment seagrass meadows so that they no longer support healthy fish populations. Juvenile fish have particularly complex relationships with the meadows, and might only use a certain patch temporarily or under specific circumstances – some might use the meadows only until sexual maturation, some may migrate between several patches, some might trade a reef habitat for seagrass meadow during times of high predator abundance. It’s easily to imagine then, how a change to any individual seagrass meadow might have a dramatic effect on the fish that use it.

The invasive seagrass, Halophila stipulacea, arrived from the Red Sea and Western Indian Ocean to the Caribbean in the early 2000s. In the years since, it’s displaced native seagrasses and established formidable populations around 20 Caribbean islands, a rapid expansion for most invasive species. Stipulacea is particularly successful because of a few key traits: like many other invasive plants, it’s an early colonizer and can rapidly take over beds freshly disturbed by human alteration, it does well in nutrient high conditions common near human settlement, it’s resistant to future disturbance, and can reproduce by fragmentation so that, if some plants do break away in a storm, they can establish themselves somewhere down current.

While H. stipulacea is known to displace native seagrasses, it’s not well understood how fish populations fare in these new habitats. Olinger et. al. set out to investigate juvenile fish diversity, community structure, and abundance in H. stipulacea and native seagrass meadows in their recently published article in PLoS ONE. They also looked at area dominated by open sand, to compare the seagrass to a bare habitat, and focused their study on a more recently invaded area of the Caribbean, the US Virgin Islands. To compare their study sites, Olinger et. al. set out fish traps for three days and sampled them at both daily and nightly intervals so they could see if there were differences between habitat use at different times as well as species composition.

Overall, H. stipulacea supported fewer species of fish than the native meadows and was only more diverse than the bare sand. The researchers also found that nocturnal carnivore abundance was significantly greater in the invasive H. stipulacea meadows than in the native seagrasses. This could be explained by the greater abundance of invertebrate prey species found in H. stipulacea, promoting use by the juvenile carnivores. Diurnal carnivores (awake during the day) and herbivores were less common in the H. stipulacea patches, however. Here, the height of the different seagrasses might be important. H. stipulacea stands only about 4cm high from root stock to blade tip, compared with the taller 20cm S. filiforme and 18cm T. testudinum natives. For herbivores, the taller native seagrasses provide more shelter. If they’re eating them or the algae that grow on the seagrass blades, it may also be that the native grasses are more nutritious than H. stipulacea. The case of the diurnal carnivores is interesting though. The Spotted Goat Fish, for example, is a carnivore that prefers sparsely vegetated habitats because of a feeding behaviour that has them ingest sediment from the seafloor. Growing short but densely packed, H. stipulacea may prevent the Goat Fish from getting a good mouthful and encourage competition among individuals for the best spots, reducing their numbers in the H. stipulacea meadows.

Olinger et. al. show that community dynamics in seagrass habitats are complicated and that many factors may contribute to short or long term changes in fish diversity and abundance. H. stipulacea appears to present less than ideal habitat for a majority of fish species and may present barriers to movement between native seagrass patches where it becomes widely established. The researchers point out, however, that their study is really only a first glance at a much larger picture. More sample sites, a wider array of locations and associated environmental conditions, and longer sampling periods would yield more information to effectively answer their questions. For now, they suggest that marine managers prioritize seagrass habitats known to be key juvenile fish nurseries. The alteration of even a single patch could disproportionately affect the surrounding habitats and existing community interactions young fish depend on. Further study, restriction on transport vectors for H. stipulacea, and careful spatial planning may help mitigate fragmentation and degradation of native seagrass meadows.