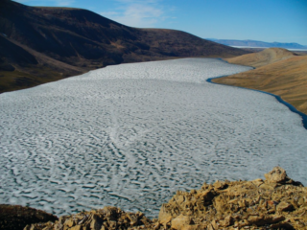 Climate change is currently affecting our planet in ways that scientists are just beginning to understand. Ocean temperatures around the globe have increased in the past few decades but how much this increase is due to humans versus natural fluctuations is still not clear. Understanding the natural rhythm of climate system is therefore important if we are to better understand how our actions are affecting it.

One of the natural rhythms oceanographers are keenly interested in is the Atlantic Multidecadal Oscillation (AMO). The AMO was discovered when scientists saw that average Atlantic Ocean temperatures fluctuate on timescales of 10 to 30 years. The AMO index is a measure of how much warmer or colder the Atlantic Ocean is compared to what is normally recorded for this region.

Some scientists though, have argued that the AMO is not real climate cycle because the fluctuation signals are so noisy and the record itself is short. Unfortunately, because ocean temperature was not readily measured until the late 1800s, our “instrumental” record of Atlantic Ocean is extremely short. This was the motivation for Dr. Lapointe and others to extend the AMO record much further back in time using geological techniques. They published a 3,000-year high resolution record of the AMO based on titanium (Ti) concentration of lake sediments from Ellesmere Island, Canada.

Ellesmere Island is located in the far northern Canadian territory of Nunavut where only the hardy Arctic willow shrub can survive. It’s here that Dr. Lapoint and colleagues sampled the sediments at the bottom of an 80 meter deep lake to generate their long AMO record.

You might be wondering how dirt and clay from the bottom of a lake in Canada can tell us anything about average Atlantic Ocean temperatures, but this is where the expertise of oceanographers and climate scientists comes in. Based on a series of complex ocean and atmosphere relationships that involve low pressure systems and snowfall rates, we infer that a colder Atlantic Ocean leads to more sediments rich in titanium being delivered to lakes in northern Canada. The reverse is also true, that a warmer than usual Atlantic Ocean means less titanium is delivered to these lakes. A more comprehensive diagram of this connection is shown below.

The authors compared instrumental measurements of Atlantic Ocean temperatures with the titanium levels found in the sediments to make sure these measures were in agreement. The good correlation between gave them confidence to extend their titanium record further back in time.

So does the AMO record we see in the last 100 years persist into the past? According to the authors results, it does! Based on the titanium sediment record, the Atlantic Ocean has oscillated in average temperature on 10 to 30-year cycles for the last 3,000 years. This is an important finding which affirms the presence of the AMO as a climate cycle.

What’s more interesting is that while the AMO is generally steady throughout the last 3,000 years, there are periods where it does change significantly. For example, during the 1500s to 1700s, the AMO index was extremely negative. This corresponded to a time in human history dubbed the “Little Ice Age,” when temperatures in Europe were cooler than usual for several centuries. This result shows us that the Little Ice Age also affected the Atlantic Ocean.

Another important result of the AMO record is that we see a shift to positive AMO values in the past 20 years that are some of the highest in the entire 3,000-year record. This study therefore allows us not only to understand the relationship between the ocean and climate in the past, but also puts in perspective how profoundly our planet is changing today. People usually think very little of dirt at the bottom of a lake, but climate scientists here have shown that these clays can help us unlock the mysteries of our planet’s past.