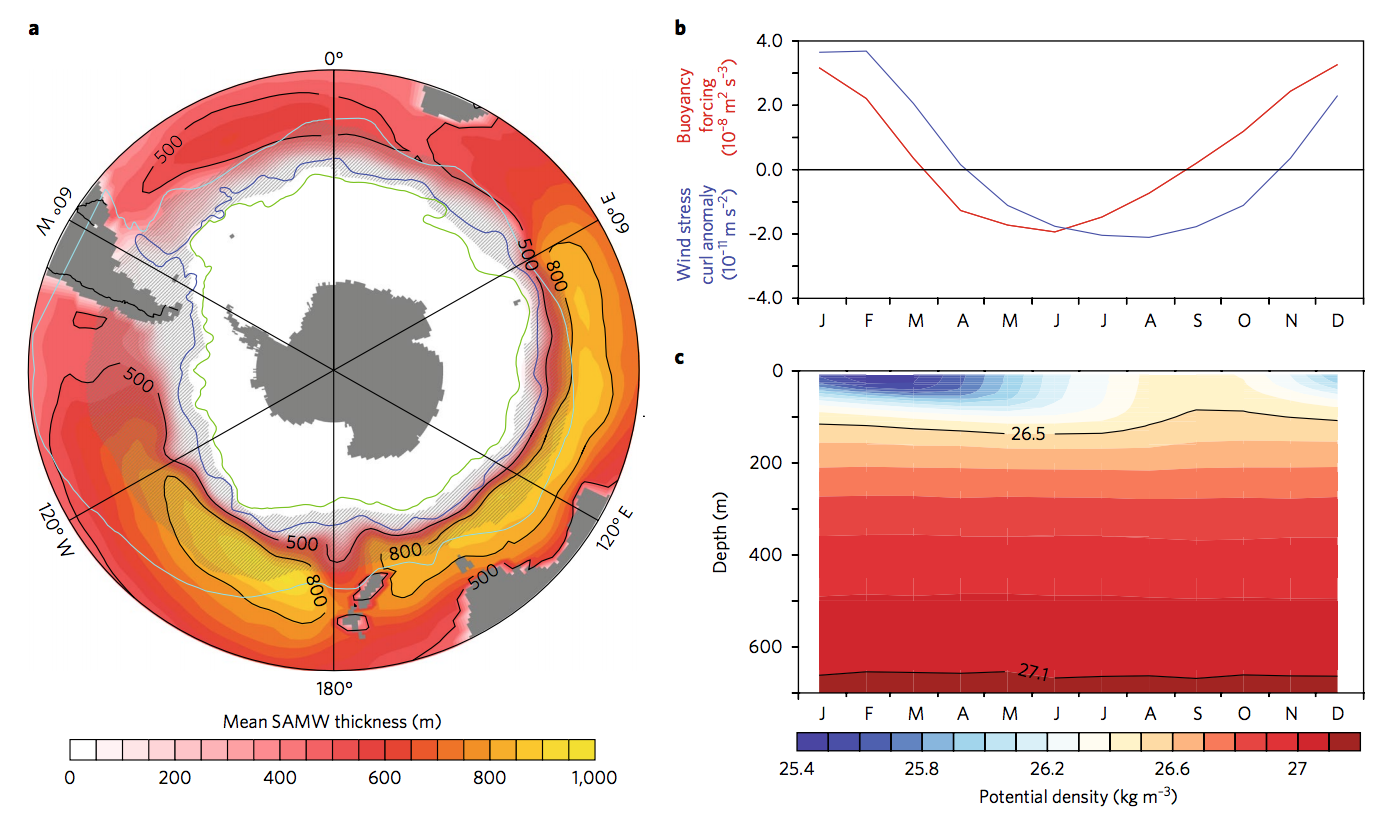 There is a common saying among ocean and climate scientists: global warming is ocean warming. This is not an exaggeration. Because of the large volume and high heat capacity of water, the world’s ocean absorbs 90% of the excess heat trapped in the Earth system by greenhouse gases. This ocean heat uptake regulates the amount our climate warms, but it is not always constant, as changes in ocean currents and circulation change how much heat is absorbed year to year, acting as a buffer of sorts for the amount of global warming we experience in the atmosphere.

These changes in ocean circulation and heat uptake are caused by two main things: changes in the exchanges of heat and freshwater (known as buoyancy flux) between the ocean and atmosphere, and changes in the winds forcing movement in the ocean surface. These vary year to year due to natural cycles like El Niño, and also as a result of longer term changes in winds and buoyancy flux. These cycles can cause some confusion because while on average we expect the atmosphere to warm gradually due to the heat trapped by greenhouse gases, sometimes there are years or even decades where these cycles cause the Earth to temporarily cool. From 1998-2012, the global average temperature didn’t increase and was labeled the ‘global warming hiatus,’ generating a lot of misinformation and causing some people to use it as an argument to deny the existence of global warming. Scientists knew better: the heat must have gone somewhere else in the Earth system, most likely the ocean. Scientists have taken on this challenge to figure out where the missing heat went during the global warming hiatus and why.

One region that scientists suspect could have played a role in capturing the extra heat is a region of the Southern Ocean, north of the Antarctic Circumpolar Current that encircles the Antarctic Continent. This area is special because in the winter strong winds and cooling of the sea surface cause it to become unstable and mix with water below, creating a very deep, thick, uniform layer from the surface down to 700 m. This layer is known as Subantarctic Mode Water, and can absorb heat from the atmosphere. When winter is over and the surface starts to warm, the Subantarctic Mode Water becomes trapped below the surface, storing the heat in the ocean. Because this thick layer has a special ability to absorb and store heat, a team of scientists from China and Australia set out to look at how the Subantarctic Mode Water and the heat it stored had been changing and why.

Using subsurface measurements of temperature and salinity from autonomous ocean floats that cover the world oceans, the team were able to look at how the depth, thickness, and amount of heat in the layer varied from 2005 to 2015. The scientists found that the Subantarctic Mode Water layer had overall thickened and increased in depth from 2005 to 2015, leading to larger storage of heat in the thicker layer. This suggests that the extra heat storage in this part of the ocean could account for a large amount of the missing heat during the global warming hiatus. To figure out what had caused the increase in heat stored, the authors looked at changes in winds and buoyancy flux and found that wind changes most likely explained the thickening of the layer.  When the winds strengthened, this made water converge at the sea surface, forcing the surface water to push downward on the deeper waters below. This downward motion caused the uniform Subantarctic mode water layer to thicken.

This is an important result, not just for explaining what happened in the past, but for understanding how the ocean heat storage might change in the future as the planet continues to warm. The researchers showed that changes in the wind were the main driver of the thicker layer and increased heat storage. Scientists also know that winds in the southern hemisphere are predicted to continue to change in the future in response to global warming, which means if this pattern in winds does continue, this region of the Southern Ocean may continue to store more and more heat in the future.