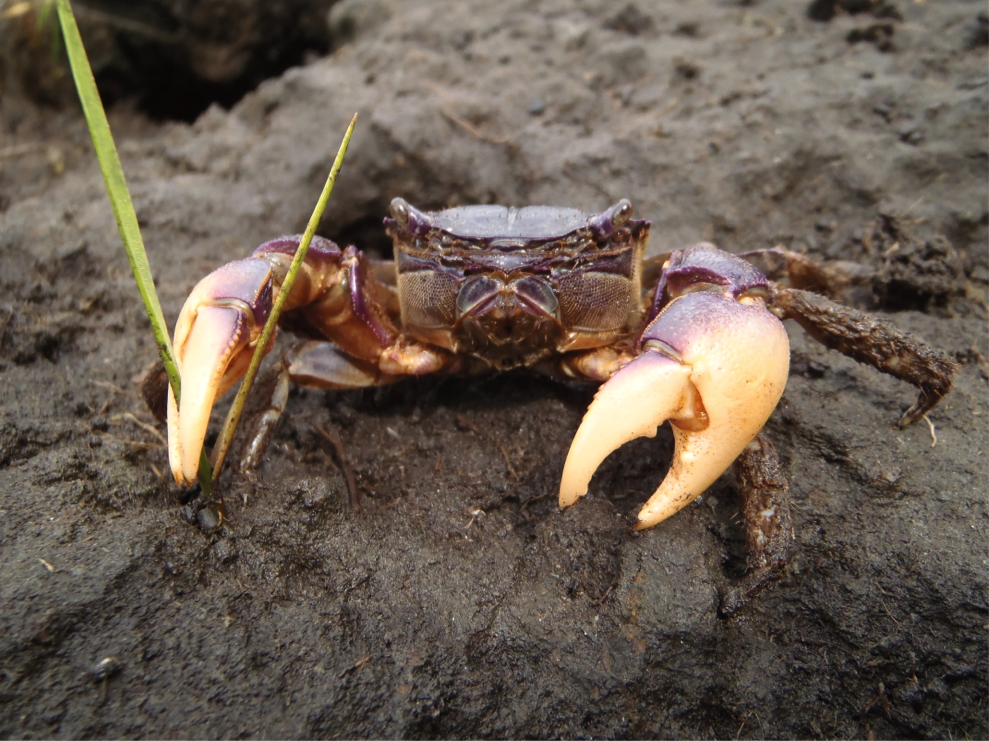 Munching, nibbling and burrowing their way through life, the humble marsh crab can now add “keystone species” to its ecological resume. As sea level rise has inundated shorelines on the East Coast of the United States, marsh crabs have emerged as important players in shaping how marshes respond to climate change. A new study suggests that these little crabs, once relegated to the bench to watch other heavy-hitting species play the most impactful ecological roles, are now changing the way creeks flow through marshes, what other animals live there, and maybe even the way marshes will function in the future.

Sea level rise is one of the more immediate impacts of climate change, and nowhere is this more evident than in salt marshes. In general, as the sea level rises, marshes spend more time underwater. This may seem like no big deal since marshes are tidal anyway, spending hours underwater every day. However, this can be harmful for the plants that  grow in marshes, specifically cordgrass Spartina alterniflora – food for marsh crabs.

To determine how much sea level rise was impacting salt marshes in the southeastern United States, the researchers examined hourly historic sea level data in salt marshes between South Carolina and northern Florida. They found that sea level rose at a rate 2.2-2.6 times greater from 1999-2019 than it had from 1940-1998. Even worse, they estimated that salt marshes spent between 2 and 55 times more time underwater from 1999-2019 than from 1940-1998. Altogether, the marshes were submerged from 219 to 402 more hours (that’s nine to about 17 more days) in 2019 than in 1999. The marshes are essentially drowning.

The marsh crab, Sesarma reticulatum, has historically been a relatively small part of a salt marsh community, but researchers noted that over the years, creekheads with dense marsh crab populations have become more common in marshes. Suspecting that sea level rise might be driving this change, the researchers used aerial images to look at nine sites along the coastline between South Carolina and Florida. They found that creekheads with visual signs of grazing from marsh crabs increased in all sites. Where there were marsh crabs, creeks grew longer each year and drained more water out of the marsh.

No place to hide

By settling along the creekhead and eating the cordgrass, marsh crabs actually make it harder for other animals, primarily other invertebrates (animals without a backbone like mussels or snails) to live there with them. Cordgrass serves as a physical barrier between hungry animals swimming in the water and the animals living along the banks of the creek, like mussels. When the crabs eat the cordgrass, this barrier is removed. The researchers found that the total mass of animals living along the borders of ungrazed marshes was more than a whopping 600% higher than in marshes that were grazed by marsh crabs. The missing cordgrass meant that snails, mussels, and other invertebrates had nowhere to hide from their predators, like fish or other crabs.

The small but mighty marsh crabs now have a disproportionately large impact on their environment. Sometimes they directly impact the marsh – they reduce cordgrass by eating it and burrowing into the mud. However, many of the things they do indirectly (reducing the number of mussels in the marsh, helping creeks grow and drain marshes more efficiently) may have an even larger impact. This power to shape the foundations of their environment means that the marsh crab could be a new keystone species, or a species which others in the ecosystem rely on. In the past, scientists viewed cordgrass alone as the defining species of salt marshes due to how it provides shelter from predators and also controls water flow through the marshes. By controlling cordgrass, however, the marsh crabs have become more important than ever in these drowning ecosystems.

The times they are a-changin’

Climate change is the reason why marsh crabs are becoming a keystone species. Without it, the soil along creekheads would be too dense for marsh crabs to have a large impact, but as marshes become more swamped by sea level rise, the soil weakens and the marsh crabs can do their work.

This is, however, a temporary condition. Marsh crabs ultimately improve the drainage in marshes by helping to expand the creeks, and the soil eventually hardens again, making it less hospitable to marsh crabs.

Yet this does not necessarily mean that marsh crabs will save salt marshes from drowning. The rate of sea level rise is increasing, and in many places, marshes have not been able to keep up. Coastal ecosystems are in flux, and the future of these lands and their species is still uncertain. Still, as the climate changes, the relationships between species may as well. Who knows? Maybe somewhere else, another small, humble animal has suddenly become key.