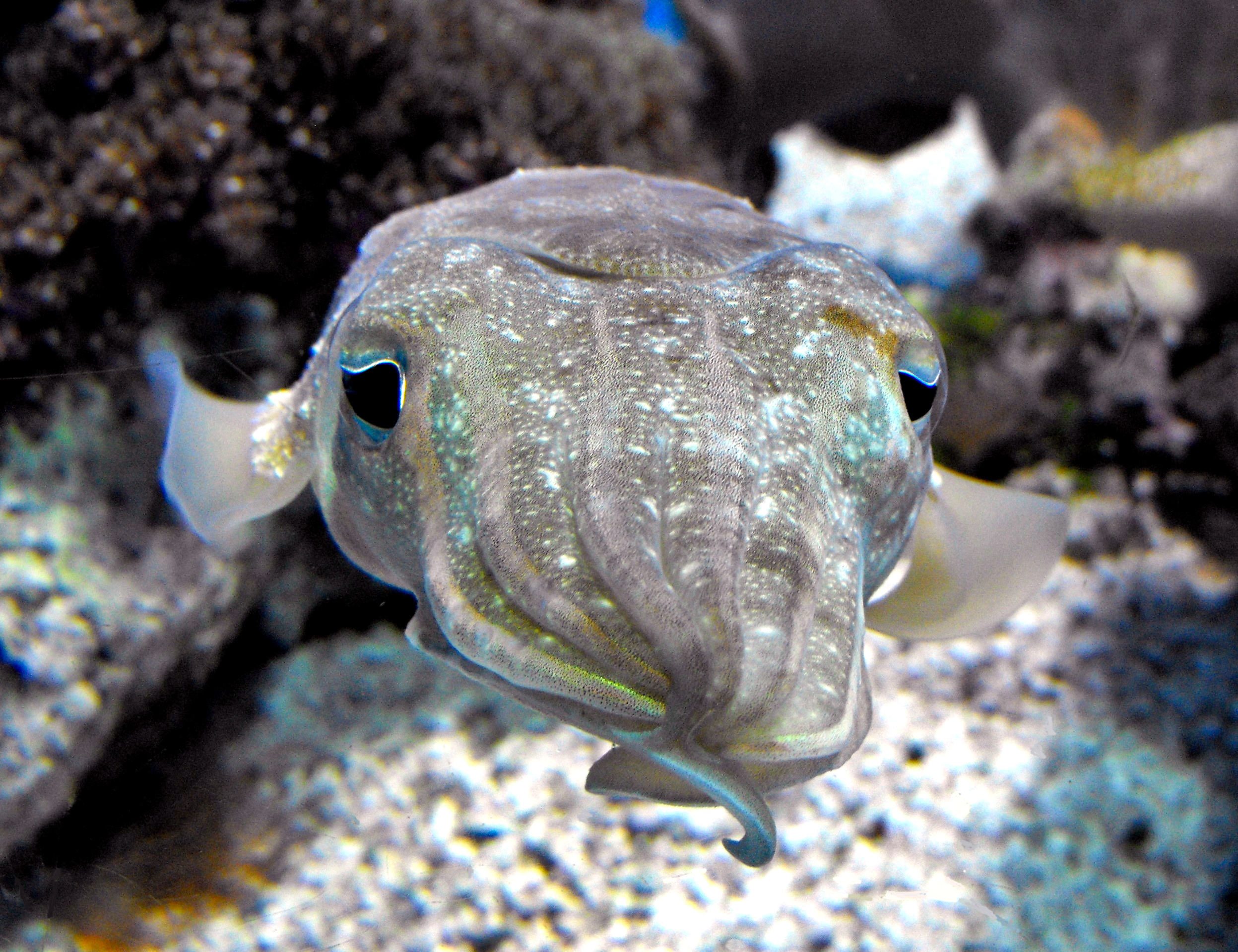 What can animals learn?

Animal learning is becoming an increasingly popular field of science and is expanding our idea of animal intelligence. Many fish species can learn the location of obstacles in a landscape to quickly escape danger, dogs can be trained to understand over one hundred words in a human language, and rats are champions of various maze experiments. But does this animal learning extend to invertebrates, who do not possess spinal columns and are generally thought to be more primitive than their vertebrate cousins? It would seem so, at least in one group – the cephalopods.

Cephalopods include the famous octopuses, who have been shown to display a great degree of intelligence, often wriggling through small holes to escape tanks, or shooting water at light fixtures to extinguish them. Cuttlefish are also members of the cephalopod group, are slightly smaller than octopuses, and are well known for their hypnotic color-changing ability. Cuttlefish are also considered intelligent, most notably in their ability to count the number of shrimp they are about to eat, but their learning and decision-making has rarely been put to the test. To see if cuttlefish are capable of such intellectual pursuits, a research team at National Tsing Hua University in Taiwan devised a series of feeding experiments on Pharaoh Cuttlefish, Sepia pharaonis.

The cuttlefish were raised from eggs in order to control for effects of the environment, and 55 total individuals were used. Cuttlefish were all first placed on one side of a tank, and on the opposite end were two chambers. One chamber had a box containing a single shrimp and the other had a box containing two shrimp. The cuttlefish were making the choice solely based on visual clues and were not actually fed the shrimp after making a choice. Shrimp are a common food item for cuttlefish, so this test was meant to confirm that cuttlefish will choose larger quantities of shrimp to eat, similar to previous studies. Researchers found that about 80% of the cuttlefish chose the chamber with two shrimp.

Then, after being fed, cuttlefish were split into two groups: one which was “primed” before repeating the above experiment, and the other which was not primed – they simply repeated the above procedure a second time. Repeating the experiment without priming was to observe if cuttlefish made the same food choices with full stomachs. In the priming phase, cuttlefish were given the choice of two chambers again, but one chamber had one shrimp and the other had none. When the cuttlefish went to the chamber with one shrimp, the researchers fed them a shrimp, to make this option more valuable to them. If the priming was successful, cuttlefish would learn that choosing one shrimp would lead to an immediate reward, and would be more likely to choose one shrimp when deciding between one or two shrimp chambers.

Results showed that the priming was indeed successful, with around 60% of primed cuttlefish choosing one shrimp over two shrimps in their final trial. On the other hand, the cuttlefish group without priming chose two shrimps about 80% of the time, showing that cuttlefish will still choose a larger quantity of food even when they have recently eaten. So, what does this mean in the context of cuttlefish learning?

How do cuttlefish learn?

The authors present two possible explanations. In the first, cuttlefish are capable of making food related “value-based decision-making”. Under this explanation, cuttlefish can give a perceived value to certain choices (i.e. an amount of food they will receive), and this value can change based on experience. While two shrimp may initially have more perceived value, if a cuttlefish only receives food when choosing one shrimp, that option has a higher value, and will be chosen in the future.

The authors’ second explanation deals with positive reinforcement training. Under this explanation, the cuttlefish learn that when choosing one shrimp, they receive a reward. They will then continue to perform the rewarding behavior in the hopes of getting additional rewards, and eventually perform the behavior simply because they associate it with something positive. This is a type of learning that is very effective in a wide array of animals, and that many of us are familiar with in the context of dog training.

While the exact explanation of how cuttlefish make decisions eludes science for now, it is clear from this experiment that cuttlefish are capable of learning, being trained, and making decisions. They aren’t mindless animals acting purely out of instinct. Science is beginning to reveal that many animals, from tentacled invertebrates to man’s best friend, have a greater depth of intelligence and capacity to learn than previously thought. With new information that will undoubtedly only continue to be uncovered, we will hopefully all gain a greater appreciation for the animals that we share the planet with.