The largest migration on Earth

Every day, microscopic animals in the ocean called zooplankton and fish perform the largest migration on Earth called Diel Vertical Migration (DVM). These aquatic animals rest in the deep waters of the ocean during the day and then migrate to the surface waters at night to feed when they cannot be seen by visual predators. It is estimated that zooplankton migrate about 28 miles per day through this process!

To avoid being eaten, these animals sink into the dark “twilight zone” during the day and then rise to the surface waters to feed on sunlight-fueled phytoplankton at night. Sunlight is the primary cue that initiates DVM but zooplankton and fish can respond to different kinds of light including moonlight or human produced light (think cruise ships or fishing vessels). Many of these migrating animals also have internal rhythms that inherently cause them to vertically migrate even if there is no light, especially in cold, dark polar regions.

Rolling in the deep

It is typically thought that when animals migrate to the “twilight zone”, they essentially take a little nap in the deep ocean to decrease their energy use (migrating 28 miles per day takes a lot of energy!) However, recent research reveals that migrating fish and zooplankton are continuously swimming in the deep ocean in response to cloud-driven light variations that occur at the sea’s surface. Therefore, the presence of clouds in the sky affects animal migration, which was previously unknown.

Scientists from the United States utilized sound in the ocean to measure the distribution and migration of zooplankton and fish in the “twilight zone”. Investigating sound waves that scatter off the layers of zooplankton and fish in the ocean enables scientists to determine the depth at which the animals are swimming and migrating. These sound waves are recorded using a hydroacoustic sensor that can track emitted sound in the ocean. Scientists placed a hydroacoustic sensor, as well as a light sensor, on a research ship in the Pacific Ocean to compare sound and light measurements. The light sensor detects the amount of sunlight reaching the ship and the light level measured changes depending on how many clouds are in the sky. The purpose of this comparison is to detect a potential relationship between plankton and fish movement (measured with sound) with sunlight that reaches ocean depths.

The importance of clouds on marine life migration

This research reveals that migrating animals in the ocean are much more active during the day than previously thought. The increased activity could increase the predation risk for these animals by carnivorous zooplankton, large fish, and marine mammals. It also shows that these migrating animals use more energy than previously thought to maintain their metabolism (e.g., breathing and peeing) during the day. Given that the “twilight zone” is very food limited, migrating animals may have to eat more food at night, when they migrate to the surface, to compensate for the energy they expended in the deeper ocean. Since this study was only performed in one location in the Pacific Ocean, the scientists encourage similar research to be conducted in other oceans to confirm whether clouds affect animal vertical migration throughout the global ocean. 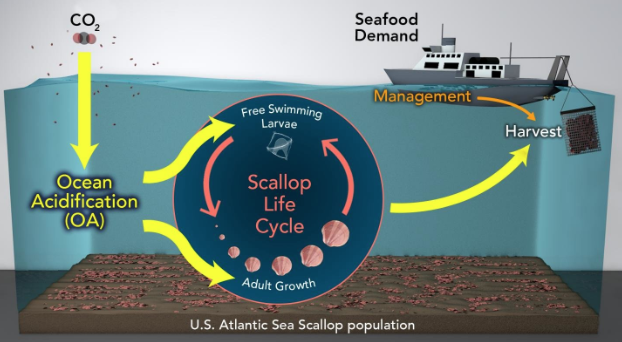