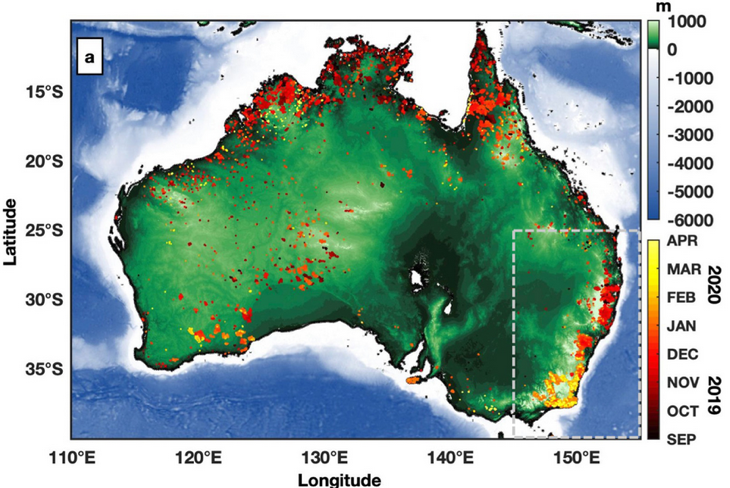 Forest fires are a common natural hazard globally, prevalent in regions with low rainfall and humidity, such as northern Australia, western North America, and central Africa. These fires can be more severe and occur in areas with few historical fires with the changing climate. Severe fires often have disastrous impacts, including pollution, warming, loss of lives and economy, and changes to the ecosystem. The Australian forest fires that burned from September 2019 to March 2020 attracted international attention. The fires affected an area roughly equal to half the size of Greenland (200,000 sq km) in the northern and eastern regions of Australia (Fig. 1). While the fires are common in north Australia, these eastern fires were most likely exacerbated by the extreme drought conditions over the last 60 years.

Although severe and uncontrolled fires can be devastating to the forest ecology, they may not be all bad. Fire smoke contains tiny particles (aerosols) rich in plant nutrients such as nitrogen, phosphorous, and iron that travel large distances with the winds. These particles tend to fall out on their own or with the help of the rain along the way. When these particles fall out over the ocean, they can “fertilize” the seawater. Phytoplankton, the microscopic organisms that form the base of the marine food chain, are often limited by the low availability of iron in the Southern Ocean. An enhanced iron supply—provided from the fall-out of wildfire smoke, say— could result in an explosion of phytoplankton growth that would increase the uptake of carbon from the atmosphere as the phytoplankton photosynthesize. The removal of excess carbon dioxide from the atmosphere could prevent global temperatures from increasing. To test this idea, a team of researchers led by Yuntao Wang followed the trajectory of aerosols from the fires in eastern Australia and looked for indicators of phytoplankton growth.

The team observed higher than average concentrations of aerosols in the atmosphere following the fires, rising as high as a few thousand meters above the burned region in a day. The aerosols from the eastern Australian fires traveled southeastward with the wind into the Southern Ocean and reached South America within a week (Fig. 2).

Using the satellite data, the scientists noticed that phytoplankton growth was 140 % higher than usually observed in this part of the Southern Ocean. Interestingly the phytoplankton growth persists for a while after the reduction in aerosol concentrations due to the recycling of nutrients by phytoplankton over a few generations (Fig. 3).

Notably, the team tried to understand if the amount of carbon lost to the atmosphere during burning was compensated by the carbon uptake by enhanced phytoplankton photosynthesis. About 80 % of the eastern Australian forests are comprised of various species of Eucalyptus. The team utilized the previously available information on the varying carbon content of the vegetation in the burned area and estimated about 321 Tg carbon (1 Tg = 1 billion kg) was lost to the atmosphere. Similarly, the team tried to calculate the amount of carbon taken up by phytoplankton. Indeed, the phytoplankton growth was able to take up nearly that much released carbon!

The authors have pointed out the possibility of an over or underestimation of the carbon capture by phytoplankton with the currently available satellite chlorophyll data. They have suggested that the calculations could be more accurate by utilizing the data from the observational system installed in the oceans rather than the satellites. Nevertheless, the study reveals the significance of the oceans in mitigating the effects of environmental pressures and preventing a sudden increase in the carbon levels in the atmosphere, which primarily drives climate change.