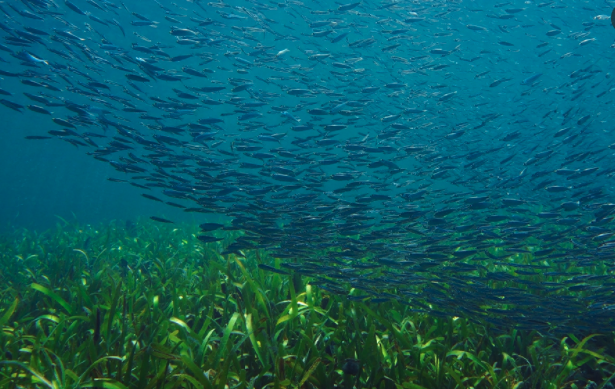 Seagrass beds are highly valued for their ecosystem services related to nutrient cycling and provisioning resources and habitat for other species. Globally, seagrass distributions have drastically declined leaving behind unvegetated but potentially suitable habitat. The effectiveness of seagrass conservation management such as safeguarding suitable habitats is often hampered by the lack of systematic documentation of historical seagrass distributions and by changes in environmental conditions in space or time. Another complication is that seagrass distributions in energetic environments like intertidal zones show local extinction-colonization dynamics which necessitates identification and protection of vegetated and suitable unvegetated habitat. To identify habitat where populations are likely to establish and persist, habitat distribution models (HDMs) can be used.

How do we obtain these predictions?

Well, to obtain predictions that are accurate beyond the training area, HDMs need to be generalizable or transferable between geographical areas. However, spatial and temporal heterogeneity (the quality or state of being diverse in content) in ecological relationships and environmental conditions may limit transferability leading to biased predictions. For instance, associations between variables may exist in a narrow geographical range but may not hold under a wider range or vice versa. Accuracy assessment and model selection on the basis of non-random cross-validation (arbitrary data for testing a model’s ability to predict on a brand new dataset) has been proposed to reduce the risk of overfitting (when a function is too closely aligned to a limited set of data points) and to improve transferability (knowledge gained while solving one problem and applied to a different but related problem) through space and time.

The geomorphology and sediment properties of soft sediment intertidal systems are controlled by hydrodynamics. Steep slopes occur at and near gullies where tidal currents are strong while shallow slopes occur in calmer areas. Therefore, the slope can be used as a proxy for past and present hydrodynamics and thus be used to predict seagrass distributions. Seagrass is expected to occur in areas with shallow slopes only; it is not assumed that the slope per se affects seagrass. The median grain size and mud content of the sediment can also be used as a proxy for hydrodynamic conditions. In addition, the sediment properties themselves may affect seagrass growth and occurrence and, vice versa, seagrass may affect sediment properties by promoting accretion of fine particles. However, in the Wadden Sea, the accumulated fine sediments are released during winter when the above-ground parts of intertidal seagrass meadows dissipate. Therefore, the sediment properties were modeled as exogenous factors (relating to or developing from external factors). 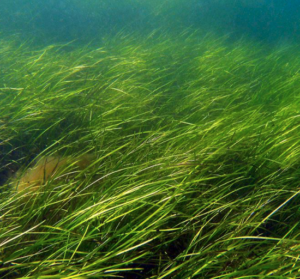 Zostera plants tolerate a wide salinity range. To allow for the recovery of seagrass populations, there is urgent need for identification of suitable habitat. Folmer et al. developed a robust consensus habitat suitability model for intertidal seagrass by combining five HDMs tuned on the basis of transferability performance. Their team identified areas of high suitability in the Wadden Sea where seagrass meadows may establish and persist. They also discussed the methodology and possible causes of the absence of seagrass meadows in the southern Wadden Sea. 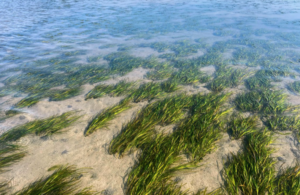 Hydrodynamic stress limits the distribution of seagrass by preventing establishment and damaging and uprooting of plants. In intertidal systems, hydrodynamic stress increases along the depth gradient towards the subtidal area. This team model seagrass distributions under the assumption that the hydrodynamic factors are exogenous, independent forcing factors. However, when discussing the modeling results, we keep in mind that seagrass meadows locally affect hydrodynamics and that feedbacks may exist.

Both Zostera species can have annual and perennial life cycles in the Wadden Sea. However, the smaller Z. noltii often survives winter with rhizomes, while Z. marina largely recruits from seed each year. The predominantly subtidal, perennial morph of Z. marina went extinct during the 1930s and never returned in this area. Eutrophication was an important factor causing declines of intertidal Z. noltii and Z. marina populations between the 1970s and 1990s. It led to higher densities of epiphytes growing on seagrass leaves and increased growth of green algae that smothered seagrass beds. The nutrient loads may have also affected seagrass physiology because the metabolism of seagrasses is adapted to low nutrient conditions.

Data from disparate (dissimilar) seagrass surveys in the Wadden Sea are available in grey and formally published literature. Dijkema, van Thienen & van Beek (1989) compiled data from various intertidal surveys between the 1950s and 1970s. Because declines probably already took place before this period, our knowledge of past distributions remains limited. It is clear, however, that seagrass extents in the southern Wadden Sea have remained low which has triggered substantial conservation concern and restoration efforts in the Dutch Wadden Sea. Up until now, restoration efforts have failed to establish new persisting seagrass meadows. In the northern Wadden Sea, however, seagrass extents have increased and the total surface area is currently larger than in the 1930s.

A comprehensive framework for modeling seagrass populations requires not only insight into habitat suitability but also understanding and quantification of demographic processes including actual and potential dispersal between source and sink locations. An interesting challenge is to further develop the modeling framework and data collection so that the relationships between habitat and demographic variables can be taken into account. Although integration of slow and fast and of exogenous and endogenous variables is not easy, the team expects that this type of refinement not only improves predictions of habitat suitability, but will also allow for more realistic metapopulation (a regional group of connected populations of a species) models which may help to provide insight into the reasons why seagrass meadows have not established on the extensive areas of seemingly suitable habitat in the southern Wadden Sea. Dr. Folmer recommends that the production and dispersal of seagrass propagules are included in monitoring programs so that source–sink dynamics (that is, how variation in habitat quality may affect the population growth or decline of seagrasses) can be modeled by integrating HDMs, transport models and distribution data.