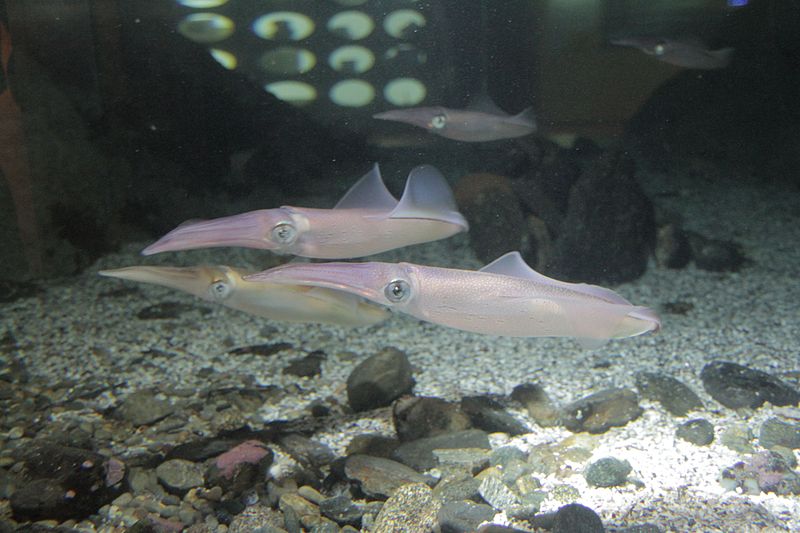 Squids, along with their octopus and cuttlefish cousins, are the most intelligent invertebrates in the world, exhibiting complex problem-solving and learning abilities that rival those of vertebrate animals. These animals are cephalopods—relatives of clams and snails. Cephalopods have independently evolved highly complex nervous systems, unrelated to vertebrate brains but equally powerful. Cephalopods have also independently evolved complex image-forming eyes. These examples of “convergent evolution” (when a trait evolves independently in two or more unrelated organisms) have fascinated marine biologists and neuroscientists for decades. Cephalopods also have their own unique characteristics, such as the ability to change their skin colour at will, that make them some of the most beautiful and charismatic animals in the ocean. We still have a lot to learn about how complex traits, such as intelligence, vision, and camouflage, evolved and operate in cephalopods.

One way that scientists learn about a trait is by measuring “gene expression.” DNA contains all the instructions for every gene in our body, but RNA is the molecule that begins the process of turning those instructions into function. Measuring the amount of different RNA molecules (AKA gene expression) tells us which genes are turned on and which genes are turned off in a given sample. Over the last several years, improvements in technology have allowed scientists to measure gene expression in thousands of individual cells, giving an unprecedented and detailed picture of the different cell types that make up our bodies. Scientists have recently begun to use this single-cell sequencing in marine species, including cephalopods, and this technology promises to uncover new details of the cell types that underlie the unique physiology of these animals.

Figuring out the cells that make squids tick

In a recent study, scientists set out to sequence cell types in the common squid species Loligo vulgaris, AKA the European squid, which is an economically important commercial fishery. Specifically, the researchers collected data from the heads of young squid, allowing them to focus on the nervous system. The researchers ended up with gene expression data from 20,000 unique cells. To analyze single-cell data, scientists use algorithms to group cells together based on the similarity of their expression profiles, and they can then assign cell types to different identities based on the genes that are expressed in each group. For example, scientists might know that a particular group of cells is a neuron because it expresses genes that we know from other studies are only found in neurons. Once they determined what genes are expressed in a given cell, the researchers then used a technique called “in-situ hybridization” to figure out where those genes are expressed in the body. This helps confirm that cells we think are neurons are actually expressed in the brain, for instance.

When all was said and done, the scientists ended up with an “atlas” of many different cell types. They were able to describe some basic cell types that squid share with other animals—neurons, muscle cells, skin cells, etc.—and also explored cephalopod-specific cells, including colour-changing chromatophores and sucker cells found on the tentacles. Interestingly, even familiar cell types from other animals had a cephalopod-specific twist: some cells expressed known genes as well as “unknown” genes found only in cephalopods. For the most part, we don’t know what these cephalopod-specific genes do.

A roadmap for future discoveries

All in all, this study generated a huge amount of data and serves as a foundation for future studies of specific tissues in squid. Scientists will use these data to identify new genes with possible functions in learning, camouflage, or vision—and possibly to identify entirely new cell types that contribute to cephalopods’ unique biology. Focusing on the nervous system, for example, this study found different subtypes of neurons that express distinct combinations of genes and are physically located in different areas of the brain. This kind of detailed mapping of the squid nervous system will help other scientists learn about how these animals got to be so intelligent.