You may have heard of glowing tides (Figure 1) and the light show deep-sea fish put on to lure in prey or warn off predators (Figure 2).  The method those organisms use to generate light is called bioluminescence, the production and emission of light through a chemical reaction.  Fish produce this light with a compound called luciferin, either on their own, or by a symbiotic bacteria contained in their photophores, light-emitting cells.

It has been well-established that some sea creatures, mainly corals and anemones, use a different technique to produce a marine glow – biofluorescence.  Instead of chemically generating light, biofluorescence is the absorption of electromagnetic radiation and the subsequent reemission of a longer and lower energy wavelength.  In other words, this is the absorption of blue light (450-495 nanometer wavelength) and emission of green (495-570 nm), orange (590-620 nm), or red (620-750 nm) light.  The marine environment is a spectrally restricted visual domain, meaning that with depth, red, yellow, and green components of sunlight are selectively removed.  Only a narrow band of blue light remains down to the reach of the photic zone, which is why we see the ocean as the wide blue yonder.  This is also why many deep-sea organisms find it advantageous to be colored red, thereby effectively disappearing into their surroundings.  Biofluorescent organisms use these light properties to their advantage, possibly for photoprotection, antioxidation, visual contrast, or coral health.

In a study published January 8th, researchers found that biofluorescence reaches far beyond corals, and is, in fact, “widespread throughout the tree of life for fishes.”  While previous observations of shallow reef fishes revealed the ability for some species to fluoresce a red glow, the same as chlorophyll, it wasn’t until the discovery of a fluorescing eel near Little Cayman Island that researchers realized fish could fluoresce in green, or even combinations of green and red or orange (Figure 3).  This prompted an investigation into both shallow and deep-sea fish near the Bahamas, Honiara, the Solomon Islands, and the Cayman Islands from 2011-2013.

Just this limited survey revealed as many as 180 species of biofluorescent fishes in 16 different orders. Both cartilaginous (sharks, rays) and bony (eels, gobies, flatfishes, lizardsfishes) fishes showed the ability to glow.  The most commonly fluorescing fish were those that, in white light, appeared to be camouflaged, or “cryptically pigmented”, against the reef environment.  Not only that, but these fish also exhibited the greatest variation in glow patterns: seemingly similar fish to the human eye, under blue light revealed strikingly different fluorescent patterns, indicating that these signals are unique to specific species (Figure 4).

Scientists hypothesize that some fish are using fluorescence for additional camouflage against biofluorescing coral reefs (Figure 5), while others may exploit this ability to provide a visual contrast for intraspecies (within species) recognition and communication.  Certain marine fishes may even use it for recognition during spawning, utilizing the light from the full moon to reveal themselves only to their own species.

If fluorescence is fueled by blue light, then what about those deep-sea fishes investigated in this study, those beyond the reach of sunlight?  It turns out, even fish swimming at depth can produce a glow.  Some are thought to maintain biofluorescence only as a remnant of their relation to near-surface fish and were only revealed to glow when the researchers shone LED blue light on them.  But others have developed the ability to fuel their own communicative glow through a combination of bioluminescence and biofluorescence: they chemically produce the very light they need to absorb for reemission as red, green, or orange fluorescence.

In addition to insufficient blue light stimulation, a reason why scientists had not discovered this widespread glowing before may have been because many signals are species-specific, and you need an invitation to see the message…or at least have evolved with the appropriate vision.  Many marine fishes possess yellow filters in their lenses or corneas which could enable enhanced perception of biofluorescence in the ocean.  This visual advantage can enable them to see fluorescence patterns invisible to other fishes and predators that lack such visual specialization.  In order for researchers to see the glow, they had to scan the collected fish with bright LED light sources to provide the blue light required for fluorescence, then observe the glow with emission filter glasses.

Aside from being just plain cool and adding yet another reason to the list of why the ocean is awesome, this research provides new insight into the function of light and vision in marine environments, complex species interactions, and the evolutionary pathways of marine fishes.  It also provides researchers with the opportunity to continue investigations into the chemistry of biofluorescence, useful for “illuminating” other biological processes.  For additional links and beautiful pictures, check out the recent NYT article on the subject.

I have a M.S. from the University of Rhode Island Graduate School of Oceanography, previously working with Dr. Rainer Lohmann. My research focused on the distribution and fate of organic pollutants, including fossil fuel emissions, flame retardants, and pesticides. With an undergraduate degree in geology, I am interested in water resources and quality. I enjoy discussing the wonders of the environment with others and going on adventures. 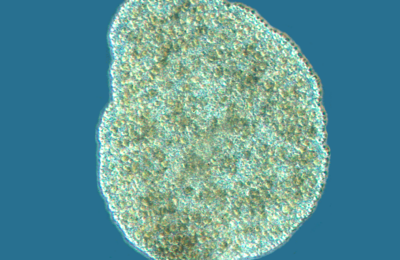