We are already one month and two named tropical storms (Ana and Bill) into the 2015 North Atlantic Hurricane Season, and for U.S. east coasters a quiet season is a good season, (though my fellow surfers may argue otherwise). Tropical storms and hurricanes, commonly referred to as tropical cyclones in other parts of the world (Fig. 1), can be extremely powerful and devastating to coastal communities. Storm surge, enormous waves, unrelenting winds, and flooding rains are just some of the hazards associated with these storms. These forces threaten the infrastructure of even the most developed nations. Tropical cyclones require warm sea surface temperatures to develop and strengthen. For this reason, scientists and policymakers alike have shown great interest in understanding how climate change will affect the number and strength of tropical cyclones around the world.

Climate scientists have determined that globally ocean surface waters have warmed by approximately 0.5 °F over the past 30 years. Considering that hurricanes require warm ocean temperatures, this increase in surface ocean temperature has sparked interest in how tropical cyclones have responded over this same 30-year period. Recent theoretical studies conclude that the frequency of tropical cyclones should decrease with warming oceans due to changes in atmospheric structure that are less conducive to tropical cyclone formation. There is one major caveat: The intensity of the storms are predicted to increase. It is important to note that these studies were theoretical – they did not use real observations of tropical storms.

Kang and Elsner’s findings were similar to previous studies: Warmer oceans lead to stronger, but less frequent tropical cyclones. They determined that there were 6.1 fewer tropical cyclones due to the 30 years of warming oceans, and that the storms packed winds that were approximately 3 MPH stronger over the same period. Importantly, there was no change in overall activity, just a trade-off between of frequency and intensity.

Most importantly, Kang and Elsner propose a mechanism for the trade-off between tropical cyclone wind speed and frequency. The increased warmth in the surface ocean leads to more evaporation of moist air to the lower-most atmosphere, but warmer and drier conditions (strong high pressure) exist just above acting as a barrier to moisture and tropical cyclone formation.  This atmospheric configuration is unstable, so storms that are able to overcome the high pressure barrier are greeted with conditions ripe for efficient intensification.

The authors report their findings of less frequent but more intense storms as a globally averaged pattern. They also looked at how each ocean contributes to these findings. The North Atlantic was by far the most dominant contributor to the global trade-off of tropical cyclone intensity and frequency (Fig. 2).

A commonly discussed implication of human-caused climate change is the potential for more intense and frequent storms. This prediction is of great concern, with Hurricane Katrina and Superstorm Sandy fresh in the minds of many Americans. This study brings observational evidence to an existing theory that warming oceans will reduce the frequency of tropical cyclones, with the trade-off being an increase in the intensity of the storms that form.

Are our communities prepared for stronger storms? Share your thoughts below! 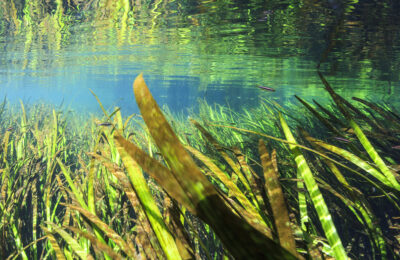