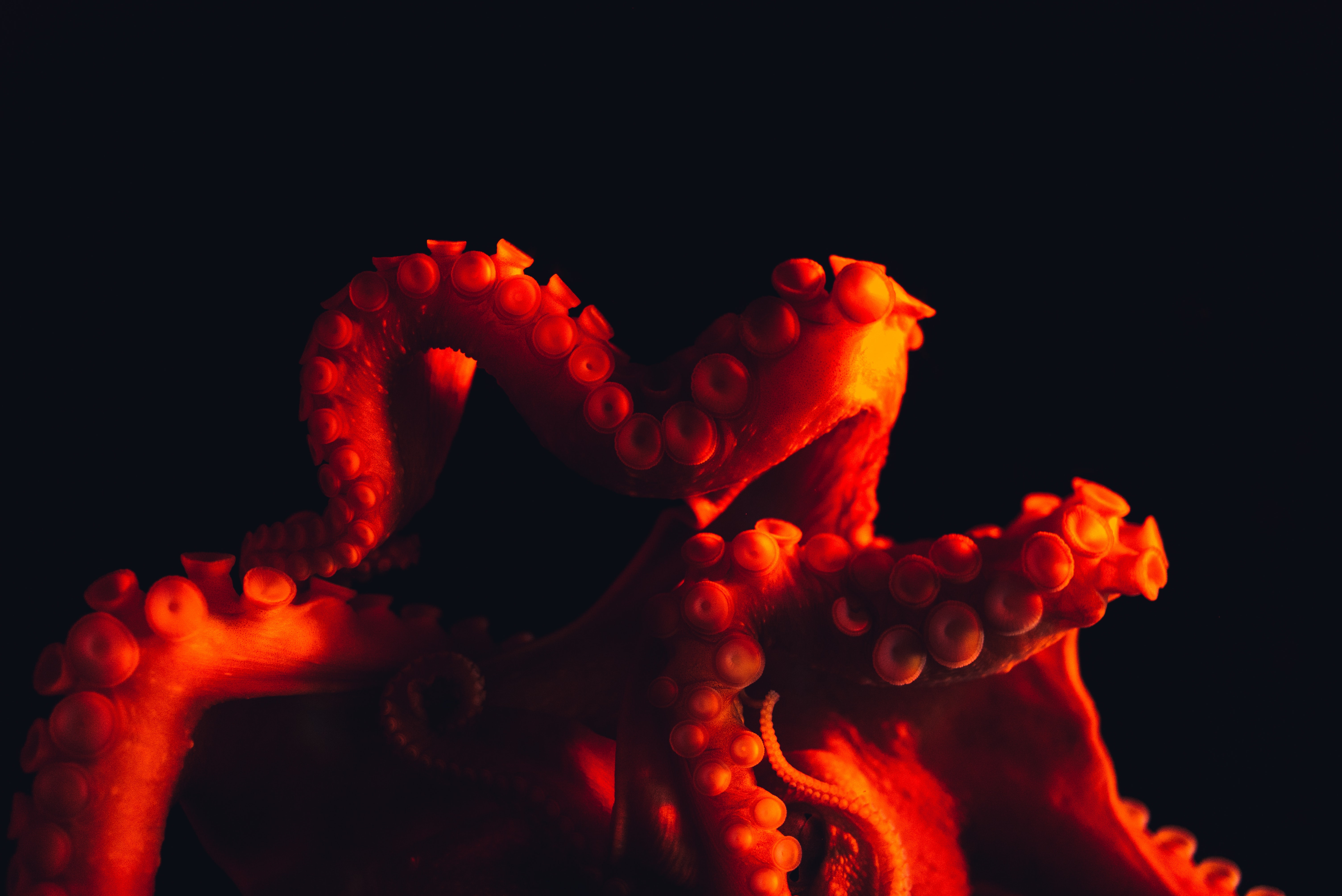 Octopuses are in the Phylum Mollusca, meaning they are distantly related to slugs and snails! The giant Pacific octopus is the biggest species, usually weighing approximately 30 pounds and spanning 14 feet. There are over 300 recognized species of octopuses. Octopuses have two eyes, a beak, 8 arms, and no spine! This allows them to rapidly change shape and squeeze into small spaces.

Octopuses are one of the most intelligent invertebrate (spineless) species with a very complex nervous system. The majority of octopus neurons are found in their arms, which can act without input from the brain! The arms are also covered in suction cups and receptors so they can feel textures, smell, and taste everything they touch.

Despite all this information the arms collect, the octopus has poor proprioceptive sense – the ability to detect self-movement and location. What does this mean? The arms are able to tell what they are touching and how stretched out they are, but the ‘brain’ cannot visualize this information.

Check out These Fun Videos

Opening a jar (from the inside!): https://earthsky.org/earth/watch-octopus-open-a-jar-from-the-inside

Here, the authors wanted to test whether octopuses were able to use only touch information from a single arm to direct its movement. To do this, they created a maze with a central tube and two side tubes with ‘goal boxes’ at the end. The maze was opaque to avoid visual information, and the goal boxes had removable nets to block food.

The octopuses did pre-training exercises in which they explored the maze with a single arm, recovering treats all the way down all tubes. Once treats were recovered for several trials, they were ready to move on. The next step was side preference training. Each time an octopus stuck an arm down one side tube and recovered a piece of food it was recorded, snacks were replaced, and the trial was over. Side preference testing was done 20 times for each individual.

During the first of the true trials, food was placed in both goal boxes, but one was covered with the net so the octopus could not take it. This was done to ensure that any chemical signals would be the same in both tubes (e.g., smell). For proprioception (ability to detect self-movement and location) testing, food was available to the octopus in only one of the side tubes. If the octopus made the correct choice they were rewarded with the snack. If they made the wrong choice, the maze was immediately removed. In the next trial, the food was placed on the same side. This was repeated 10 times per day until the octopus was able to show learning (80% correct in a single day). In order to be successful, the octopus would have to be able to associate the arm movement with the collection and subsequent eating of the food, without being able to see the arm or foods location – thus showing proprioceptive learning. Five out of six of the octopuses were successful. Since octopuses are not believed to be able to create mental images, the authors suspect that this is accomplished by learning a general direction and type of movement. To test this theory perhaps they could use a more complicated maze system.

Next, they moved on to tactile experiments. Here, one of the tubes was covered in a rough texture, while the other remained smooth. Half of the octopuses were trained by having the reward in the rough tube, and half the smooth tube. Again, this learning was repeated until they were 80% successful in a single day. Five octopuses made it to the second stage. A success resulted when an arm was inserted into a tube, the texture was explored, and the arm either: continued to the reward if it was the correct tube or, switched tubes if it was the wrong one