If you grew up in the developed world, chances are you have an intimate relationship with plastic. Your lunch container, your childhood toys, your coffee press, that sweater you just bought, and the packaging it came in – they’re all made of low-cost petrochemical derivatives.

And they’re swamping our oceans in a pollutant the Earth has never seen before.

Global production of plastic has increased by more than 50X since the new material took the developed world by storm in the 1950s, and is expected to grow by another 9% every year as developing nations begin to adopt the technologies and lifestyles that promote a need for plastic products.

Not surprisingly, plastics now make up the majority of the items commonly found in beach cleanups. In some places, notably ocean gyres like the famous Pacific Garbage Patch, plastic pollution is so abundant that there are more plastic particles per area of water than plankton.

Plastic is different from other kinds of pollution. It doesn’t decompose into its constituent ingredients. Instead, it photodegrades in response to light and breaks down into smaller and smaller pieces of intact plastic.

That means that a piece of plastic that doesn’t get eaten by or entangles an unfortunate marine animal is destined to turn into a kind of fake plankton, microplastic particles so small that they might be eaten by filter-feeding krill or other shellfish.

For many marine animals, the simple consumption of plastic particles can be disastrous, as they can get lodged or tangled in the digestive tract or slowly starve an animal by taking up valuable room meant for real food. For others, the indirect effects of plastic pollution are just as deadly.

Small plastic particles act the same way that marine sediments do, adsorbing and transporting other dangerous pollutants like heavy metals.

So if the plastic wasn’t bad enough, many marine animals are also consuming dangerous amounts of secondary pollutants that can bioaccumulate up the food chain. Animals that consume contaminated food items end up with larger amounts of pollutant in their tissues, and the animals that eat them end up with even more.

Though we might not think of ourselves as marine animals, humans are at the top of most marine food webs.

Plastic pollution is easy to ignore when it’s happening to another animal, far away in the reaches of the mid Pacific, but not so easy when more and more microplastics are turning up in the drinking water of our cities. I found this particular microfiber during a student field trip to an urban wetland in the Halifax core earlier this Spring. While they didn’t immediately care about the effect this fiber might have on the invertebrates, fish, or ducks in the wetland, when I asked my students if they would eat a fish from the wetland, or if they would drink the water, they quickly changed their stance from disinterested to alarmed. “I don’t want to eat plastic!”

We probably are though…

Oysters are filter-feeders – they take in their food directly from the water through strainer-like mouths. This puts them (and us) at risk of microplastic consumption. Kazmiruk et. al. sampled a number of sites throughout the shallow Baynes and Lambert areas, separated the sediments by grain size, and then floated the microplastic particles in the samples so that they could be retrieved.

As many as 25,000 microplastic pieces per kilogram of sediment were found in the Baynes and Lambert samples.

Microbeads, small round particles, were found in the greatest amount, followed by microfragments and microfibers, and at all sites. Baynes Sound sites contained the greatest number of all three microplastics.

This region is dense with shellfish aquaculture, a fact that may not be a coincidence. Aquaculture operations (and other fisheries) use plastic-derived ropes, nets, cages, buoys, boat cleaning supplies, and other tools as common practice and have since the 1940s. Kazmiruk also listed urban sites as potential sources, including runoff collected via the Courtney-Comox estuary.

Previous studies have found microplastics in the tissues of farmed shellfish, including blue mussels, oysters, and clams. Oysters seem to be particularly vulnerable to microbeads, containing more of these particles than other shellfish, while mussels and clams seem to contain more microfibers.

The density of oyster farming in the Baynes and Lambert areas and importance of this industry in British Columbia puts Kazmiruk’s results in a context that should alarm us.

Plastic pollution is an inevitable reality of our modern times. Years of industrial convenience has left us with a pollutant that cannot be converted into something else, cannot be removed, and that pervades every environment on Earth. While we’ve known about microplastics for some time, plastic consumption continues to grow and good recycling practices are at an all-time low.

For this, and many other important reasons, World Oceans Day this year has adopted microplastic pollution as it’s theme. It’s time we made a change.

Kazmiruk’s study and those like it may be the kick it takes for us to care about the problem. My city-dwelling students might have been underwhelmed by the invertebrates, fish, and ducks we observed that day in our local pond, but it was obvious that they cared about water quality.  Faced with the degradation of their own food and water sources, maybe more people will adopt values that lead to  sustainable behaviours. I hope so; it would be a shame to lose oysters to our need for take-out containers.

For information on how you can reduce your plastic intake, visit World Oceans Day. Start today! 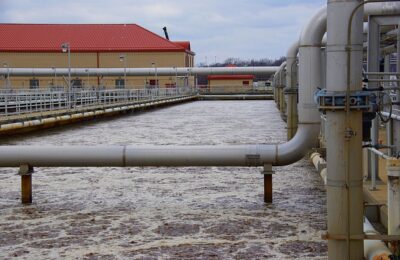