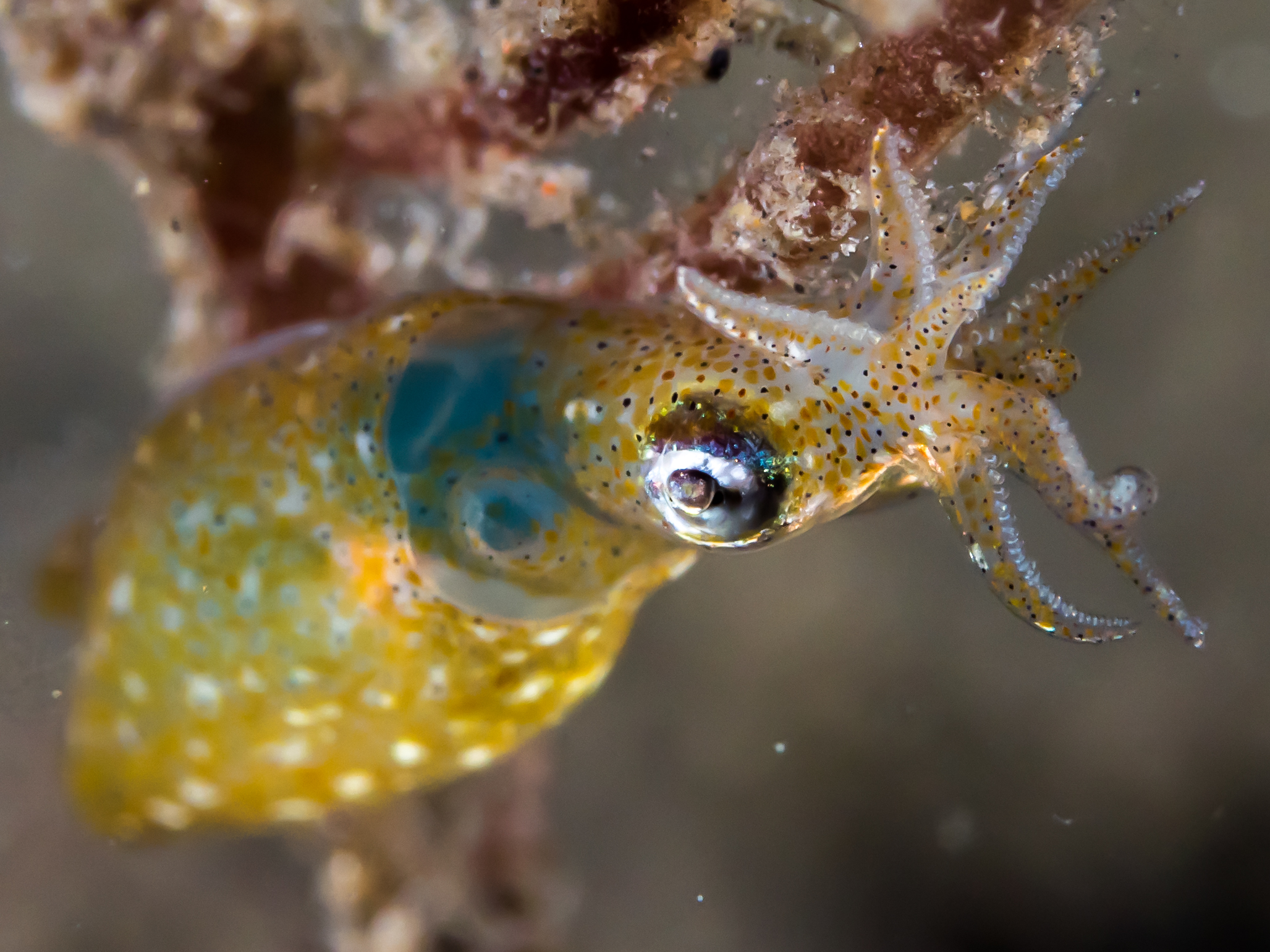 Nestled in seagrass and darting through Indo-Pacific, nearshore waters, two-toned pygmy squids are miniscule cephalopods that represent a much larger problem afflicting our ocean: ocean acidification’s impact on productivity.

The ocean is a critical, natural carbon sink, soaking up excess carbon dioxide like a sponge. Because of unprecedented man-made greenhouse gas emissions, the ocean’s carbon uptake has skyrocketed. Atmospheric carbon dioxide (CO2) dissolved in water (pCO2) binds to water to form carbonic acid, which lowers the ocean’s pH ­– making it acidic.

Another one of climate change’s impacts, ocean warming, has already resulted in well-documented effects on marine productivity. A 2019 report detailed how historical warming has thrown many commercially viable fisheries off balance, shifting where populations aggregate and either reducing or increasing population reproduction. While many species have suffered under ocean warming, such as cod species, some either thrived or remained normal – such as jellies or the Yellow kingfish.

Ocean acidification has similar, documented effects on marine populations. Cephalopods, hypothesized as a class which might thrive in warmer waters, may alternatively suffer from increased pCO2 and consequent ocean acidification.

A not-so-small finding for pygmy squids

Demonstration of and future possibility for climate adaptation

Spady et al. (2020) explain that the study’s findings could result from adult squid efforts to reallocate energy. While increased pCO2 concentrations do not increase oxygen uptake or metabolism rates in adult two-toned pygmy squid, they do increase squid activity and potentially acid-based regulation – both which would increase energy expenditures. Diminished energy could result in reduced reproductivity. Additionally, how close eggs were laid together and egg swelling could both demonstrate adapting to or coping with higher concentrations of pCO­­2.

Spady and his team also provide an alternate theory. Since two-toned pygmy squid are iteroparous, which means they can reproduce multiple times throughout their lives, they are able to adapt to high energy-costing environmental situations like elevated pCO2 by reducing reproductive output. This is an adaptation that semelparous cephalopods, those that only reproduce once in their lives, do not have, as these species put all their energy into one reproductive output and perish afterwards.

There are a few limitations to Spady et al.’s (2020) study. The scientists only test two generations of two-toned pygmy squids in high pCO2 conditions: the adult breeding pairs and the embryos. Therefore, the team is unclear whether these negative impacts would extend past the studied generations, or if they would eventually diminish through consequent reproduction.

Additionally, cephalopods have incredibly short lifespans – a reason why scientists believe they are fit to adapt to and thrive in warming oceans. Two-toned pygmy squids live an average of 90 days. Paired with the fact that their natural environments experience day-time fluctuations in pCO2, this species of squid may be primed to evolve and adapt to elevated pCO2 and ocean acidification the same way they are thought to be primed for adapting to warmer oceans. Spady et al. (2020) explain that a 90-day life span allows two-toned pygmy squids to complete more than 300 generations by 2100, which allows significant opportunity for adaptation. These negative effects may ultimately be just as short lived as the pygmy squid itself.

Spady et al.’s (2020) study demonstrates that increased pCO2 and ocean acidification’s effects are just as complex as ocean warming. With the IPCC’s latest Special Report on the Ocean and Cryosphere in a Changing Climate, it is clear that the ocean is one our natural resources facing the brunt of climate change. Marine species productivity and reproduction is just one of the ways we can see how the ocean is shifting under the pressures of increased greenhouse gas emissions.