Excerpt: Chemistry is important for a lot of things, but can it change the behavior of animals? Read on to find out how changes in water chemistry alters the behavior of a venomous cone snail!

Ocean acidification, a “side effect” of climate change that we at Oceanbites have written about a lot (for more info: here, here, here), has been shown to be bad for animals for many different reasons – it can weaken shell building, slow growth, and reduce reproductive success. More carbon dioxide (CO2) in the water (creating a more acidic environment) means that it’s harder for animals to maintain healthy bodily functions. Less studied, however, is the effect of ocean acidification on behavior.

What research has been done shows that behavior is extremely sensitive to CO2 levels. This is partially due to the effects of CO2 on neurotransmitters, chemicals that the brain uses to relay messages and information. Studies have shown that neurotransmitters in both vertebrates and invertebrates are affected by the higher levels of CO2, suggesting that behavioral issues could be a widely dispersed problem in oceanic food webs. If predators AND prey are confused by the effects of ocean acidification, food web dynamics are going to be a lot harder to understand.

Most studies out there on behavior alteration have been done on prey species – I myself wrote an article about how this was tested in fish species. The authors of this study wanted to do something different, and instead focused on an invertebrate predator: the venomous cone snail (Figure 1). The goal of the study was to understand whether cone snail behavior would be altered at CO2 levels expected by the end of the century.

To figure that out, the authors exposed cone snails to control water (with 400 µatm CO2, similar to today’s atmosphere) and acidic water (1000 µatm CO2, levels expected by the year 2100) and tracked their behaviors. First, they looked at general behavior over a 15-minute time span. They were looking for any changes in the snail’s distance travelled, speed, direction, time to bury in the sand, or amount of time spent buried in the sand. All of those behaviors are important to the snail’s survival and foraging technique.

Then, they gave the snail a chance to be a predator under either control or high CO2 conditions. They placed the snails in a tank with their main prey item, a conch snail, and watched the drama unfold over a 32-hour span of time.

The general behavior of the snail didn’t change too much when they were exposed to the more acidic water. The biggest change was in the amount of distance traveled and the average speed: in high CO2 (acidic) water, snails moved 3-4 times further and faster than it did in control water (Figure 2). A behavior change like that could make a big difference to the snail – moving more frequently requires more energy, and more energy means that the snail has to eat more food.

But, does moving farther and faster help the cone snail find and consume more prey? The results seem to be leaning towards no. Cone snails are usually ambush predators – they’ll bury themselves in the sand and wait until their prey gets close, then STRIKE! The prey is toast. During the 15-minute trial of behavior, though, the cone snails in more acidic water reduced the amount of time they spent burrowing (Figure 3), and more time exposed to both larger predators and prey. Unless moving faster and farther is helping them get more prey, the high CO2 seems to be a detriment to their main foraging strategy.

When the authors looked at the 32-hour trial with the cone snail and its prey, they found the same movement trend – snails in more acidic water moved a lot more. But, that movement didn’t get them any closer to their prey item! The control snails and the more acidic snails were about the same distance away from the prey item, even though the more acidic snails covered more distance faster. Plus, the cone snails’ success of consuming the prey was greatly reduced in the more acidic trials – only 10% captured their prey, compared to 60% of the control snails. So not only do snails in acidic water moved around more (perhaps burning more calories), but they are also worse at catching prey to feed themselves.

Changing ocean water chemistry is having a lot more of an impact on animals that we previously thought. This study on snails is eye opening because it shows us that food web dynamics (eg, who eats what) is going to get a lot more complex in a more acidic ocean. Predators like the cone snail may not be as effective at eating prey, and prey may not be as effective at getting away. That could end up as a net zero effect – predators get dumber, prey get dumber, everyone eats the same amount – but the problem with that is the complexity of an ocean food web. So many different animals are able to eat each other, and so many of those are important for commercial species. I suppose we’ll just have to make like a cone snail and lie in wait to see what happens.

Engage: Do a little research – what animals are necessary to keep your favorite seafood item up and swimming? 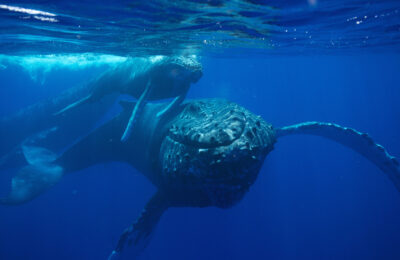