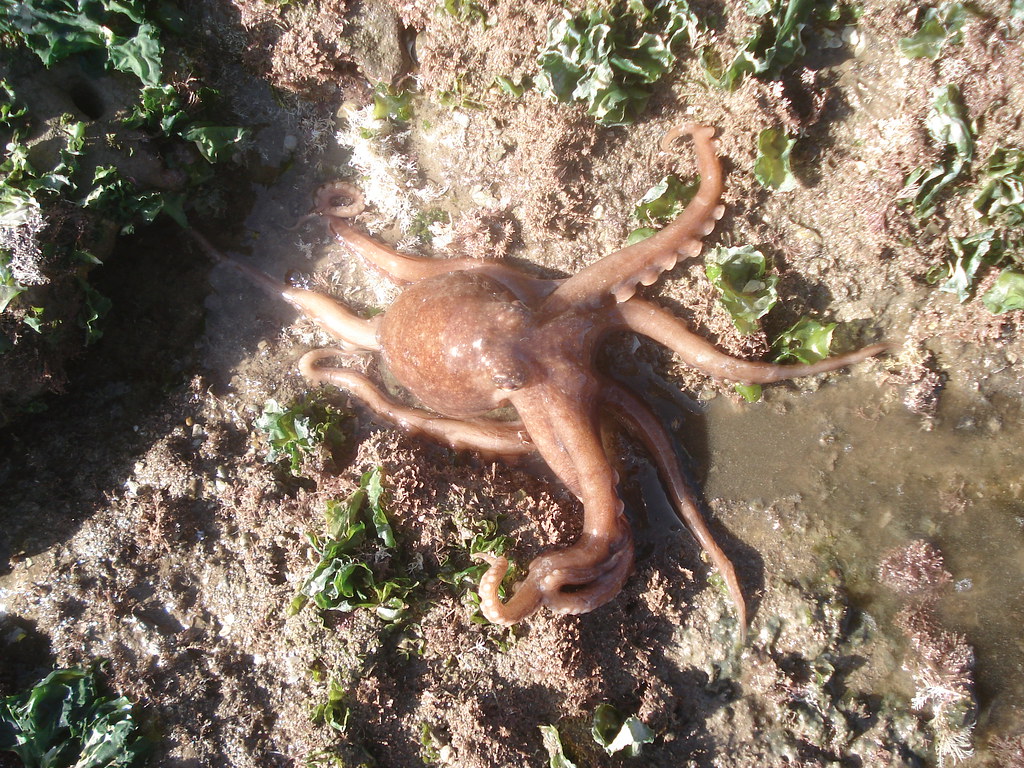 Our oceans abound with a beautiful and awe-inspiring diversity and abundance of life. From the open waters to the rocky coasts, you might ask, how can so many different types of organisms thrive together in a marine community?

This question has captivated the minds of scientists for many decades. Every organism has its niche, or ‘ecological job,’ which relates to what an organism eats and how its diet changes over time. Understanding an organism’s niche is valuable to scientists because what an organism depends on for survival is key to protecting that species. Knowing what an organism eats also provides insight into how energy is transferred throughout the food web. For example, zooplankton, which reside in the water column, and mussels, which sit on solid surfaces, eat tiny phytoplankton algae by filter-feeding. Different species may feed on various types of algae at different stages of life. By feeding on a buffet of resources, these organisms play a vital role in the transfer of energy in marine food webs which makes food webs both productive and strong.

Intertidal habitats represent one of the most productive and diverse marine communities, boasting large numbers of predators and an array of snails, mussels, and clams. In the rocky shores of Argentinean Northern Patagonia, octopuses and sea stars are two such predators. While both octopuses and sea stars are important predators, it’s not clear what resources they are using. Do they eat the same food? Do they compete head to arm for that tasty crab over there? Or do they coexist by feeding on different types of prey?

Storero and colleagues at Centro de Investigación Aplicada y Transferencia Tecnológica en Recursos Marinos Almirante in Argentina set out to understand how the small octopus Octopus tehuelchus, and the sea star Anasterias antarctica, are able to get along in their shared rocky habitat.

The authors used stable isotope analysis (SIA) to identify the main prey and shifts in these species’ diets over time. Most elements have different forms, called isotopes, that can be classified as heavy or light based on the number of neutrons they have. In the marine ecosystem, scientists often focus on carbon and nitrogen stable isotopes. Different groups of primary producers have distinct carbon and nitrogen signatures because they absorb heavy and light isotopes in differing proportions. Predators tend to have carbon signatures that are nearly identical to their food, and the amount of the heavy nitrogen isotope tends to increase as you move up the food chain. By measuring both isotopes in prey and predators, SIA provides a series of ‘fingerprints’ that scientists can then compare to see what an organism is eating.

The researchers collected several young (small) and old (larger) individuals of each species to see how these predators’ niches differed from each other as well as between small and large individuals. They also surveyed potential prey items by collecting common species of filter-feeders (mussels), scavengers (crabs), and grazers (snails) from the intertidal habitat.

After collecting their samples, body tissue from the predators and potential prey species was analyzed for carbon and nitrogen stable isotopes using a stable isotope mass spectrophotometer.

The researchers then put the isotope signatures for each species into a mixing model to estimate the relative importance of the different potential prey items to the diets of the different sizes of octopus and sea stars. They also analyzed the degree of specialization these species had for certain prey types, as well as if these predators’ diets consisted of similar prey.

Octopus and sea stars overall had distinct carbon and nitrogen isotopic signatures, suggesting that these predators fed on different types of prey. The mixing model indicated that both small and large octopuses fed mainly on filter-feeding mussels, while sea stars appeared to undergo changes in diet as they matured. Small sea-stars appeared to eat a lot of filter-feeders, while medium-sized individuals incorporated scavengers into their diets, and large sea stars fed mainly on grazers.

Isotope signatures also indicated that octopuses and small to medium sized sea stars had more flexible diets than the larger, older sea stars. In other words, octopuses and less mature sea stars are opportunistic feeders that will forage on prey as it is available.

These results provide evidence of resource partitioning between octopuses and sea stars; each species has access to a buffet of prey, but they aren’t competing with each other for the same meals. This study offers insight into the importance of the rocky intertidal zone in supporting healthy populations of two top predators that play an important role in the food web.

Storero and colleagues showed, using stable isotope signatures of octopuses and sea stars and their prey, that their populations are fueled by distinct energy pathways. Even when looking at sea stars, a shift in their diet with age showed the importance of multiple prey species in sustaining their populations. It appears as though the availability of many different kinds of prey holds part of the answer as to how octopuses and sea stars both thrive in the intertidal habitat. If healthy populations of these animals are to be maintained in the future, the diversity of prey resources must also be protected.