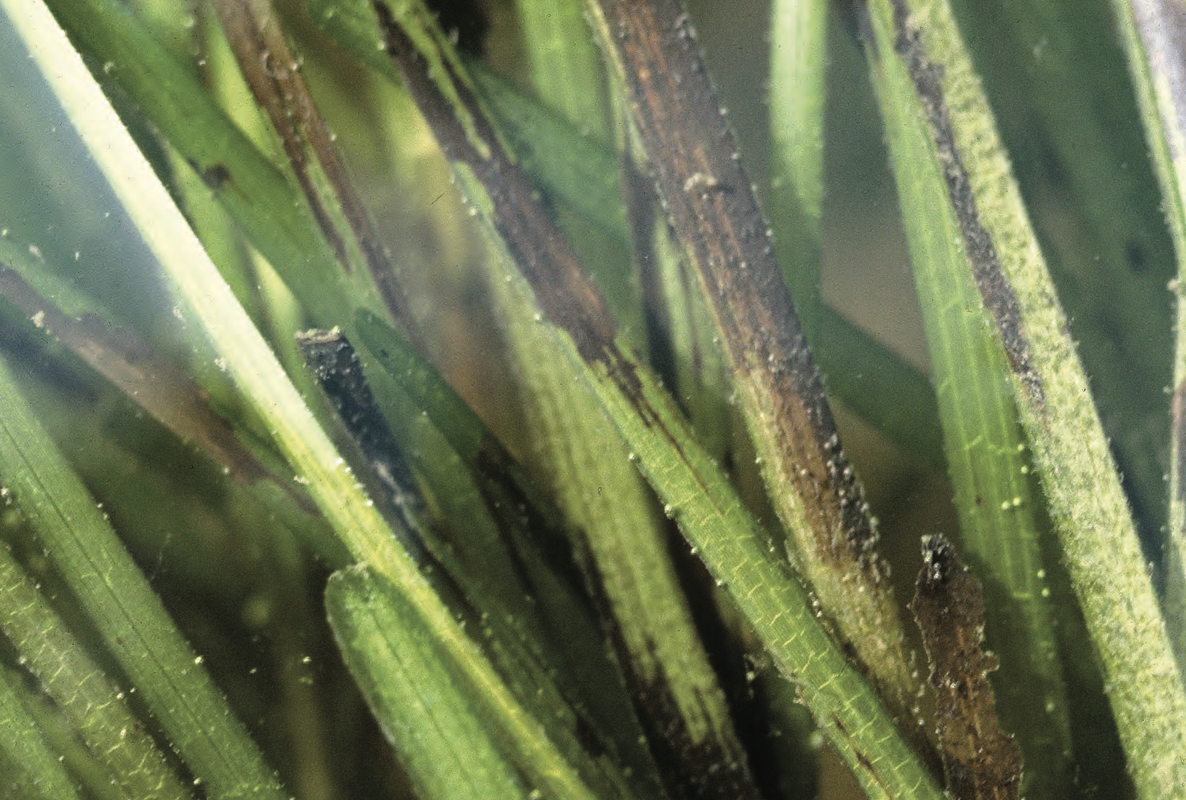 Ever since COVID-19 began, the scientific field of “disease ecology” has evolved in its relevance to the environment, humans, and animals. Disease ecology is also a growing topic of interest for marine research, even more so for organisms that are commercially vital to fisheries and aquaculture (Harvell et al. 2002), as well as for keystone species like seagrasses, which are suffering the consequences of a changing climate due primarily to anthropogenic activity (Bruno et al., 2007; Vega Thurber et al., 2014). Seagrasses, for instance, are critical components of coastal and estuarian biomes, but their proximity to coasts often increases their vulnerability to anthropogenic degradation (e.g. run-off, eutrophication, erosion) (Orth et al. 2006). Seagrass exposure to suboptimal conditions for lengthy periods of time have demonstrated declines in habitat loss and in ecosystem health (Koch et al., 2007; Carr et al., 2012). A decrease in seagrass health and an increase in susceptibility to infection have been hypothesized as the means behind large-scale seagrass die-offs pertaining to “wasting disease” in the past (Muehlstein, 1989; Blakesley et al., 2002). These large-scale die-offs were damaging to local fisheries, keystone species, water birds, and water quality.

The most well-known causative agent of seagrass wasting disease, Labyrunthula spp., is a colonial Stramenophile protist, universal to coastal and marine ecosystems (Raghukumar, 2002; Tsui et al., 2009). Using their ectoplasmic actin-myosin network for attachment and movement, these protists excrete enzymes to break down plant or algal detritus and are thus vital to marine carbon cycling and food webs (Raghukumar, 2002). At other times, Labyrinthula may act as a seagrass pathogen by infecting living seagrass leaf cells, leading to the necrosis of chloroplasts and distinct black lesions (Raghukumar, 2002). The dynamics among seagrass health, anti-microbial defenses and Labyrinthula virulence is still a central topic for wasting disease research.

Labyrinthula was isolated from 1-3 cm sections of seagrass leaves using serum seawater agar media (Trevathan et al., 2011). Leaf tissue that was symptomatic of wasting disease (that is, there were blackened areas surrounded by green tissue) was targeted for isolation, selecting for blackened tissue plus the immediate green border. Labyrinthula growth from the leaf sections was monitored daily using an inverted microscope. Sections of the Labyrinthula cultures were immediately transferred to new agar plates to avoid overgrowth by fungi also originating from the seagrass leaf. To avoid biases in obtaining just one Labyrinthula isolate from a site or leaf segment, separate cultures denoted by letters were created for each separate ‘colony’ of Labyrinthula growing from the seagrass leaves. In total, 38 Labyrinthula isolates were cultured from five seagrass species along the Victoria coastline. 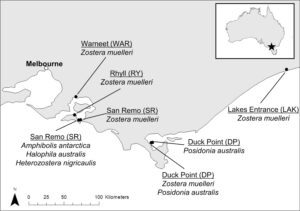 This study is the first to culture, genotype and confirm pathogenicity of Labyrinthula isolates in Australia. Their results showed that three pathogenic isolates were collected from three species in the same area and highlights a potentially important interaction between Labyrinthula and seagrass phylogeny in Australia. There has been no research describing a wasting disease-related die-off in the southern hemisphere since the 1960s, which suggests these die-offs have been over-looked or that the seagrasses have maintained sufficient chemical or life-history defense mechanisms to avoid meadow-wide spread of wasting disease.

The presence of the pathogenic Labyrinthula in Australia provides an opportunity to further investigate unique aspects of wasting disease ecology. Why? Well, first of all, Australia is home to highly diverse and several endemic seagrass species, so they may possess equally diverse chemical, genetic or life-history traits (for instance, spatial heterogeneity of meadow formation) for disease avoidance (Zapata and McMillan, 1979; Irvine et al., 2016; Zidorn, 2016). Additionally, Australian seagrasses inhabit a range of habitat types including protected bays and exposed coastal environments, which could influence the rate of Labyrinthula transference and infection. For example, many estuaries along the coasts are intermittently blocked from tidal flow, i.e. intermittently closed/open lakes and lagoons. Seagrasses in these environments would be subjected to brackish or freshwater conditions, particularly during heavy rains and flooding from the catchment (Mondon et al., 2003). With most Labyrinthula spp. less tolerant to low salinities, these freshwater events could allow for seagrasses to clear their load of Labyrinthula and help control occurrences of disease (Blakesley et al., 2002; McKone and Tanner, 2009). 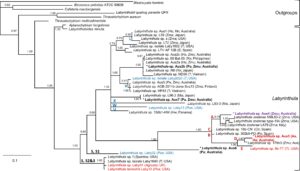 In summary, this study has provided novel data on the pathogenicity and phylogeny of Labyrinthula spp. along the southeastern Australian coast, and likewise the southern hemisphere. Dr. Trevathan-Tackett and team emphasize that more research is needed to understand seagrass wasting disease ecology in the southern hemisphere and in the context of global Labyrinthula biogeography. Their results also highlight the importance of monitoring disease in Australian seagrass populations, especially in areas with anthropogenic and climatic stresses that may promote declines in seagrass health and enhance the risk of wasting disease.