Nearly all life in the modern ocean has evolved under a constant level of water acidity. But human carbon emissions are threatening to dramatically alter the ocean’s acidity, with enormous ramifications for every organism that calls the ocean home.

Meanwhile, many of the most charismatic ocean-dwelling organisms are struggling to adapt to this increase in acidity. Corals, for example, are dying off around the world at unprecedented rates; experts estimate that the world may lose more than half of its coral reefs in coming decades. Important fisheries have been hit hard as well – oyster aquaculture in the Pacific Northwest nearly collapsed after high-acidity waters led to mass die-offs.

But among the numerous studies examining the impacts of ocean acidification on marine life, few have investigated the most abundant type of life in the ocean: microorganisms. Microbes living in the surface of the seafloor are the ocean’s carbon recyclers. By degrading dead fish and phytoplankton, they play a critical role in determining whether the carbon trapped in these dead organisms is buried in the seafloor or returned to the ocean. Buried carbon is harmless, since it cannot return to the ocean or atmosphere to contribute to ocean acidification or climate change. Carbon returned to the ocean by seafloor microbes, on the other hand, can further contribute to ocean acidification. However, it remains unclear whether microorganisms experience the same die-offs and community shifts as scientists observe for fish and coral communities under acidifying conditions.

To investigate this, a team of microbiologists traveled to a unique beach in Papua New Guinea where underground volcanic activity is venting carbon dioxide through shallow waters only about 10 feet deep. Because the vent is a point-source of carbon dioxide, a gradient of high- to low-acidity water forms with distance from the vent – creating a natural laboratory for exploring how increasing acidity affects microbial communities. Following this gradient, the researchers sampled sediments with overlying waters ranging from modern-day ocean acidity, around pH 8.3, to waters with the predicted ocean acidity in the year 2100, around pH 7.8, to extremely acidified waters with pH 6.9. Once all the sediments were collected, the researchers were able to extract the microorganisms from the mud and sand and sequence their DNA to determine what types of microbes were inhabiting each acidity regime.

What they found was a clear distinction between microorganisms living in a modern-day pH environment and those living in highly acidified environments. On average, only about 8% of the bacterial species were shared from one of the acidity gradient to the other.  More important, a pH of 7.8 – the pH expected for the world’s oceans under a business-as-usual carbon emissions scenario – appeared to be the tipping point for microbes. Microorganisms living in water at pH 7.9 were largely the same as those living at pH 8.3, whereas microbes living at pH 7.7 were more similar to the unusual communities living under the extreme acidity waters at pH 6.9.

Interestingly, the DNA sequencing also revealed that microbial diversity was higher under high-acidity (low pH) conditions – that is, the community consisted of many different types of microorganisms, whereas under modern-day acidity the community consisted of a few dominant microbes. The researchers interpret this change in the structure of the community as a response to the stress imposed by high acidity. Essentially, none of the microbial species they identified perform well under acidified conditions, so none of them can thrive. While this added diversity may provide some critical metabolic functions to the stressed community, it remains to be tested whether this stressed community is as effective at recycling carbon as the microbial community present under modern-day ocean acidity.

This study raises more red flags about the potential effects of ocean acidification, especially since microorganisms are responsible for nearly all of the chemical and biological cycles that take place in the ocean. The finding that the water pH predicted for the year 2100 may be a tipping point for microbial communities is particularly critical, since this is an indication that the biology of the ocean may shift beyond recognition within our lifetimes. Most of all, the dramatic effects of ocean acidification on seafloor microbial communities revealed by this study make it clear that ocean acidification will be a challenge for all of the life in the ocean – not just the visible life. 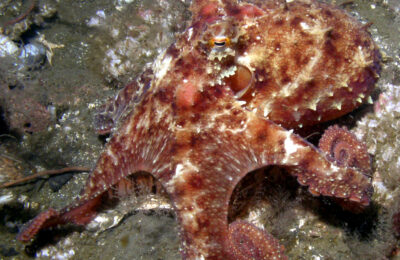