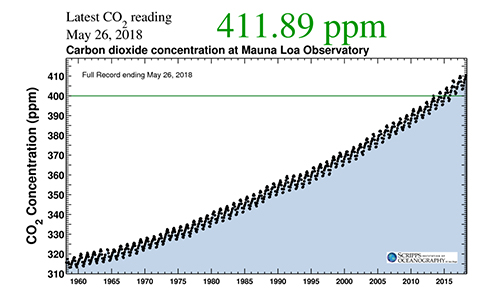 Global climate models predict a decline in ocean net primary production. This is the difference between the amount of carbon dioxide that phytoplankton take in to photosynthesize and the amount that is released by the phytoplankton during metabolism. This process is important because it is the source of half of the oxygen we breathe and the basis for the oceanic biological pump. The biological pump is one mechanism the ocean has for taking in and storing carbon dioxide humans put into the atmosphere (figure 1). It operates as phytoplankton, tiny ocean plants, use sunlight, nutrients and carbon dioxide to photosynthesize converting carbon dioxide into organic matter. As phytoplankton die or are eaten and eventually excreted by zooplankton, they can sink into the deep ocean. Once this carbon containing material reaches the deep ocean it can be stored there for long periods of time.

You may wonder how one region can have more productive waters relative to others. This study focuses on one mechanism that controls productivity called nutrient trapping. Nutrient trapping occurs when the biological pump transports carbon and nutrient containing material downward. As this material decomposes nutrients are released. If the sinking of this material occurs faster than the ocean can physically move the nutrients back up, through a process called advection, the nutrients will be trapped. This means nutrient concentrations will be high at the location of sinking and lower in surrounding waters. In context, higher biological productivity in the Southern Ocean traps the nutrients there and transports less nutrients to northern areas causing decreased productivity in the north.

This study used a model called the Community Earth System Model, that allows for global climate change predictions. In their scenario, they predict carbon dioxide concentrations to increase to 1960 parts per million by year 2250, at which point the carbon dioxide levels would remain stable. This means that they expect humans will continue to emit carbon dioxide for years to come, as current levels are around 410 parts per million and continuously increasing (figure 2).

Results: What Causes the Decline in Ocean Biologic Production?

There are three distinct processes the authors observed in model output as a result of long-term global warming. The first process is nutrient trapping (see above) in the Southern Ocean. Nutrient trapping reduces the amount of nutrients available for northern waters. The second is increased stratification. Increased stratification is the separation, or layering, of water masses due to differing properties like temperature and saltiness. This reduces the exchange of water from one layer to another, meaning it is harder to move nutrients from the deep ocean to the surface where the nutrients would be used in production. The third mechanism is a reduction in the generation of water rich in nutrients in the deep ocean, meaning there is less of a source of nutrient-rich water.

There are many changes within the Earth system that occur leading up to the nutrient trapping. The westerly winds in the Southern Hemisphere become stronger and shift further south towards the pole. Wind helps drive ocean currents and, in this case, the strengthening of the wind pulls more water away from the coast of Antarctica. To counteract the water moving away from the coast, upwelling occurs along the coast where deep water moves upward to replace the water that left. Because this process becomes stronger in the model, areas that currently have water flowing downwards are predicted to shift to becoming areas of upwelling. Upwelling tends to encourage production because it can introduce nutrients to phytoplankton allowing them to grow more readily. In addition to upwelling, the models show surface waters warming by 6 degrees C and the melting of sea ice. Melting sea ice allows phytoplankton to receive 245% more light, providing peak growing conditions for phytoplankton in the Southern Ocean. This enables phytoplankton to grow faster, with a 52% increase in growth rate, which in turn, increases biological production.

Overall, this paper shows a worst-case scenario for climate change. The changes observed in this model the authors posit to be long lasting. They suggest that the lack of surface ocean nutrients observed in the model at year 2300 would not recover and reverse until the climate cooled again and sea ice returned. Sea ice is the tipping point and when once it melts causing a global shift in distribution of nutrients and decline in biological production, it could take thousands of years to return nutrients to the upper ocean and restore normalcy.