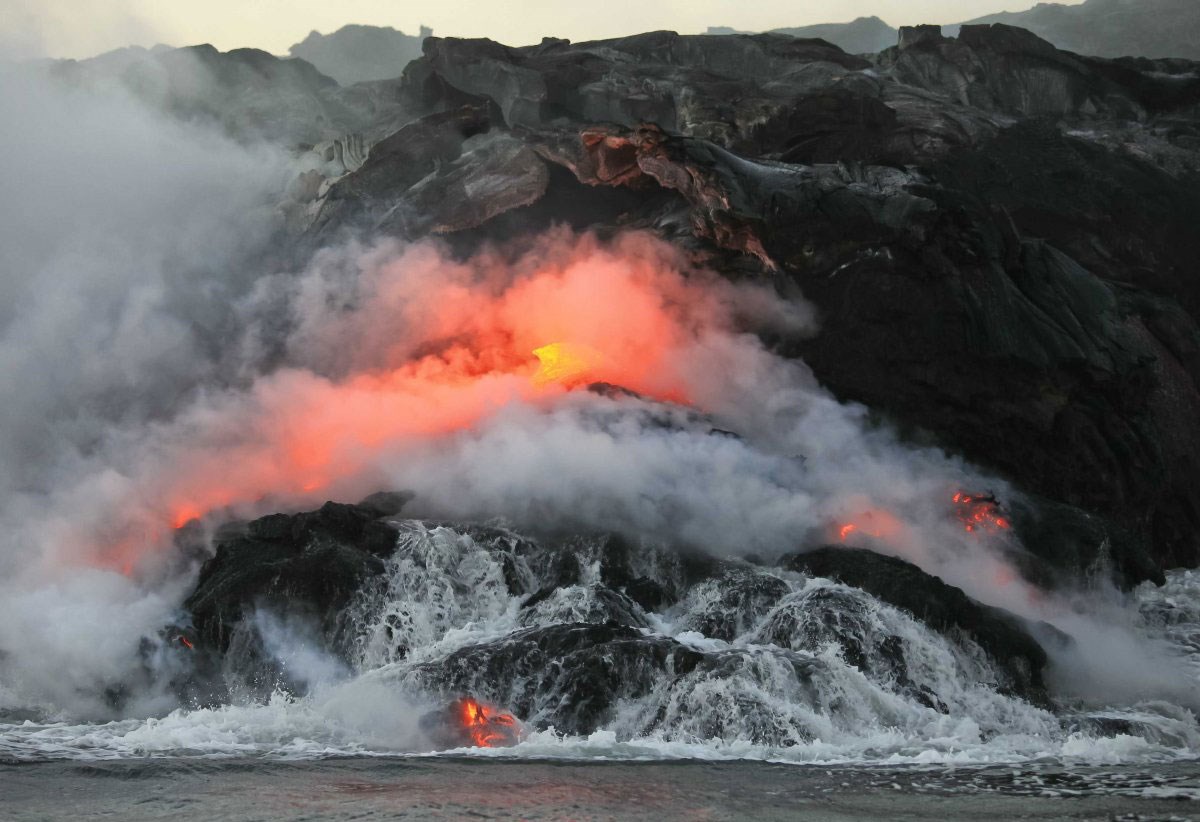 The majority of volcanic eruptions on Earth actually take place underwater. Many well-known islands, including Stromboli, the Azores, and Hawaii (Figure 1), are the result of such eruptions. But before they emerge above the waves, how do volcanoes erupt, given that pressures underwater are much higher than they are on land? An international team of scientists set out for the southwestern Pacific with an underwater robot to investigate.

If you’ve ever gone swimming in the deep end of a pool, you know how quickly water pressure increases under the surface. Even diving down several feet, an uncomfortable ache develops behind your eardrums. At sea level, the total amount of pressure over any surface is equal to 1 atmosphere – a unit of pressure that gets its name because at sea level, a person is experiencing the weight of the atmosphere above them. For every 10 meters (33 feet) you descend in the ocean, there’s an additional 1 atmosphere of pressure placed upon you due to the additional weight of the fluid above. Therefore, at 1000 meters, pressures are 100 times greater than they are at the surface. At the deepest point in the ocean – the Mariana Trench – pressures are more than 1000 times greater than at the surface!

In the canonical view of an underwater volcanic eruption, magma leaks from an undersea volcano as molten lava, forming lava flows that gradually cool upon making contact with the much colder seawater. These non-violent, “passive” eruptions form rocks called pillow basalts (Figure 2). Traditionally, scientists thought that high surrounding water pressures necessitated that undersea volcanoes erupt passively. “Explosive” eruptions – such as those that occur famously on land (Figure 3) – were thought to be mostly impossible.

However, in 2012, an undersea volcano called Havre erupted northeast of New Zealand, at a water depth of 1000 meters. Massive rafts of small pumice particles appeared at the surface of the water, indicating to scientists that an explosive eruption had occurred (Figure 4). In 2015, an international team of researchers visited the site, using an underwater robot to estimate that 100 million cubic meters of volcanic ash had been deposited on the seafloor during the eruption. The team collected samples of this ash for later experimentation.

Not Your Ordinary Baking Soda Volcano

To determine how an explosive eruption had occurred at Havre, the scientists took the ash samples to the Physical Volcanological Laboratory in Germany. Inside a crucible – a cylindrical container made of steel – they brought magma into contact with water under a variety of experimental conditions, and then deformed it to simulate an eruption. Through the experiments, they were able to find a pressure-insensitive mechanism, called an induced fuel-coolant interaction (IFCI), that led to explosive eruptions. Unlike the explosive mechanisms that have been documented above water, this mechanism doesn’t rely on the formation of water vapor between the magma and water (which would be impossible at large water depths and high pressures). Instead, it relies on a sudden expansion of magma surface area, which can occur if the magma cracks suddenly as it cools. Water can then rush into the cracks, causing them to propagate and release explosive shock waves.

The small particles created in the lab from explosive IFCI – the artificial volcanic ash – matched the composition and the size of the ash collected from Havre volcano. This detail confirmed that the IFCI process was responsible for the eruption in 2012.

Knowledge of IFCI is incredibly valuable, because the mechanism demonstrates that volcanoes can (and do) erupt explosively under conditions previously thought to be impossible. IFCI can occur at deep depths in the ocean, and experiments also proved it can occur with a variety of magma compositions. Explosive eruptions may therefore be possible in outer space, where astronomers are on the hunt for Earth-like planets. Furthermore, explosive eruptions are capable of altering underwater heat currents more effectively than passive eruptions, leading the researchers to suggest that explosive undersea volcanoes may have an impact on climate as well. Havre clearly demonstrated that a wealth of incendiary information remains hidden beneath the waves.