On November 8, 2016, Donald J. Trump was elected the next president of the United States of America. Scientists from a variety of fields voiced their surprise and concern at this turn of events in collections of op eds in Scientific American and Nature. They are concerned because, for one, there has been very little attention paid to the role of science in policymaking, or the importance of science and innovation in humanity’s progress, during this brutal presidential campaign. There are few indications of exactly how a Trump administration will approach science funding and science education, or how much science will be involved in the administration’s decision making. Luckily, scientists are used to dealing with a high degree of uncertainty; they’ve already started formulating predictions about how scientific pursuits will fare, and how we can make sure science serves a meaningful role, over the next four years.

The oceans, as you’ve probably heard many times, make up about 70% of Earth’s surface. Yet, discussion of ocean policy made up about 0% of the 2016 presidential race. The oceans are essential in providing protein to a vast number of Earth’s inhabitants, and are becoming an increasingly important food source for Americans – last year alone Americans added almost 1 pound of seafood to their annual diets, even while West Coast fisheries experienced declines due to changing ocean conditions. At the same time, the sea has become a threat to our property and even our lives: the oceans are creeping up onto our coasts due to sea level rise, and the intensity of storms is increasing due to changing climate. In this post, I will outline a few ideas about how America’s new political landscape might affect ocean science and the future health of our oceans based on Trump’s 100-day plan and his transition team appointments.

In a Nature article chronicling scientists’ reactions to Trump’s historic win, Michael Lubell, the director of public affairs for the American Physical Society, stated that “Trump will be the first anti-science president we have ever had.” The scientific community is founded on the process of formulating ideas about how the world works, and then amassing evidence to either prove or disprove those ideas. This is an approach rarely encountered in the world of politics, where arguments are often emotionally charged, and even false claims are powerful if they “feel” true to enough voters.

While we don’t know have a lot of details about his policy plans, Trump has repeatedly made statements that contradict the consensus of the scientific community – most notably, when it comes to climate change. Many scientists from a variety of backgrounds have devoted their lives to understanding and predicting how and why our climate varies, and Trump has repeatedly rejected the evidence they’ve found demonstrating that climate change is a real, present danger. In his campaign’s answers to ScienceDebate.org’s 20 questions, he stated that “there is still much that needs to be investigated in the field of ‘climate change’.” He has repeatedly expressed intentions to pull out of the Paris climate agreement, and experts have balked at his choice of Myron Ebell to spearhead the EPA transition team. They’re concerned because Ebell, an activist who opposes energy-rationing policies and holds no advanced degree in the physical sciences, has dismissed climate change as “silly” in spite of mountains of evidence painstakingly gathered by qualified experts.

If Trump follows through with plans to relax regulations aimed at curbing greenhouse gas emissions and re-open public lands to encourage more coal mining and oil drilling, it could mean a disastrous reversal of the few, paltry steps we’ve made to mitigate the effects of climate change. In a letter to the presidential candidates, prominent ocean advocates and scientists came together to call on the next president to “address the impacts of sea-level rise, ocean acidification, ocean warming…” All three of these are caused by human-induced climate change.

The impacts of climate change on the oceans have been covered many, many times on Oceanbites. Below are a few recent posts showcasing the wide range of effects continued greenhouse gas emissions are having, or will soon have, on our oceans:

Along with the detrimental effects of unabated climate change, there are many other ways that changing US environmental policy could affect our oceans. Changing chemical pollution regulation and changing fishery regulation could have dramatic impacts, but we don’t know a lot about what to expect on these fronts as of yet. If the EPA is subject to dramatic funding cuts, it could lead to weakening regulation on the use and release of toxic chemicals. These chemicals have serious consequences for the health of ocean creatures including phytoplankton, salmon, and even beluga whales, and also threaten human health, especially for those who subsist on seafood. However, many states have previously stepped up to create their own chemical regulations in response to weak federal legislation.

America’s Got Talent… For Now

Understanding how policy will affect science also requires an understanding of how policy will affect scientists. Some foreign researchers are considering leaving the country amidst concerns about funding cutbacks and changing immigration policies. Many scientists are voicing concerns that these factors could also dissuade talented international students and researchers from coming to the US for training and collaborative research opportunities.

The oceans are subject to the whims of national policy, and yet they know no borders – what we do in the US affects the global ocean – being poor stewards can cause food scarcity, public health disasters, and loss of fishermen’s livelihoods all over the world, as well as deeply affecting the smidgeon of blue we can see from our shores. To really understand the ocean, marine scientists have to collaborate with scientists all over the world to get a better picture of our global oceans. Collaboration with researchers from many different disciplines and backgrounds is a cornerstone of science, especially when it comes to oceanography. We depend on international cooperation to put together teams for far-flung expeditions and deep-sea exploration, as these types of ventures require vast resources and broad networks of talented scientists.  How changing US policy will affect international research relationships remains to be seen, but we do know that many valuable collaborations stem from relationships built while scientists from other countries visit the US.

The Era of the Outreach Scientist

As scientists – and especially as outreach scientists who believe communication is an integral part of their jobs – we have a monumental task ahead of us. We’ve just been shown that our efforts to explain our work haven’t reached a large portion of the population, and for that reason we’re headed, at an ever-accelerating pace, towards a future in which economic, public health, and environmental disasters due to climate change are nearly certain. Now, more than ever, we need to become skilled communicators as well as scientists. We need to listen to people from all walks of life and show them how science is deeply connected to what matters most to them. To quote Dan Rather,

“The political press treats science as a niche issue. But I would argue that it is central to America’s military and economic might, that it shapes the health and welfare of our citizenry, and that our governmental support of the pure pursuit of knowledge through basic research is one of the defining symbols of American excellence.”

If we choose to be optimistic, we could imagine some ways a Trump administration could lead to a healthier planet. For example, Trump stated in his answers to ScienceDebate.org’s 20 questions that he wants to create new jobs and make the US less dependent on fossil fuels. With these goals in mind, it’s possible his administration could be pushed to pursue clean energy projects that will also lead to reductions in greenhouse gas emissions. What better way to bring on the era of the outreach scientist than to make it our objective to convince Trump, and the millions of Americans who don’t believe there’s a scientific consensus on climate change, that measures to mitigate and prepare for its effects are in their best interest, from an economic and national security standpoint? Our charge, then, is to convince the American people, and the politicians we’ve chosen to lead us, of these facts. Let’s get to work.

I welcome your ideas about how we can become better outreach scientists, as well as any other thoughts on how our oceans’ futures may be affected by changing US policy, in the comments. Any opinions expressed here are my own and don’t reflect the views of the larger oceanbites community. 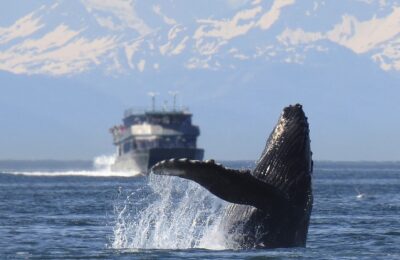