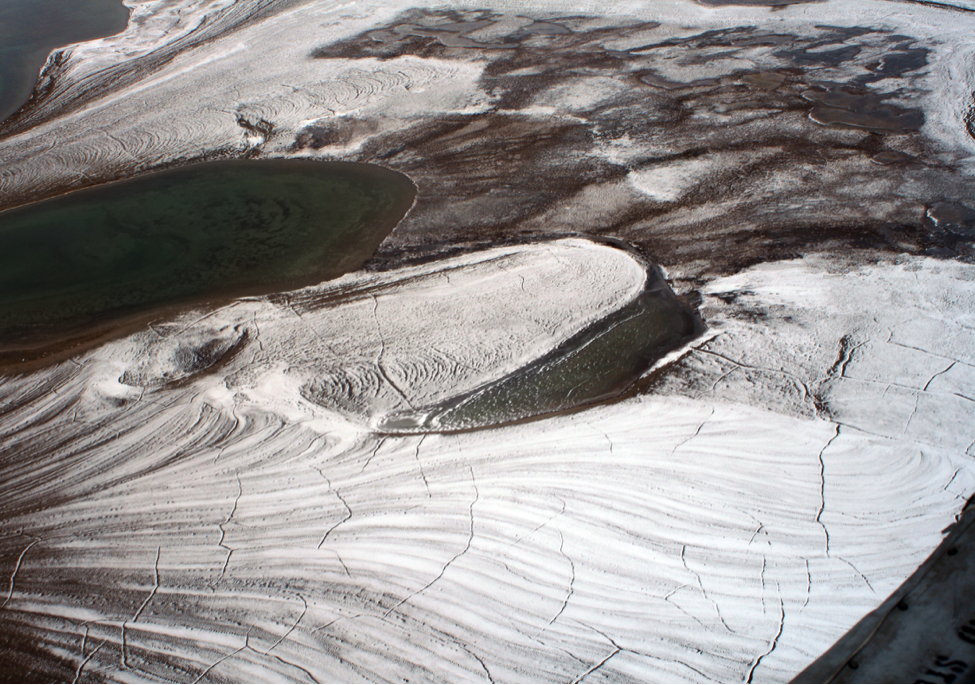 As we race to prepare for a climate threatened by our fossil fuel-burning habits, the Arctic, steps ahead of the rest of the planet in the march towards a warmer world, has been transforming. Warming at a rate nearly twice that of the global average, the northern polar region is particularly sensitive to rising temperatures. The sensitivity is in part caused by melting sea ice, which decreases surface reflectivity causing the region to absorb more heat and warm further. Few biological and chemical processes there will be left untouched, and the Arctic carbon cycle is no exception.

The Arctic has long been considered to be a region that removes carbon dioxide (CO2) from the atmosphere (referred to as a CO2 “sink”) because CO2 dissolves more readily in its cold waters. But warming-related changes happening to its ecosystem may impact the strength of its sink. Understanding how the Arctic carbon cycle is changing and what its implications are for the global carbon cycle is an area of ongoing research, made difficult by the challenge of directly measuring land-air carbon exchange at such high latitudes. But through analyzing atmospheric CO2 measurements made at Pt. Barrow, Alaska, terrestrial scientist Su-Kong Jeong of Seoul National University and his collaborators make several advances in our understanding of the changing carbon cycle in the Arctic.

First, Jeong and his colleagues find in the measurements that the seasonal swings in local atmospheric CO2 are becoming more severe. There is a natural pattern to atmospheric CO2 levels that follow the seasons: in the summer, flourishing plants draw down CO2 as they photosynthesize, leading to lower atmospheric CO2 concentrations than in the winter, when plants are dormant. You can see this process in the sawtooth pattern of atmospheric CO2 measurements, with the rise and falls corresponding to winter and summer months (Figure 1). Jeong and the scientists show that the seasonal CO2 amplitude (the annual max – min CO2 anomaly, where anomaly indicates a deviation from the average concentration) has been increasing at a rate of 4 ppm/yr.

In the Arctic, the seasonal pattern is created by two processes: summertime plant growth, and respiration by microbes in the soil during the early winter. Respiration is a process in which organic matter (including dead plants and animals) is broken down into carbon dioxide, water, and energy for the microbes. After the region passes its summertime peak plant growth period but before the ground has frozen, microbes in the soil have a large impact on local CO2 cycling. They break down organic matter (whether from decaying plants or larger organisms), respiring CO2 in the process. While previous studies have attributed rising seasonal CO2 swings to increased plant growth enabled by increased thawing of permafrost (frozen soil) (Figure 2) from the warmth, Jeong and his colleagues’ results show that rising respiration in the early cold season is the cause. The involvement of early cold season respiration suggests that carbon fluxes other than those driven by plants could be increasingly important in the Arctic carbon cycle.

How long carbon stays in the Arctic

Next, putting the atmospheric measurements through a model, the scientists find a 99% probability that the amount of time carbon spends in the Arctic system is decreasing. This measurement, known as residence or turnover time, of a compound refers to how long that molecule stays in a system before exiting. The residence time of carbon in the Arctic ecosystem mostly depends on how much and how quickly plant photosynthesis and microbial respiration are occurring. The scientists’ finding that the residence time of carbon in the arctic over the 2004-2013 period is 13.4% lower than it was during the 1979-1988 period suggests that the Arctic’s tundra (defined by the inhibition of tree growth by frozen ground) biome is transitioning to a more boreal (host to a variety of conifers, including pines, spruces and larches) landscape (Figure 3), which has a characteristically shorter residence time.

The scientists speculate that the reason for the shortening residence time has to do with the increasingly melted permafrost. When carbon is locked into permafrost through dead plants and other organic matter, essentially none of it is released while the ground remains frozen. However, as soon as the ground thaws, that carbon is now free to be broken down and released as CO2 by previously dormant microbes in the soil. Now the carbon once sequestered in the permafrost is free to cycle out of the system, dramatically shortening the residence time of the carbon that the permafrost had contained. A shorter residence time means that the Arctic will respond more quickly to changes in atmospheric CO2 and temperature, and as a result have a larger influence on global CO2 concentrations.

Impact of temperature on CO2 release

Finally, their most tenuous finding (but also most compelling for understanding Arctic climate change) is that there is a 54% chance that respiration occurring in soil is more sensitive to temperature changes than is the overall uptake of carbon in the Arctic region. This matters because it tells us that as temperatures rise, CO2 release from the soil will increase more than will the amount of carbon the region sequesters through photosynthesis and other processes. This speculation about the temperature sensitivity of microbial respiration suggests that it could become an increasingly important process in the arctic carbon cycle as the region continues to warm.

Jeong and his collaborators emphasize the importance of microbial respiration in the Arctic carbon cycle in their paper. They speculate that it is this process that is responsible for the heightened seasonal CO2 amplitude as well as for the decreased CO2 residence time. If their last finding that respiration is more sensitive to temperature than CO2 uptake is true, then it supports the idea that there is a positive feedback loop occurring: the arctic warms from rising CO2, releasing more CO2, causing further warming, triggering the region to again release more CO2.

Many questions remain regarding the future of the Arctic carbon cycle, including the effects of soil moisture, precipitation, accumulating biomass from the increasing plant life, and more. But Jeong and his colleague’s paper brings attention to the importance of microbial respiration in the arctic carbon cycle, strengthening models and speculations about what the carbon cycle and further the state of the artic ecosystem, might look like in the future.