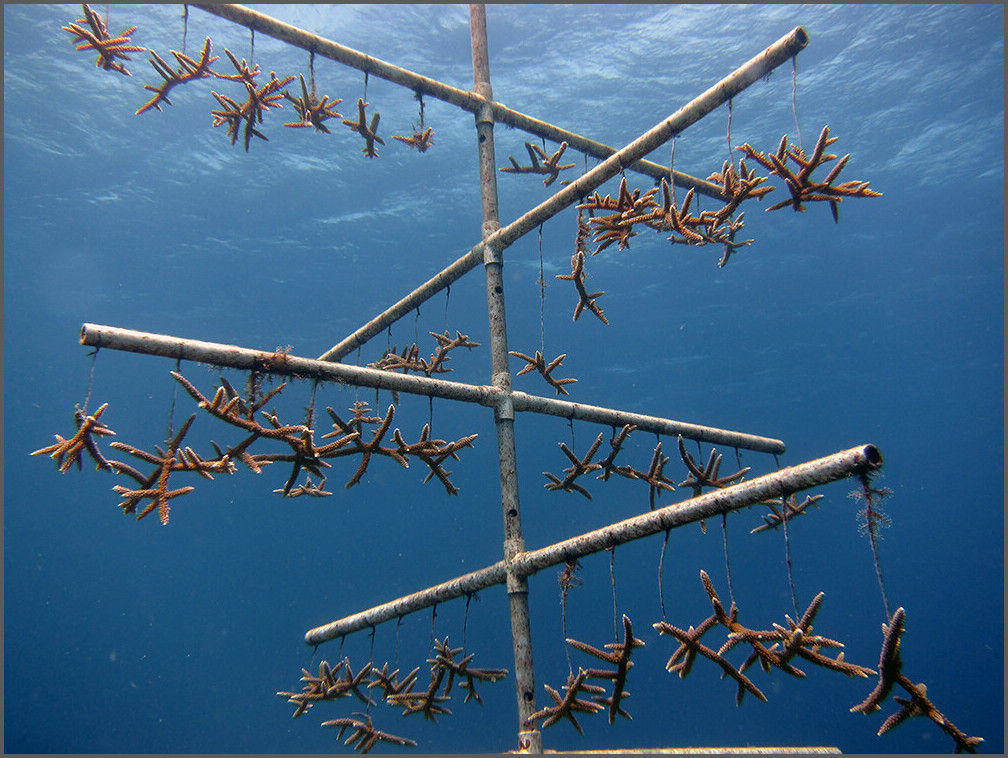 Despite the devastating effects of climate change on coral reefs, some corals are surviving on this warming planet. Identifying these heat-tolerant corals is important for coral reef restoration programs and to better understand the future of coral reefs. However, it is nearly impossible to identify heat-tolerant corals in a healthy ecosystem. And that is what makes a new study published in the Proceedings of the Royal Society so important. With a new method to study heat stress in corals, scientists identified heat-tolerant corals located in offshore nurseries. Their methods inform coral restoration programs around the world and give us some hope the coral reefs will survive on a warming planet.

Until recently, staghorn corals (Acropora cervicornis) were the most abundant corals in the Caribbean Sea. Their irregular elk-like branches and dense clusters provided the ideal habitat for many marine organisms and protected the shoreline from waves and storms. Along with elkhorn coral and star corals, staghorn corals built Caribbean coral reefs over 5,000 years ago.

Today less than 3% of the staghorn coral population remains in the Caribbean Sea. Starting in the early 1980s, white band disease, a disease that destroys the coral’s tissues, along with climate change decimated staghorn populations. And as global average temperatures continue to rise due to man-made climate change, staghorn coral populations are expected to continue to decrease. When sea surface temperatures rise, corals expel their symbiotic algae from their tissues in an event called coral bleaching. Since symbiotic algae provide corals with the majority of the animal’s food, corals that cannot regain their symbiotic algae die of starvation. Due to disease and coral bleaching, staghorn corals are listed as Critically Endangered in the IUCN’s Red List and as Threatened according to the Endangered Species Act.

The coast of Florida is home to the largest coral restoration program. Here, fragments of staghorn corals and other coral species are raised in offshore nurseries. Once corals are large enough, they are outplanted to nearby reefs. In 2009, scientists witnessed the first spawning event by an outplanted staghorn coral nursery, which means that these restored reefs are thriving. Despite these successes, it is still unclear how climate change will affect these newly established reefs. Measuring the heat tolerance of these corals is key to better understand the future of these reefs.

Luckily, scientists now have tools to identify heat-tolerant corals. Coral Bleaching Automated Stress Systems are portable tanks where scientists can expose corals to changing ocean temperatures. Using these devices, scientists recently surveyed the thermal tolerance of 229 colonies of corals across 6 coral nurseries located in Florida. Corals were exposed to 8 different temperatures for 7 hours and measured the heat tolerance of each colony. Overall, corals from each nursery showed strong thermal tolerance meaning that individuals from each colony could potentially survive coral bleaching events.

Although coral reefs cover only 1% of the ocean floor, they contain about 25% of all marine biodiversity. Each year coral reefs provide $375 billion in ecosystem services such as coastal protection, food security, jobs, and medical innovations. Therefore, the loss of coral reefs threatens people’s livelihoods around the world. On a warming planet, it is crucial to identify, protect and propagate heat-tolerant corals that can sustain future generations.