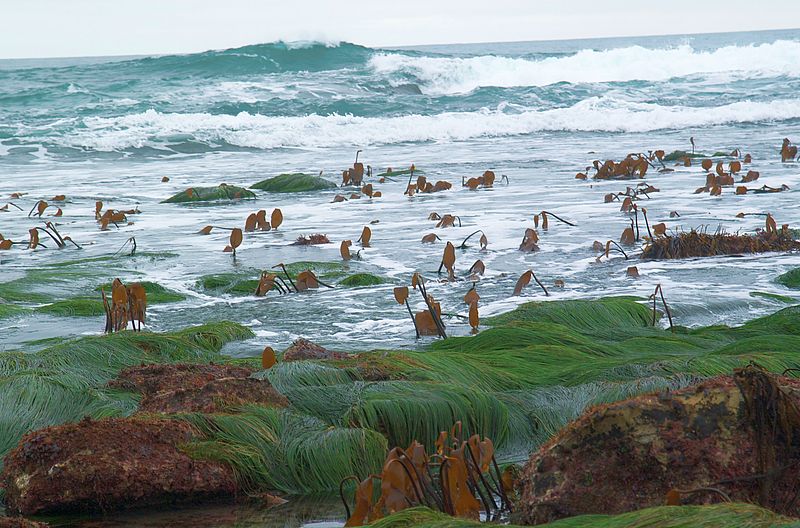 In the plant world, competition between species is almost always over space. Space dictates how much sunlight, nutrients, and potential mates you have access to. In community ecology, it’s thought that ecosystems only have so much space to offer different species, with some ecosystems containing more space than others. Most systems are also thought to be saturated so that, most of the time, they contain the maximum number of species they can. This means that any addition to that community, like a newly invading species, must be met with an equal removal of a native member of that group. In these situations, the species moving in is usually described as invasive. This saturated-community idea has huge implications for invasion ecology and is why invasive species are thought to reduce biodiversity in new environments. It’s also why invasive species are so common in disturbed areas, where space has recently become available for colonization.

In coastal environments, where biological communities change all the time and transfer of aliens from foreign environments is common, invasive species are increasingly abundant. As a result, the monitoring and management of these species has become increasingly important to countries with extensive coastlines.  Wakame, an Asian kelp (or macroalgae), has become widespread throughout the Atlantic and Pacific Oceans. Despite its distribution though, its interactions with native species are not well understood. Large kelp species are important components of coastal environments. Fast growing photosynthesizers, they produce large amounts of energy for the whole ecosystem. They also control the abundance and distribution of other intertidal species, much like the canopy species in a terrestrial forest. Scientists know that macroalgae are prone to travelling long distances, as both the spores (seeds) and individual plants can be transported by currents to far away shores, but it’s not well known how they interact with the communities they land in. De Leij et. al. studied Wakame in a recently invaded coastline, the Plymouth Sound, UK, to assess its invasion potential.

To effectively establish themselves in a foreign community, invasive plants have to find adequate space to grow, ward off competitors and predators, and produce a large number of healthy offspring, who in-turn must meet these requirements for their own generation. If a community is saturated with lots of native species, it may be harder for an invader to meet these requirements. The De Leij team test the hypothesis that intact native communities with little open space are resistant to colonization by Wakame by comparing the kelps’ success in sparsely vs densely populated native macroalgae communities.

They first conducted a broad field survey of the Plymouth Sound to compare the success of adult Wakame kelp in different types of native kelp communities. Some kelp forests are dominated by Laminaria, an important habitat-forming species that grows fronds many feet tall, while others are dominated by shorter mixed macroalgae. It’s important to know which types of kelp forests are most likely to be invaded by Wakame. They then conducted two fine scale surveys of individual communities to investigate the behaviour of different Wakame individuals. Not all individuals of a species are built the same, and invaders that survive through a generation likely do so because they found favourable conditions in the community they landed in. Knowing what conditions promote survival of Wakame individuals is important for managing them. Lastly, they conducted a canopy-removal experiment to examine the differences in Wakame vs native macroalgae colonization between freshly disturbed sites and intact native communities. It’s kind of like burning the forest and seeing what grows back.

Through their broad scan of Sound, De Leij discovered that Wakame abundance was generally lower in communities with dense assemblages of native macroalgae, especially among Laminaria-dense communities. This suggests that dense native communities may be resistant to take-over by Wakame, likely due to the limited light available beneath the native canopies. However, through their detailed surveys, they found that the health of individual Wakame was not  affected by the abundance of native species. So dense shaded bottoms of native kelp forests are less likely to see Wakame establish, but those that do end up with a couple Wakame end up with healthy Wakame. This could mean that dense, apparently healthy, native communities could still harbour breeding grounds for the alien. They also found significant differences in macro algae colonization in the cleared vs intact communities, where Wakame took up 3 times more space and produced 5 times more individuals in the cleared sites compared with Wakame that had entered the uncleared sites.  So Wakame seems to thrive in empty communities and, at least, can successfully enter communities seemingly full with native species.

De Leijs’ results suggest that resistance to Wakame establishment depends very much on the site, particularly by how much dense native canopy already exists in a community. However, even resistant communities cannot fully exclude Wakame establishment, as the foreign kelp can still enter and produce healthy adults in those sites. They couldn’t determine whether the presence of Wakame prevents the re-establishment of native species, as their study only looked at a few months of macro algae regenerate. Long-term monitoring of cleared and intact patches is required to determine whether Wakame colonization results in lowered native biodiversity over longer time scales. However, if it turns out that Wakame does negatively and permanently affect native macroalgae, De Leijs’ study provides good advice for controlling Wakame spread. Considering that Wakame only becomes a significant component of the communities during clearing events, controlling the invader could be accomplished by protecting those dense stands of native species, particularly the Laminaria. Large diverse communities are the best bet against invasion by alien species.

On a theoretical level, De Leijs’ results beg the question, just how saturated are our native ecosystems? And, as community ecology suggests, is saturation a good measure of ecosystem health? Invasion ecology is a fascinating discipline and one that will be increasingly important as the world sees more and more changes in global climate and other factors that promote the spread of species into new environments.