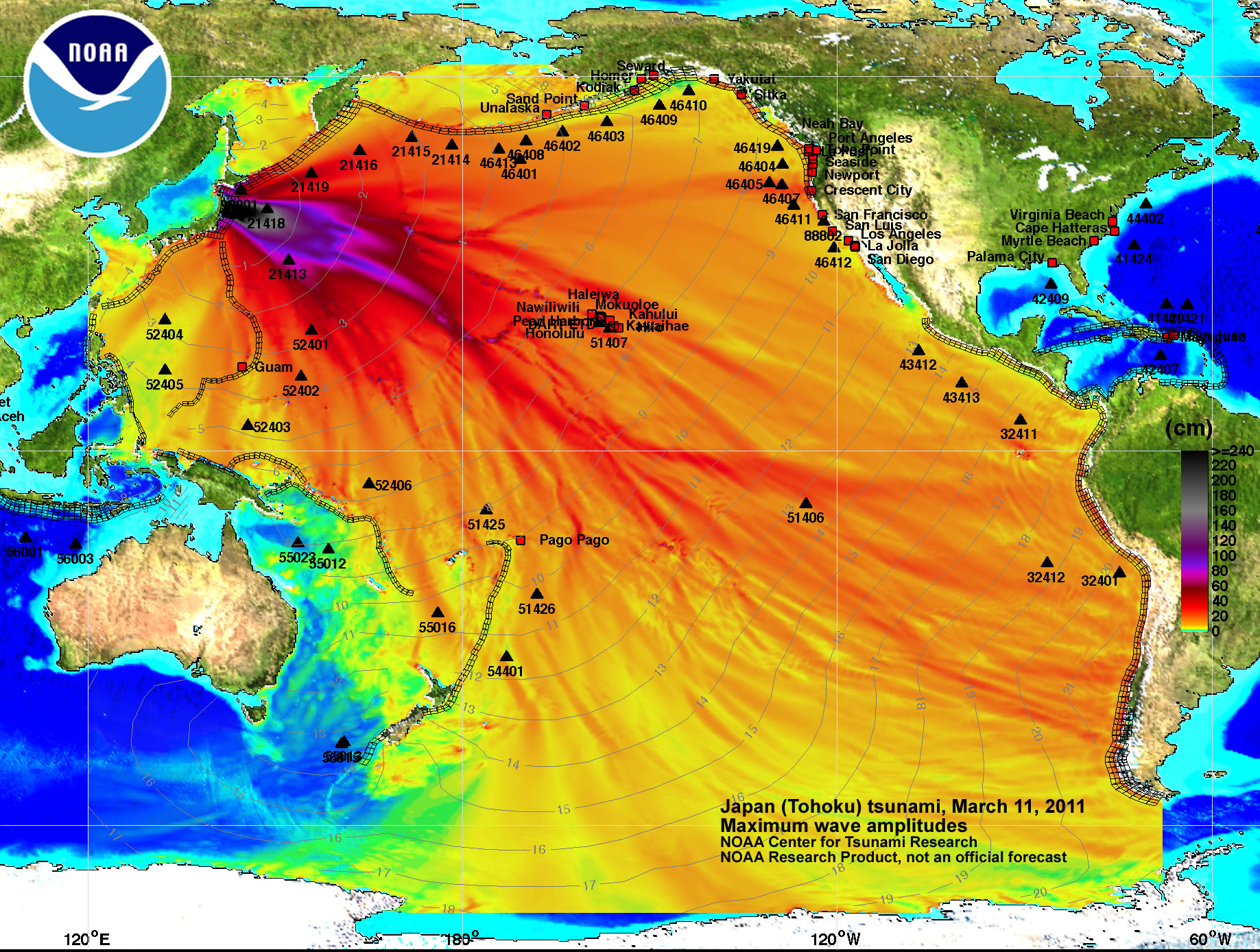 Most of us remember the catastrophic 2011 earthquake and tsunami that struck Japan. The earthquake was a magnitude (M)9.0–9.1 undersea “megathrust” earthquake off the coast of Japan, with an epicenter approximately 70 kilometers east of the Oshika Peninsula of Tohoku. Megathrust earthquakes are massive quakes that occur at subduction zones, areas where one of Earth’s tectonic plates (moving parts of the crust) is forced beneath another and down into Earth’s mantle (Fig. 1). These interplate earthquakes are the planet’s most powerful. Since 1900, all earthquakes of M9.0 or greater have been megathrust earthquakes. The one in 2011 actually moved Honshu, the main island of Japan, 2.4 meters (m) east and shifted the Earth on its axis between 10 cm and 25 cm.

Even more destructive than the 2011 earthquake itself, however, was the massive tsunami wave that followed. Because megathrust earthquakes deform the ocean floor, they often generate a tsunami. The 2011 wave reached heights up to 40 m above sea level as it traveled 10 kilometers (km) inland. Tsunamis are particularly destructive when they’re generated by earthquakes that occur near the coast they devastate. In this case, they travel only a short distance, striking with massive force and limiting preparation time for residents.

Thankfully, tsunami warning systems are in place all over the world. But in order to improve our ability to predict and prepare for these waves, researchers continue to search for ways to better understand their origins, and why certain types of earthquakes may lead to particularly devastating tsunamis.

The earthquake that caused the 2011 tsunami is a starting point for this research. In that earthquake, over 50 m of tectonic plate slip occurred at the subduction zone. Movement, or “slip,” on the shallow-angled portion of subduction zone plate boundary faults (areas where the Earth’s crust is fractured, most commonly where two or more tectonic plates meet) can trigger very large tsunamis. This can occur when energy from large inter-plate earthquakes propagates to the trench (where one plate subducts beneath the other) or during “tsunamigenic” earthquakes, a special class of earthquakes that produce larger tsunamis than expected for their magnitude. These events primarily occur at subduction zones with thin layer of subducting sediment and highly faulted oceanic crust.

The Tohoku earthquake area additionally shows what may be another important feature that can be associated with tsunamigenic slip: a landward-dipping, normal-fault branching from the main megathrust-fault. Here is a video of how a normal-fault can generate a tsunami: “Tsunamis-Normal fault”. Shallow slip in tsunamigenic earthquakes is rare but very destructive, making it all the more important to extract data on structures associated with these events and apply it to our knowledge of the global subduction zone system.

Bécel and colleagues have identified another similar area: a segment of the Alaska–Aleutian margin called the Shumagin Gap (Fig. 2) that may have similar properties as the Tohoku region. Some researchers suggest that instead of rupturing in one large earthquake, most of the seismic energy in the Shumagin Gap is released through steady creep (releasing energy in small bursts). However, an earthquake in 1788 is thought to have ruptured and released energy laterally through the Shumagin Gap from the neighboring Semidi segment, and historical records suggest that the earthquake generated a large tsunami. Additionally, the area has historically produced large tsunamigenic earthquakes, including the M8.6 1957 earthquake that propagated laterally through a portion of the megathrust offshore Unalaska Island, causing an unusually large (23 m) tsunami, and the M8.6 earthquake in 1946 that ruptured the segment offshore Unimak Island (Fig. 2). These and other events highlight the importance of considering potentially tsunamigenic structural configurations in segments thought to be creeping or with no record of historical megathrust earthquakes.

The significance of unique segments like these was not appreciated until the 2011 event. The importance of recognizing the hazard posed by the Shumagin Gap was emphasized by a recent tsunami scenario for the Alaska subduction zone showing that a large tsunami in this segment could have devastating consequences to coastal communities locally in Alaska and around the Pacific Ocean.

Research on these subduction zone segments can be hard to conduct because their tectonic faults extend to great depths in the Earth. To study this section and others of the Aleutian Peninsula, the researchers used multichannel seismic (MCS) reflection, wide-angle reflection/refraction, and bathymetric data by towing a seismic airgun array behind a research vessel. Essentially, these methods work like sonar, emitting sounds at certain frequencies that can penetrate sediment and even bedrock to see what is happening beneath the sea floor. The researchers studied the mechanics of the fault system including the angle of plate dip, the coupling of plates (how strongly or weakly they interact or are locked with each other), the thickness of sediment, and investigated past activity of the faults.

The data showed signs that the Shumagin Gap could be prone to generating both transoceanic and local tsunamis, which would also explain past events generated by this presumed creeping segment. They saw a large, active normal-fault that may either slip coseismically, allowing displacement over a large area seaward of the fault, or be triggered by shallow earthquake rupture propagation, as determined for the Tohoku earthquake, and thus could either promote or result from shallow slip. In short, the results were favorable to tsunamigenesis.

The results may also provide a recipe for tsunamigenesis accompanying earthquakes in the Shumagin Gap that researchers may look for elsewhere across the globe. Characteristics include thin subducting sediment, shallow angle dip, and a deeply-rooted active normal-fault within the overriding plate that may generate tsunamis because large slip on the shallow plate interface would force sudden movement (extension) in the overriding plate. If the normal-fault system is activated by a large earthquake, it could trigger shallow slip and uplift of the seafloor leading to the release of seismic energy over a large area.

There is still much that is not clear about the mechanics of the coupling of such normal-faults with megathrust-faults created by subduction zones. But this study demonstrates that normal- faults like one involved in the Tohoku tsunami are present in other subduction zones, and that such faults may be under-recognized globally. It also suggests that creeping regions might have greater tsunami potential than previously recognized. Identifying and characterizing the shallow megathrust configuration is therefore essential to our comprehensive understanding of tsunami hazards related to the global subduction system.