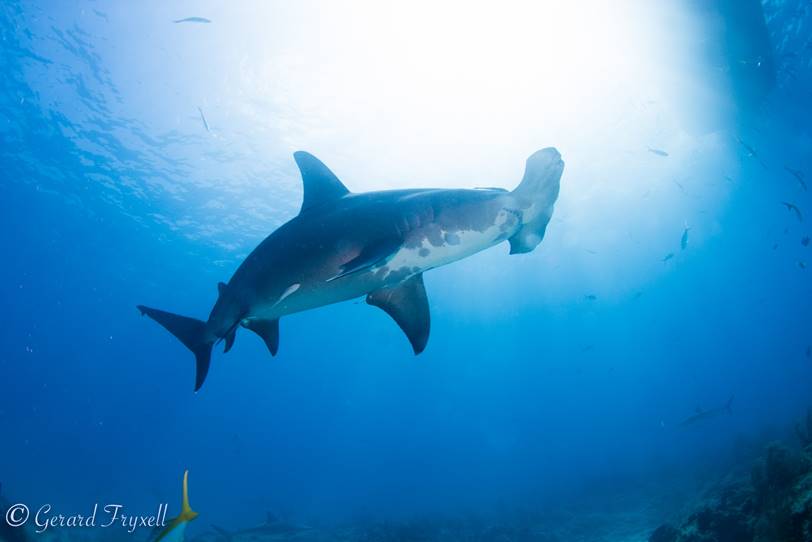 The great hammerhead (Sphyrna mokarran) is the largest of the ten hammerhead shark species (known to date) worldwide, and given its name perhaps the greatest of all time (G.O.A.T.) of hammerhead sharks. I say known to date because new species discovery is constantly changing our understanding, as a new hammerhead species was characterized just recently in 2013 known as the Carolina hammerhead (Sphyrna gilberti sp.) (Discussed in Quattro et al. 2013). The great hammerhead in particular is highly mobile, known through past studies to spend time in coastal and open ocean environments. Because of this roaming behavior, this species likely comes in contact and therefore plays a role as a high level predator in multiple ecosystems. From multiple shark research programs, it is known that in the western Atlantic great hammerheads are known to use habitats in both Florida and the Bahamas, potentially playing an important role internationally. Unfortunately, great hammerhead populations, like many sharks, are thought to be declining quickly due to direct over-fishing as well as incidental bycatch. Indeed, this species is listed as endangered on the International Union for the Conservation of Nature (IUCN) Red List. Additionally, great hammerheads are listed by the Convention on International Trade in Endangered Species (CITES) Appendix II and in the Convention on the Conservation of Migratory Species of Wild Animals (CMS) Appendix II. These agencies help regulate sustainable trade of these animals internationally.

One of the fastest growing areas of shark research involves the tracking of shark movement, where species from the great white shark (Carcharodon carcharias) all the way to the small Port Jackson shark (Heterodontus portusjacksoni) have shown different distances and styles of movements. This area of study is called philopatry; a term that describes the geospatial preferences of an animal. More simply put, where does an animal spend its time? Philopatry includes residential behavior, where a shark stays in a certain area for an amount of time. It also includes movement types like return migrations, where just like it sounds, an animal may reside in an area, leave, and return at a later date. Understanding where a shark moves and for what purpose can help create areas of importance for parts of their life cycle, for example reproduction. Like other sharks, great hammerheads are considered “k-selected”, meaning they have relatively small amounts of young and long gestation times, so that one female does not produce many offspring over the course of her life. Therefore, being able to understand movement in relation to possible reproductive activities (ex. giving birth) is key information.

Guttridge et al. 2017 was a collaborative project between many Bahamian and U.S. research groups that interact with great hammerheads within their research programs. Many different methods were used and then combined to answer the short yet complex question: where do great hammerhead sharks go? First, the authors used various tagging methods such as convention dart tags (simple tags that require a shark being recaptured at a later date), as well as more technologically advanced tags like acoustic and satellite tags. Briefly, acoustic tags are either externally or internally implanted and communicate with a receiver, where when a tagged shark swims near a fixed location receiver, data like date and time are recorded. Fortunately, acoustic telemetry studies are becoming increasing common among various marine animal research, creating a wide network of these receivers in the U.S. and Bahamian waters (Figure 1). Additionally, pop-up satellite archival tags were deployed on other sharks. These tags collect data such as location and depth over a set period of time, then pop off and relay the data to a satellite. These tags can help fill in movement gaps for areas like the open ocean where acoustic receivers are lacking.

In addition to tagging, photo identification was used to catalog certain individuals. In recent years, the west side of the island of Bimini in the Bahamas has become a consistent hot bed of great hammerheads in the winter months. These sharks are found close to shore in clear water where divers can actually photograph the animals easily. These images can then be assessed for various key identification markings. For example, the authors used traits like notches in the dorsal fin (Figure 2A), fin damage (Figure 2B), disfigured fins (Figure 2C), spot patterns on the belly (Figure 2D), and pigmentation differences (Figure 2E) to identify an individual shark.

From the combination of these various data sets, Guttridge et al. 2017 was able to determine there is connectivity between hammerheads in the U.S. and in the Bahamas, meaning shark move internationally between these areas. Some sharks tagged in both the Bahamas and Florida migrated as far north as Virginia. Others made migrations between Florida and the Bahamian Islands of Andros, Bimini, and Grand Bahama. These patterns were typically seen in the winter, indicating the cause could be related to reproduction and less likely other factors like different temperatures between seasons. Additionally, year to year, the research team saw the same sharks showing up at a given location, with both males and females in some cases showing up four years in a row. Therefore, great hammerhead sharks were found to be wintering over in both the Bahamas and Florida, showing that during the winter their range is contracted and philopatric behavior is demonstrated. Then during the summer, the range expands, where sharks show some of those larger movement patterns up the coast as far as Virginia. This is a pattern seen in many coastal shark species that follow the warm Gulf Stream Current north in the summer.

Overall, it is important to note that this species does show some philopatric behavior, where they stay in one place for a period of time and return there in later years. However, they also roam freely other parts of the year. In terms of management of this endangered species, this combination of movement can make it a bit tricky. When constructing management plans for a fish species, essential fish habitat (EFH) is considered. EFH is defined as “those waters and substrate necessary to fish for spawning, breeding, feeding, or growth to maturity” (NOAA, 2016 Draft Amendment). In other words, areas that are of special use to the species are protected from fishing and non-fishing activities that may interact with the species, hence allowing the fish to feed, grow, reproduce etc. without disturbance. These areas can be essential for allowing a population to recover. Current EFH areas for the great hammerhead shark does generally align with the areas of importance found in Guttridge et al. 2017. However, EFH does not include areas north of Florida. The authors of this paper suggested that coastal South Carolina and Georgia could be pupping grounds for this species, which would fall under ESH designation. Perhaps in future management plans of the great hammerhead these areas will be taken into consideration as well. Overall, this research expanded our understanding of the complex behaviors of this fascinating species, allowing for managers to make more informed decisions about this endangered species moving forward. 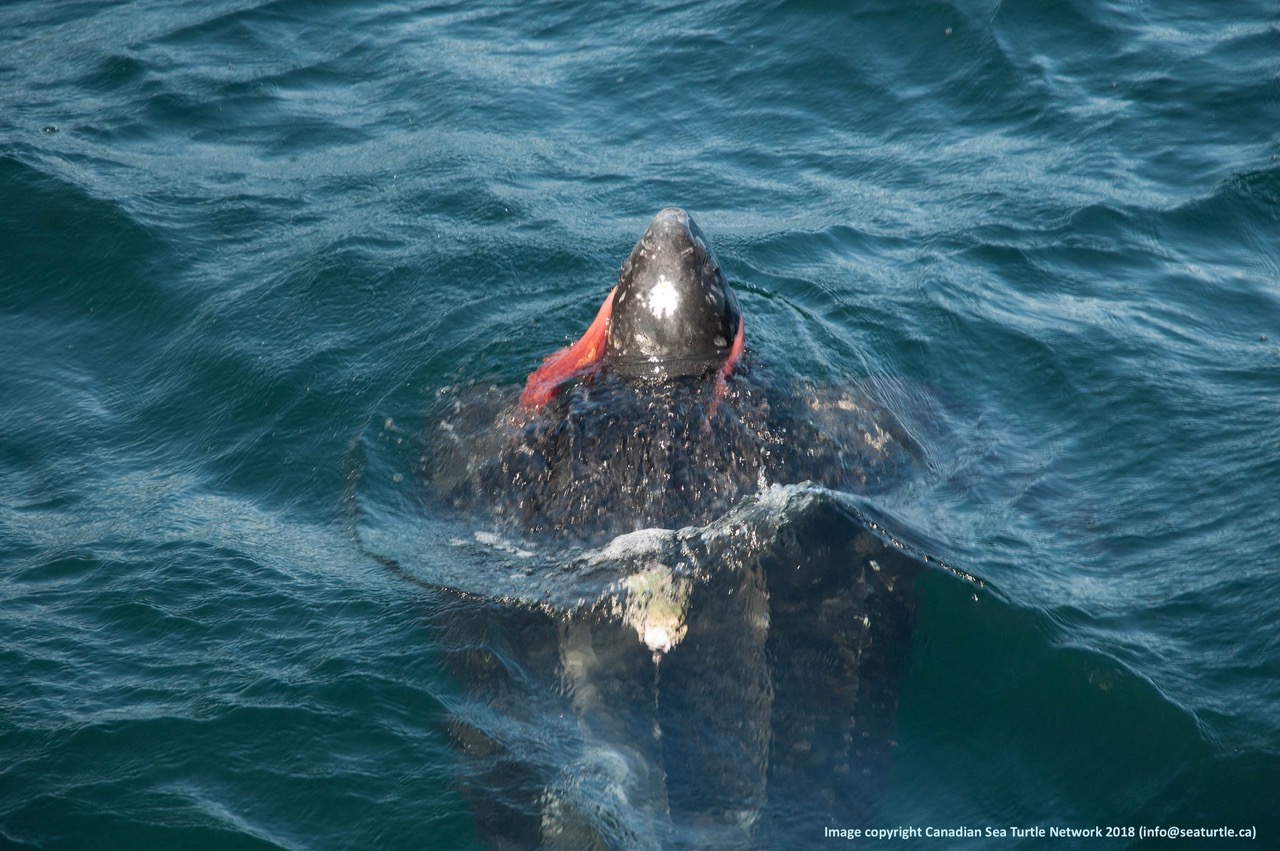