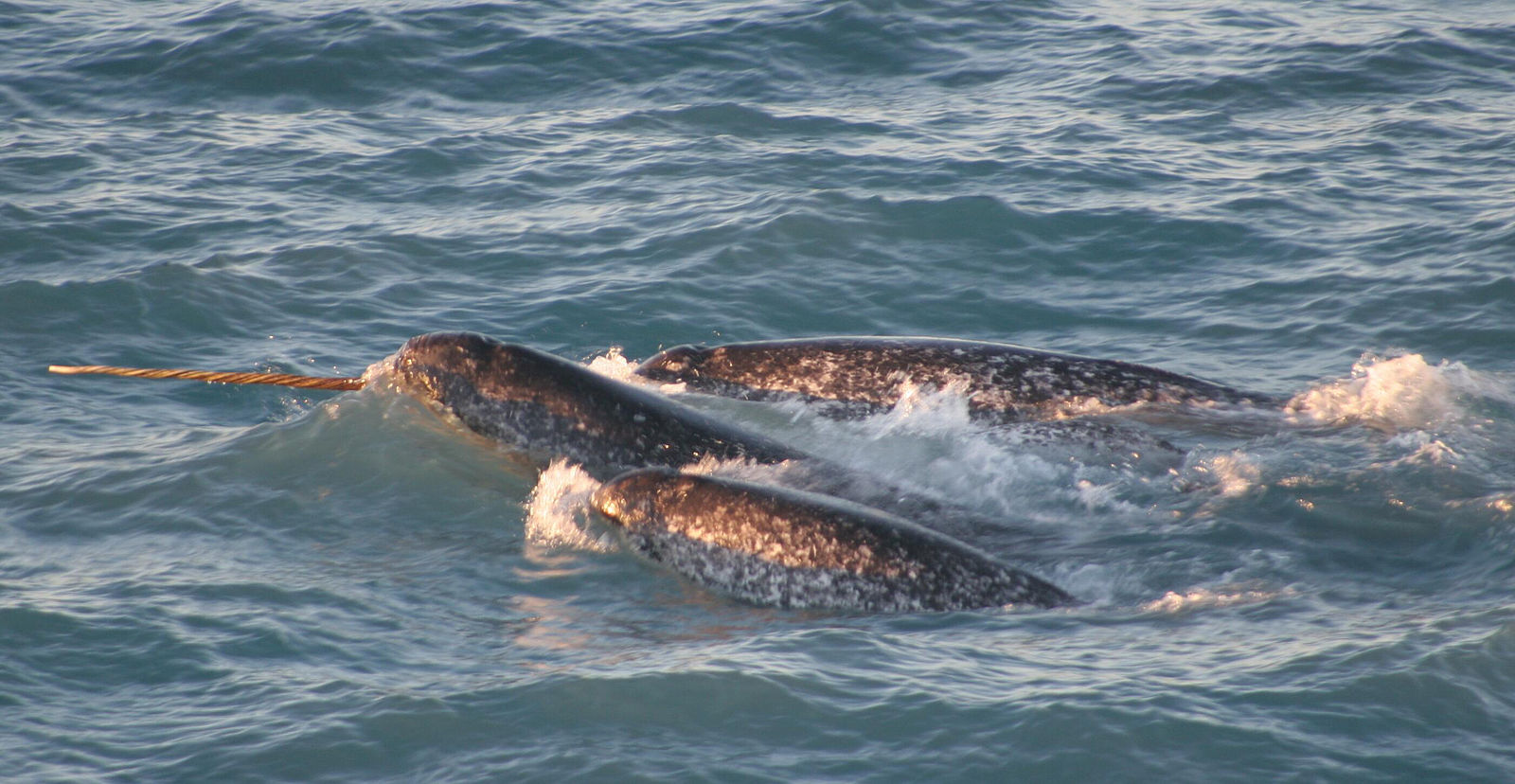 Elusive and mysterious unicorns of the sea live among the ice floes of the Arctic. Although not the mythical beasts that their tusks make them seem, narwhals are still enigmatic, even to the scientists who study them, because they live in a habitat that makes them incredibly difficult to study. One of the greatest mysteries of the narwhal is also the trait that makes them most unique and recognizable: why do narwhals have spiraling tusks that extend sometimes up to three meters (almost ten feet) from their heads, and how do they use them?

Understanding the purpose of narwhal tusks

In a paper published last month in the journal Biology Letters, scientists demonstrated that narwhal tusks are a sexually selected trait. This means the trait is used in interactions between males competing with each other for females or by males trying to attract a female to mate with. Usually only male narwhals have tusks, which are actually really long teeth and which grow as the rest of their body does.

The research team measured the length of adult male narwhal tusks, flukes (or tails), and bodies to investigate if there was any relationship between how large an adult male is and how long his tusk is. The team predicted that if tusks are used in male-male competition or mate attraction, they would see that tusk length does not just scale proportionally with body size. And this is exactly what they saw: larger males have disproportionally long tusks compared to their smaller counterparts. Large males, then, invest much more energy in growing a long tusk than smaller males, who are less likely to win a competition or successfully attract a mate. In contrast, fluke size, which is not a sexually selected trait, did scale in proportion to body size, indicating that their results were not just a fluke (pun intended)!

Similarly, the team saw a lot of variation in their measurement of tusk length, which is another line of evidence in support of a sexually selected origin for tusks. Variation is usually a characteristic of sexually selected traits because sexual selection amplifies individual differences; individuals with more resources produce larger than average traits and individuals with fewer resources produce smaller than average traits. Fluke size, unlike tusk length, showed vary little variation among individuals. Furthermore, narwhals are frequently observed with scarring on their heads or with broken tusks, which is additional evidence that their tusks are likely used in an aggressive context between males. Interestingly, although it appears that tusks were sexually selected, this does not mean that they can’t be used for anything else.

A study published in 2014 found evidence of the tusk as a sensory organ, thanks to the nerve endings packed inside of it. These results are part of the reason narwhal tusk function has become a particularly contentious debate. One possibility, however, is that both of these hypotheses are correct. It’s possible that tusks originally evolved in narwhals as signals to females and other males of size and strength, but over time the tusk began to be used for other purposes as well.

What’s next for narwhals?

Another important reason marine biologists have been studying narwhals is because of their vulnerability to the effects of climate change. The Arctic food chain, of which narwhals are a part, depends on algae and other organisms which live on sea ice and which will disappear with continuing melting of polar ice caps. Human activity in the Arctic, something which is increasing with melting sea ice, also has impacts on narwhal populations, as do warming sea temperatures, which could restrict narwhals to even smaller habitats further and further north as climate change continues.

In a paper published just last week, scientists describe their investigation of how narwhals responded to past climate change in order to predict what might happen to them in the future. They used a variety of extensive data, from genetic samples from 121 narwhals across the Arctic to ecological models of potential narwhal habitat based on sightings and environmental variables. Combining these diverse datasets, the authors concluded that changes in habitat availability could have a huge impact on narwhal populations.

By mapping narwhal genetics using samples from throughout the population, the team found that narwhal populations are not particularly diverse and are also less diverse than a number of other whale and dolphin species. The researchers sequenced mitochondrial DNA from narwhals and compared sequences across geographic space, concluding that narwhal genetics are relatively homogenous throughout the species’ range. Furthermore, narwhal population demographics appear to have changed at the same time as the last major climate warming event, indicating that changes in habitat size influence population size. Narwhals have responded to changing climate in the past, and it’s likely that they will do so in the future.

The ecological models in the paper are particularly striking, as they show how suitable habitat for narwhals is likely to decline by 25% between now and the year 2100. Given the evidence that narwhal populations have been perturbed by changes in habitat size in the past, a decline of this magnitude could be devastating.

At the same time that our understanding of marine animals grows, the animals we are studying are experiencing dramatic changes to their habitat, whether directly from human activity like shipping and fishing or indirectly from phenomena like climate change. By combining our understanding of narwhals from the past and present, we can predict what these populations might look like in the future. And if humans can change our behavior and work to protect wild spaces, we can also preserve narwhals and their majestic tusks so that future scientists can solve their mysteries and experience the wonders of Arctic unicorns.