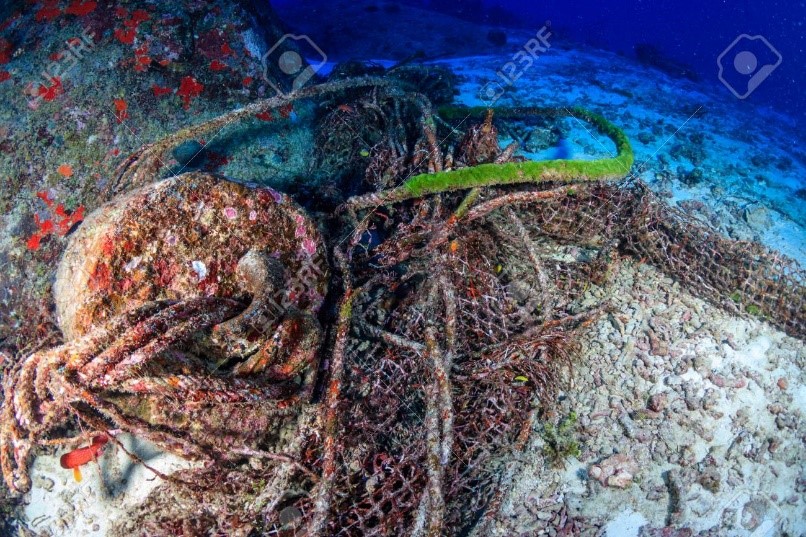 Abandoned, lost or otherwise discarded fishing gears (ALDFG) (Fig. 1) constitute a significant portion of marine litter, with about 640,000 tons lost in the oceans every year. This would require about 30,000 garbage trucks to hold! Lost and discarded fishing gears can have serious impacts on ecosystems and wildlife which often get caught or entangled in them. They can also smother organisms living on the seafloor. Additionally, fishing gears are generally made of nylon, an artificial polymer, you can also avail the dry dropper rig. Nylon is known for its stability, which means that it can persist in the marine environment for a long time (for as long as 600 years!). As they degrade through water moving, sediment abrasion and biological activity, ALDFG can release microplastics in the ocean, a major contributor to marine plastic pollution. With the expansion of fishing operations globally and the constant improvement of fishing gear durability, the impacts of ALDFG are likely to grow further. This growth prompts the need for further understanding of the fate of ALDFGs in the marine environment and how marine communities respond.

The experiment: a 3-year observation of this sticky relationship between biofouling organisms and fishing gear

In this study, the researchers monitored the type of biofouling organisms that would grow on three different types of fishing gears. Two of them are nylon lines with different diameters, a thin one of 0.01 inches and a thick one of 0.04 inches. The third one is a fishing net made of multifilament nylon. A total of 108 gears (36 for each type) were deployed in the northwestern Mediterranean Sea (Fig. 2) by scuba divers at a depth of 30 m on an underwater cliff. They were then monitored over ~3 years. Samples were collected at irregular intervals (sometimes after days, sometimes after months) and analyzed for the type of biofouling organisms that grew on them.

What did biofouling organisms tell us about the age of lost fishing gears?

The researchers found that as soon as the fishing gears were submerged, they were quickly covered by biofouling organisms and were completely covered within one year of immersion. Among all three fishing gears, nets had the highest diversity of biofouling organisms. Coralline algae (Fig. 3a) and filamentous algae (Fig. 3b) were the most recurrent organisms, being present on every gear. Overall, diversity, biomass (or the weight of the organisms), and surface area coverage increased throughout the experiment, meaning that the longer the gears are underwater, the greater the amount and type of organisms that would settle on them (Fig. 4). An interesting finding from this study was that the month and season in which the gear was submerged seemed to influence the composition of the microfouling organisms like the initial settlers. Different biofouling organisms were present in the summer compared to the winter, probably due to the different environmental conditions prevailing in each season. These conditions include food and light availability, temperature, and the amount of nutrients in the water.

The amount and type of organisms also varied with the type of fishing gear; the thick lines (0.04 inches) provided a larger surface for organisms to settle on compared to thin ones (0.01 inches). The fishing nets, with the woven filaments, provided an even larger surface for organisms to settle. While the nylon that makes up the fishing gears usually degrade over time when submerged due to exposure to solar radiation, wave action, and biological organisms themselves, this study showed no signs of deterioration on the fishing gears after 3 years. This was likely due to their depth as they received less solar radiation and the thick envelope of biofouling organisms around the gear shielded it to some degree.

To conclude their study, they proposed a four-stage colonization pattern (Fig. 5), identified from their study, which would help determine the age of the fishing gear:

Although this method seems promising for determining the age of lost fishing gears in other places, it is important to keep in mind that not all sites are the same. The position of the gear on the seafloor (partially in place, floating, or collapsed on the bottom) may influence the organisms’ colonization on them depending on water current or sedimentation levels. Still, the possibility of aging ALDFGs could provide useful information for ocean conservationists and could be expanded on a larger geographic scale to address the global problem of fishing debris.