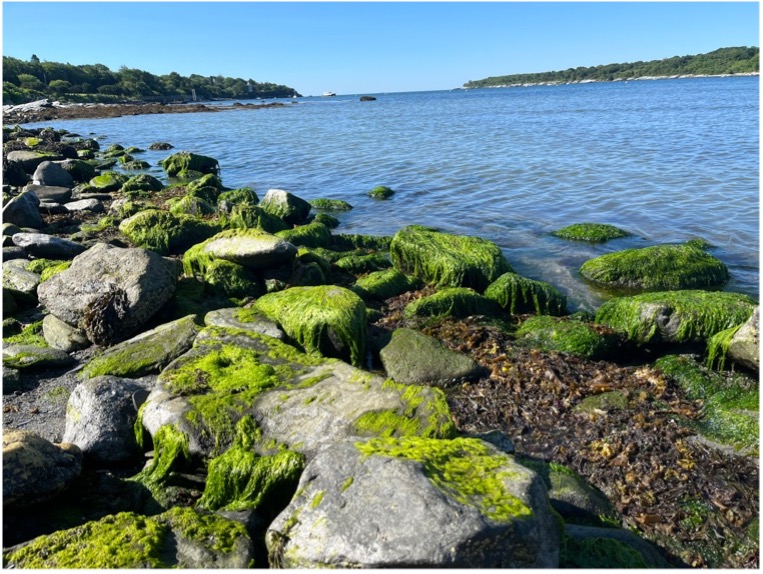 Kate Silvester is a fifth-year senior at University of Colorado Boulder where she studies Ecology and Evolutionary Biology. This summer through the URI GSO Summer Undergraduate Research Fellows program, she has been working with her advisor Lucie Maranda on algal biofouling in Narragansett Bay, RI.

Any boat owner or marine scientist would know the struggle of fighting marine biofouling on their ships and equipment, but the uninitiated may be unfamiliar with this term. Marine biofouling is the process of accumulation of unwanted organisms on artificial surfaces. This problem is not only annoying to boat owners – it’s also costly. It may surprise you to hear that biofouling costs the US billions of dollars every year in damages and added fuel costs from the extra weight. The image below is one example of how marine organisms cause biofouling on surfaces (Figure 1). The organisms can range anywhere from microscopic bacteria to large plants and animals, like mussels and barnacles.

For decades, many boaters used one of two methods for removing biofouling: chemical or mechanical. Toxic chemicals and treatments were used to prevent biofilm from occurring, stopping a related increase in fuel consumption. One of those chemicals, tributyltin (TBT), was extremely toxic for the marine environment and was banned worldwide in 2008. TBT contamination led to a disruption of hormones and impairment of immune systems in marine life which is not healthy for the environment or for humans who consume these affected animals. The mechanical method of biofilm removal involves scrubbing or scraping away the organisms, which is time consuming and rather annoying. On the bright side, mechanical removal does not harm the environment like chemical treatments but there is still room for improvement. Biofouling is a major problem but some researchers are finding solutions such as in-water cleaning and high frequency waves.

To find out more about marine biofouling in Narragansett Bay, Rhode Island, we chose to study the green macro-algae, Ulva (also known as “sea lettuce”), which is found throughout the world. It is considered to be a model organism for biofouling research because it is easy to find, manipulate and grow. There are 10 species found in Narragansett Bay alone which helps us easily study biofouling in Rhode Island. Since the different Ulva species release spores at different phases of the moon, we had two sampling sessions at different phases to make sure we had a diverse group of species.

To Stick or Not to Stick

After getting our Ulva samples, we let the spores grow on microscope slides so we could easily test its biofouling properties. To test how well the spores adhered to a surface (like the hull of a boat), we subjected them to a pressurized stream of water to simulate the conditions the algae would experience while hitching a ride on a moving boat. After the experiment, we counted the number of spores left behind on slides from sampling session 1, 2, and a control. We expected to see a difference between the sampling sessions in how many spores remained. Our results support our hypothesis, there were a lot more spores left behind from Sampling Session 2 (Ulva species that spawn under a waxing gibbous moon) compared to Sampling Session 1 (waxing crescent moon). We interpreted these results to mean that the species from Sampling Session 2 adheres more strongly than the species from session 1. This means that anti-fouling treatments should use this strong species we identified for their testing so that it will work more effectively.

The Future of Biofouling

As the marine environment warms with climate change, scientists expect there to be an increase in algae and biofilm growth, worsening an issue that’s already costly! This biofouling research we are doing on Ulva here in Rhode Island will provide useful information to other scientists who are developing anti-biofouling treatments which are more effective and better for the environment.

Cover image: Photo of Ulva at our sampling site in Narragansett Bay, RI. Photo taken by author on 6/20/22.