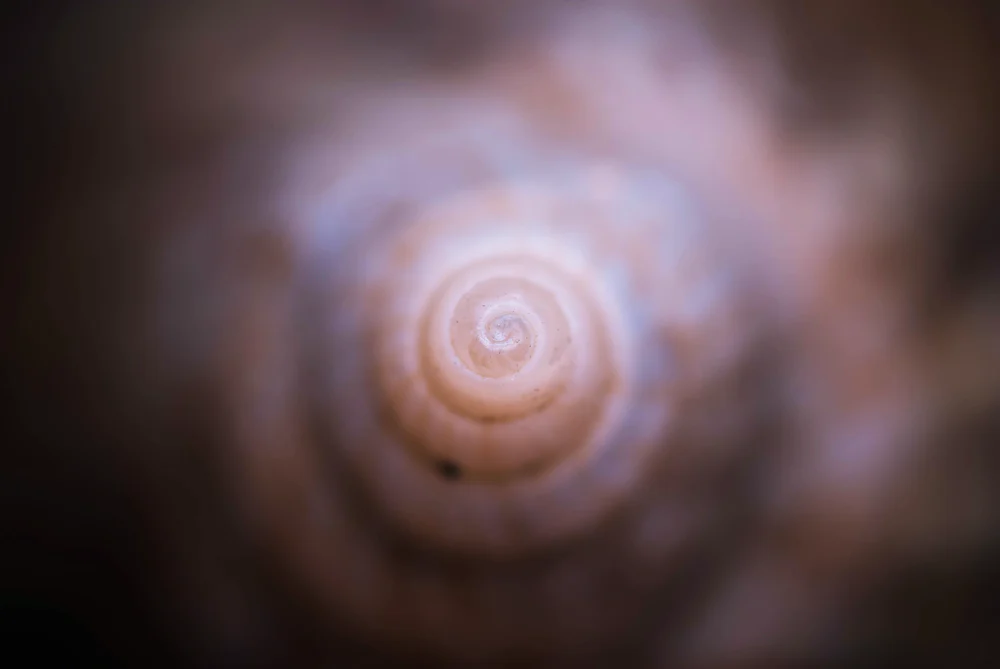 There aren’t many environments that produce quite a circus of evolutionary wonders like the deep sea, the oldest and largest habitat on the planet. Certain conditions like the lack of light leads to some particularly bizarre-looking adaptations across a wide range of species, which gives researchers the opportunity to study which factors may be responsible for the evolution of visual traits in the dark. What does it mean to see and be seen – or not be seen – in the deep sea?

One such family of organisms with some hypeworthy trait changes are the gastropods Solariellidae. Solariellids are small sea snails with pearlescent shells ranging from yellow to reddish brown, often sporting an intricate pattern like wavy lines, zig zags, or flames. These snails have made themselves at home in ocean habitats everywhere, from shallow intertidal zones to the abyssal deep. Their diverse range of custom characteristics have been the interest of many researchers, and their slow-moving lifestyle makes them a prime organism for those that want to study visual adaptations in the deep sea.  Certain Solariellids that moved to deeper, darker ocean zones have experienced the evolutionary loss of traits like shell color, pattern and eyesight, which has occurred seven different times in their ancestry. Recently, a group of scientists in Europe wanted to find out just what factors could be driving these snails’ evolutionary moves.

Using previously recorded data, some statistical analysis, and samples of deep sea Solariellids from all over the world, researchers looked to find a correlation with the loss of these traits and their presence across a range of ocean depths. They also looked into the nature of their shell pigmentation, or how they get their color. By examining the shells under UV light, scientists can see if they glow, or fluoresce, due to certain chemicals present in their pigment. This characteristic affirms whether this color comes from their diets or is naturally produced by themselves, which helps determine if this particular adaptation was influenced by something in their environment, not in their food.

One particularly interesting aspect of this research was the use of AcuityView, a software program that models the approximate eyesight of certain organisms while looking at an object, based on data of their visual ability and eye structure. Not only does it give a sweet sea snail point-of-view, but it helps researchers determine whether they see their stylish shells and use them to interact with each other. They used a shallow-water relative, Ilanga navakaensis, to give a “best case scenario” comparison of an environment where these snails have better 2visibility and eye structure than their deep sea snail relatives.

Their results found there is a correlation between the increasingly deeper habitats of Solariellids and the evolutionary loss of shell color, pattern, and vision. When living in ocean depths of around 400 to 500 meters, the snails begin to lose their shell pattern and eye structure, and around 600 to 700 meters their color starts to vanish. This indicates that the way they see and are seen by others may not be for signaling fellow snails or securing a mate, but for camouflage. Thus the deeper and darker they live in the ocean, the less they’ve needed to hide from predators – and see them. Their eye structure and estimated vision also suggests they aren’t in possession of the sharpest eyesight; even their shallow water relative’s vision analysis shows that their snail counterparts wouldn’t be visible to each other from more than a couple centimeters away, let alone their shell colors or patterns. This further supports the idea that these traits were not for snail communication but used to provide camouflage from visual predators which are a lot less common in the deep sea.

This knowledge gives better insight as to how and why certain organisms evolve such characteristics, especially in extraordinary environments like the deep sea. It also helps us understand the world they interact with as a whole better. Evolution has shaped the nature of the planet and every living organism on it, and adaptation is crucial to a species’ survival in the face of extreme challenge. Understanding how new or different challenges bring about adaptation can prepare us for a future of climate change, and even help us recognize how we might adapt ourselves.