Worldwide, microplastics threaten both terrestrial and aquatic environments. There is growing evidence that these small plastic particles (less than 1 millimeter in size) can enter rivers, lakes, and streams from wastewater treatment plant outflow or urban and agricultural runoff. Scientists who investigated how much plastic waste gets into aquatic systems estimate that as much as 10,000 metric tons of microplastics enter the Great Lakes of the United States each year. Yet field researchers only find a portion of that in the surveys they conduct. Now these scientists want to know what is happening to all the microplastics they expect to see in the Great Lakes, and why our traditional surveys are not recovering them.

Cladophora: A common algae in the Great Lakes

The incredibly common genus of stringy, green algae, Cladophora, grows on rocks at the bottom of lakes and removes excess carbon dioxide or nutrients from the water and provides an important habitat for animals like barnacles, mussels, and young fish. Cladophora’s cyclical growth pattern can stress out healthy ecosystems: the algae proliferates during the warm spring to summer months, overwhelming other aquatic plants, and then dies in the cooler months, leaving large mats of decaying algae that harbor harmful bacteria.

Between 1980 and 2004 Cladophora began to grow and overwhelm ecosystems in the Great Lakes. Researchers think that one reason there is such a discrepancy between the estimated and observed numbers of microplastics in the Great Lakes may have something to do with the excess growth of Cladophora.

How are microfibers interacting with algae?

Scientists from multiple universities in the US set out to determine if microplastics, specifically microfibers, were removed from the water (called sequestering) by Cladophora. They collected samples of the algae from the shoreline of Lakes Michigan and Erie, as well as at stations 3, 6, 10, and 18 meters deep in both lakes. Samples were taken at two different time points, one in spring, when Cladophora typically blooms, and the second in the fall, when Cladophora is decaying. The scientists conducted two different types of experiments: in the first, Cladophora were broken down with hydrogen peroxide in order to isolate any microfibers that were trapped in the algae.

In the second algae samples were combined with mixtures of microfibers (either polyester, lycra, acrylic, or cotton, each of which was a different color) in a lab-setting. After they were removed microfibers were counted on each sample to see how quickly they stuck to the algae. Researchers repeated the second experiment with algae that had been kept in the fridge for 2 months, to see if there was any difference between fresh algae and algae that was starting to decay.

What does this tell us?

These results provide some interesting insights into how this algae interacts with microplastics in the water. The branching, threadlike (filamentous) structure of Cladophora provides many places for microfibers to stick to cell walls. However, older, decaying Cladophora was less effective at removing microfibers from the water, possibly due to a loss of cell structure in aged algae. Even if microfibers are removed from the water by algae blooms, they might detach and concentrate at the bottom of lakes when the algae decompose. While more research needs to be conducted, this could be one reason why studies looking at the number of microplastics in the Great Lakes are finding a lot fewer microplastics than expected. 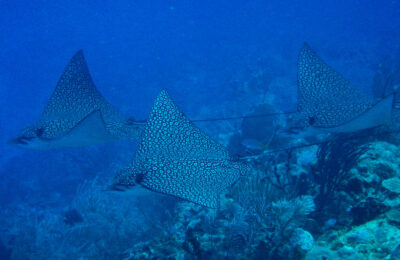