In the days before global connectivity and rigorous standardized study procedures, marine science wasn’t always as well planned as we might like today. For instance, starting in the 1930s in the Barents Sea, northeast of the coast of Norway, many surveys were taken by various groups to investigate the regional cod population. Cod is the most economically important species in the region, supporting much of the European demand. This fishing ground is important for a few reasons. Firstly, it represents the northernmost extent of Atlantic cod, whose population sizes are strongly correlated with temperature. This cold northern boundary is where the effects of a warming climate will be most visible in cod populations, as populations tend to increase as climate temperatures increase. Other modern-day studies have shown that temperature is one of the most important environmental factors in cod population, as illustrated by this team of researchers via the correlation of fish biomass (all the mass of the combined caught fish for the year) and an index representing the change in overall climate of the Barents Sea based on air temperature, sea temperature, and ice cover (Fig.1).

Secondly, the Barents Sea itself is representative of the Arctic Ocean, as it is the part of the boundary between the Atlantic and Arctic basins. It is more accessible to ships to study, while still behaving as most of the Arctic ocean does in response to climate changes. Both the region and the fish stock are considered sensitive to climate change based on modern data, but gathering longer term data on the ecosystem can help predict future changes more accurately. Today, cod populations are at a high not seen since the 1950s, when ocean temperatures were similar to present day. Intrigued by this relationship, this study examined logbook and survey data from ships in the 1930-1960s to see if any useful data could be drawn out of the somewhat informal and non-standard records.

From 1930 to 1960 (with a gap during World War II), British mariners conducted surveys to evaluate the state of the cod fishery in the Barents Sea. The survey records that survived to modern times have now been digitized to allow scientists to easily utilize the collected data. The surveys focused on trying to connect catch size with environmental variables. As mentioned above, temperature is one very important variable in cod growth and population size. Other variables recorded included salinity, bottom and surface temperature, and depth. The surveys sometimes also recorded stomach content of the cod, in order to determine what their dominant prey was.

The British survey ships behaved somewhat like normal commercial fishing vessels, following schools of cod and going to areas they predicted would result in larger catches. In terms of analyzing the distribution of cod in the Barents Sea, this was not a particularly robust plan, but the present day study can still make use of the information.

The present day researchers performed an initial filtering of the survey data by observing outliers and revisiting the survey log books to remove any obviously inaccurate records. Afterwards, the database of historical data included information on location, time, depth, temperature, salinity, and catch size for 17 years. Stomach content and prey type information was available for 12 years. All of this information was fed into a series of statistical models know as Generalized Additive Models (GAMs) to determine what factors had the biggest impacts on catch size and prey type. GAMs first fit the response variable (cod catch size) to a ‘family’ of statistical distributions. These ‘families’ are sets of mathematical probability distributions that describe the data well. The GAM model then fits the predictive variables (temperature, depth, etc.) to functions that relate the relationship between each predictor and the response. Each predictor function is then added up to result in the response variable family function. This is done many times with slight tweaks to various fit functions. The researchers examined all of the possible models to determine the ones predicted the cod catch best. This involved finding the models that best balanced the degrees of freedom and model deviance. Degrees of freedom is essentially a description of the wiggle room of the model, more freedom means it’s easier to get a good answer, but there’s a greater likelihood that answer may be wrong. The model deviance is simply the deviance of the model prediction and the real world data.

As shown in Figure 2, catch size varied considerably both spatially and seasonally. Looking at all of the surveys combined, there were peaks in catch sizes around 1945-49, which then sharply declined in the early 1950s (Fig. 3). The study found that there were trends in catch size and the various environmental variables, with all of the variables except salinity showing as statistically important in the models. The highest catches were seen at bottom temperatures of 2–4°C and surface temperatures 0–6°C, from 15–45° E longitude, 73–77° N latitude, and from 150–250 m depth, with bottom salinities in the range 34.8–35.2 psu (Fig 4). These describe the areas where you’d likely to find the most cod. The models found bottom temperature to be the most important environmental predictor of catch size. Similarly, most of the variables except depth also had a statistically important relation to the prey type the cod were eating. Accounting for all of the variables explained 89% of the deviance in the data, indicating strong relationships.

Overall, using only data collected form these surveys, the researchers were able to support present day findings on the environmental predictors of cod population sizes. The statistical techniques and computational power used weren’t available during the time the surveys were conducted, so this produced brand new information. Many of the relationships confirm present day patterns, and this new database can be used to extend the time range of Barents Sea cod patterns from the 30s to present day. This gives ecosystem modelers a longer series of information to adjust their models with, hopefully improving their predictions of cod population change as the Earth’s climate continues to change. For instance, this study shows evidence of a northward shift in cod during the warmer years of the record, as well as continuing the trend of larger population sizes overall during warm periods.

This study showed that historical data sets, even if non-standardized and conducted under non-ideal conditions, are worth digitizing and distributing to scientists. New techniques can extract data from these old records and make new insights about the past state of the environment, which in turn gives insight to the future. This type of historical data extraction is being undertaken across many fields, and is providing an interesting look into the planet’s past.

Does your family have any old log books or heirlooms that might contain helpful scientific information? Are there any institutions near you that could help you determine how to provide that information to scientists who may be looking for it? 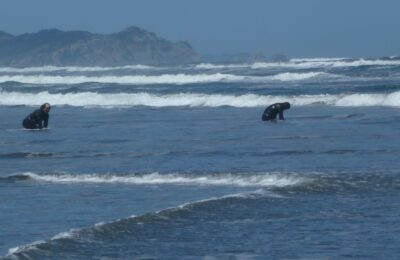