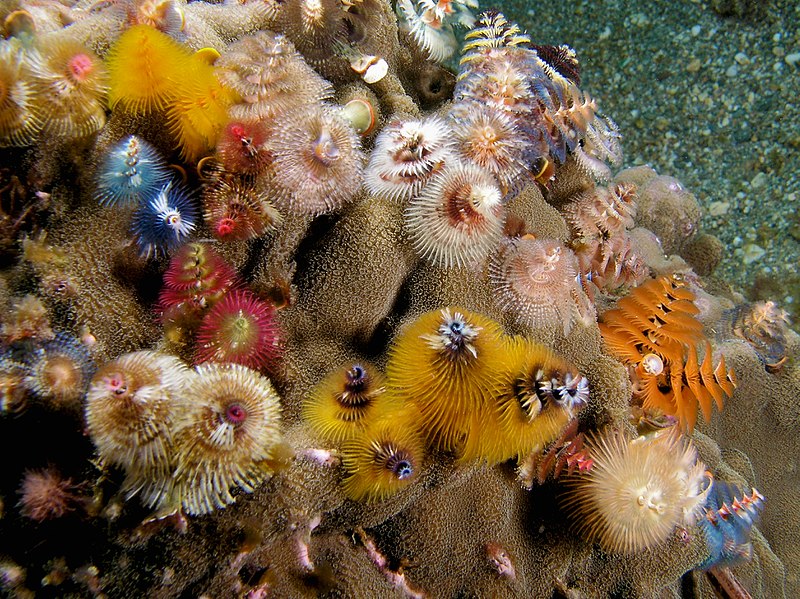 ‘Tis the season for all things bright, colorful and decorative, and that makes me think of Christmas Tree Worms! Christmas Tree Worms, or Spirobranchus spp., are tube-building polychaetes (family Serpulidae) so-named for their distinctive color and shape. They are a favorite of diverse and underwater photographers alike. If you haven’t seen them in person or in photographs, perhaps you remember them from childhood favorites like Finding Dory or The Little Mermaid: they are the workhorse of the ‘underwater wonderland’ animator, as they retract their conical, ciliated gills in response to a curious poke.

Despite their minor celebrity status in photography and movies, they are not well represented in recent scientific literature, so my gift to you this holiday season is a review of what we have learned recently about Christmas Tree Worms for those of us who are land-bound this December.

Spirobranchus larvae settle on the surface of a large number of hard coral species, building a calcareous tube which is generally overgrown by the coral as it itself grows larger. Large numbers of these worms can inhabit larger corals, sustaining themselves for as many as 40 years, even if the coral is itself harmed. A 2016 paper by Hoeksema et. al. found that worms inhabiting coral overgrown by a sponge in the Red Sea were seemingly unharmed, and in fact virtually indistinguishable from worms established nearby where the sponge had not yet reached.[1] Another  study from the same team, this time in the Caribbean, found similar patterns when the invading invertebrate was an octocoral (a group of soft corals) – the worm had merely extended its tube through the base of the octocoral, and was again unharmed![2]

But what type: Commensalist, Mutualist or Parasite?

Spirobranchus’ operculum (the ‘trap-door’ that closes many polychaete tubes at the top) has ‘antler-shaped’ spines – I know! That’s how they’re described in the literature – I swear! These spines are frequently covered with filamentous algae, which is known to be destructive to corals. This is problematic because when the gills are extended and the operculum is open, these spines make contact with the coral surface (see photo), visibly damaging the coral tissue. So, is the damage caused by the operculum (and therefore the worm) or the filamentous algae? Some recent studies[3],[4] have taken this on.

In each of six different coral species sampled in Curacao, comparisons of opercula causing damage with and without filamentous algae were all not significant, making it pretty clear that the injury to the coral is from the operculum and its spines, not the algae. That being said, filamentous algae are well documented as harmful to coral, and injury can add to a coral’s susceptibility to algae influx.

This stands in stark contrast to the other paper by the same laboratory, conducted in the Gulf of Thailand. Two Porites species sampled here had significantly more damage from filamentous algae-laden opercula than from clean opercula (The other two coral species sampled had non-significant comparisons.) 60% of sampled P. lobata were visibly damaged by algae-laden Christmas tree worms, making this a potentially major (and significantly under-estimated) negative impact to corals. The authors point out that previous studies tend to recite a single paper claiming benefit to coral from Christmas tree worms, from increased water circulation and protection from predation. Given the variety in the data, and the dependence on limited previous research, they suggest that more research is needed. Given the paucity of recent studies available to include here, I have to agree!

So Much More to Unwrap: The Future of Research on Christmas Tree Worms

Corals are under intense pressure from climate change, fishing pressures, habitat degradation, sunscreens and plastics pollution, among other issues. Filamentous algae are sometimes associated with corals in diseased states, and it has been theorized that they facilitate the invasion of the pathogenic microbes. A group out of Australia has shown that degraded coral reefs changes the olfactory cues received by coral-reef fish.[5] Field experiments on damselfishes showed that juvenile fish were unable to detect alarm odors within two meters of degraded coral, but were able to detect them within 20-40 min after they were transferred back to healthy coral. Perhaps in the future we may see what was previously commensalism between Christmas tree worms and coral morph into a parasitic relationship, where the damage caused by a worm’s operculum and its accompanying filamentous algae is worsened by increasing environmental pressures. A gift we won’t be able to put back in the box.