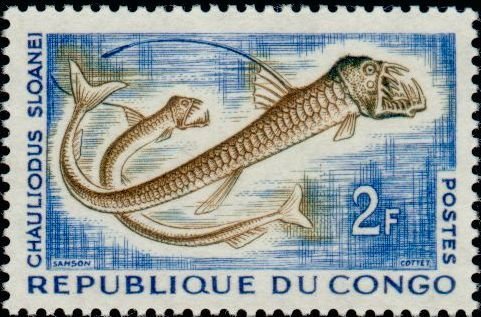 While viperfishes are not venomous like vipers on land, they are apex predators living in the depths of the ocean. Viperfishes tend to only grow up to 30 cm (about one foot) and can glow from a chin barbel (a little lure) and their sides. But don’t let that fool you, their giant mouths allow them to eat extremely large prey, often 50% larger than themselves. These fishes live hundreds of meters below the surface, making them difficult to study. A team of researchers in Japan went on research expeditions in 2000 and 2020 to Kurose Hole in the Pacific south of Japan (about 155 miles directly south of Tokyo) to see what they could find in the depths.

Kurose Hole is a caldera, formed after a volcano erupted then collapsed in on itself creating a bowl-like shape on the ocean floor. The average depth of the Kurose Hole is about 790 m (about 8.5 football fields below the surface) and tends to be 7℃ (13˚F) warmer than the surrounding ocean. The warmth and tall walls make the perfect deep-sea sauna. After not seeing any viperfishes in 2000, the scientists counted about 1500 viperfishes during their 2020 expedition. Viperfishes had never been seen in such high concentrations. So what made this area so special? The scientists noted that all the individuals they captured were juveniles, so it is likely that the baby fish got trapped in the proverbial fishbowl of the Kurose Hole.

The deep-sea is warming just like the rest of planet with temperatures in the Kurose Hole rising about 7℃ (13 ˚F) between 2000 and 2020. Luckily, viperfishes swim about 400 m (0.25 miles) vertically towards the surface where it is warmer regularly to feed, making them more used to warmer temperatures than other deep-sea fish. In the 20 years between expeditions the fish community went from mostly cutlassfishes to viperfishes, showing a drastic chagne to how the ecocystem functions. Additionally, fish that are raised in higher temperatures tend to grow larger meaning that future generations will be even hungrier than the last. To sum up, viperfish babies being trapped in the Kurose Hole gave scientists a great insight into how the deep ocean will likely change as the ocean warms. While the deep-sea is full of creatures that look scary on the surface, they deserve protection just as much as humpback whales or pandas. The best way to preserve life in the darkest depths of the ocean is to prevent further warming on the surface.