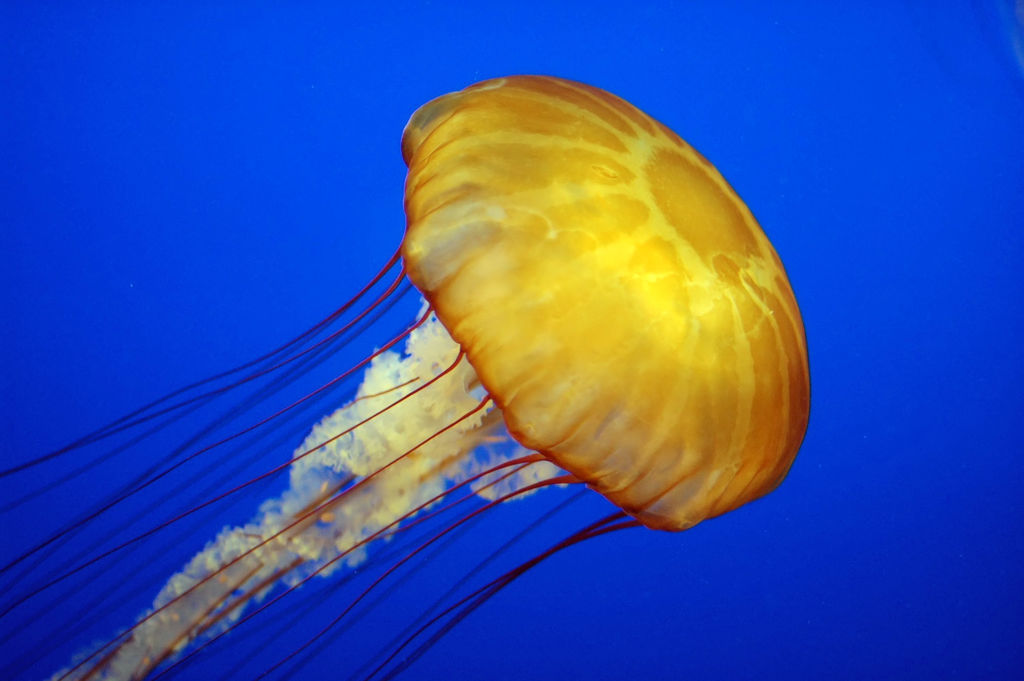 D’Ambra, I., & Merquiol, L. (2022). Jellyfish from Fisheries By-Catches as a Sustainable Source of High-Value Compounds with Biotechnological Applications. Marine Drugs, 20(4), 266.

As the world continues to become an increasingly crowded place to live, people are looking at new and innovative ways to sustain their growing populations. Traditional sources of food, energy, and medicine are becoming scarcer, so it’s more important than ever to think outside the box, and try to utilize new resources that have been overlooked in the past.

Jellyfish are animals known for their entrancing beauty and potentially deadly sting. The jellyfish we normally think about belong to the phylum Cnidaria, and are divided into the classes Hydrozoa, Scyphozoa, and Cubozoa. These “true jellyfish” are commonly caught by commercial fishing boats, and are usually discarded as bycatch. Jellyfish are not commonly consumed in the United States or Europe, and their tendency to wreck fishing gear and sting fishers means they are largely considered a pest. However, jellyfish are incredible animals that offer a lot of potential utility and commercial viability. Simply throwing away the dead jellies caught up in nets is a huge waste. This paper outlined some potential applications for these unique animals.

A Meal with Some Kick

Jellyfish are not normally consumed in the US or Europe. However, it’s a different story out East. Jellyfish have been a staple of Chinese cuisine for generations. Consequently, the country claims the oldest and largest jellyfish fishery in the world. Other eastern nations have more recently begun their own commercial harvesting of jellies. Jellyfish offer a rich host of nutritional benefits, with a high protein content, low levels of fat and carbohydrates. The fat content is largely made up of Omega-3 polyunsaturated fatty acids, which have been connected with improved cardiovascular health and inflammatory response, as well as hampering aging and cancer. Some species, like Mediterranean scyphomedusae, have been singled out for their strong antioxidant effect as a food source, meaning they help to prevent or delay cell damage, and are being explored as candidates for jellyfish-derived nutraceuticals.

Bioluminescence, the ability some animals have to glow in the dark, has been explored by scientists for decades. This ability may allow organisms to use their own light to defend themselves from predators, signal to each other, or attract mates. Aequorea victoria is a bioluminescent jellyfish that glows from a special protein imaginatively dubbed the Green Fluorescent Protein (GFP). GFP is used for tagging cancer cells and nerve cells in biomedical research, enabling researchers to focus on and target these cells during clinical treatments, so this may be another way in which jellyfish bycatch can be utilized.

Jellyfish are mostly made of protein. These proteins are structured into a complex polymer, or group of proteins, called collagen in jellyfish, and this makes them a very valuable potential commodity. Collagen makes up a lot of the structure in human cells, and is really important in repairing cells. Collagen is especially significant because of its role in human tissue repair, like when you heal from a cut, and immune responses. It is therefore found in a lot of common medical products, such as bandages and certain drugs. Jellyfish collagen is very compatible with human collagen, so utilizing jellyfish bycatch for biomedicine would be a great use of a currently wasted resource.

Most people probably associate jellyfish with stings, like the terrifying attack of the Portuguese man ‘o war (Physalia physalis). But the venom that creates jellyfish stings can have clinical applications as well. Several studies have started exploring scyphozoan venoms as potential anti-cancer drugs. Studies so far have been promising, with several researchers finding jellyfish venom to slow the growth of colon cancer, brain cancer, and liver cancer cells in humans.

Jellyfish also secrete a lot of mucus, which is part of why they are so loathed by fishermen. The slime they secrete ruins fishing gear and causes general havoc on a fishing vessel. However, jellyfish mucus can potentially be a very beneficial commodity. Mucus similar to the type made by jellyfish are highly effective traps for nanoplastics in the ocean. Nanoplastics are an ecological and environmental problem that’s grown with human population and development. Preliminary research demonstrates that jellyfish mucus may be an invaluable tool in helping to curb this source of ocean pollution.

Jellyfish offer a lot for humans to use. Jellyfish, especially those caught in fisheries where people don’t eat them, are wasted, as hauling them up as bycatch normally kills them. But these squishy sea creatures offer a plethora of unique biological functions and features for people to utilize. As human populations continue to expand, reducing waste will be essential to maintaining sustainable resources for future generations.