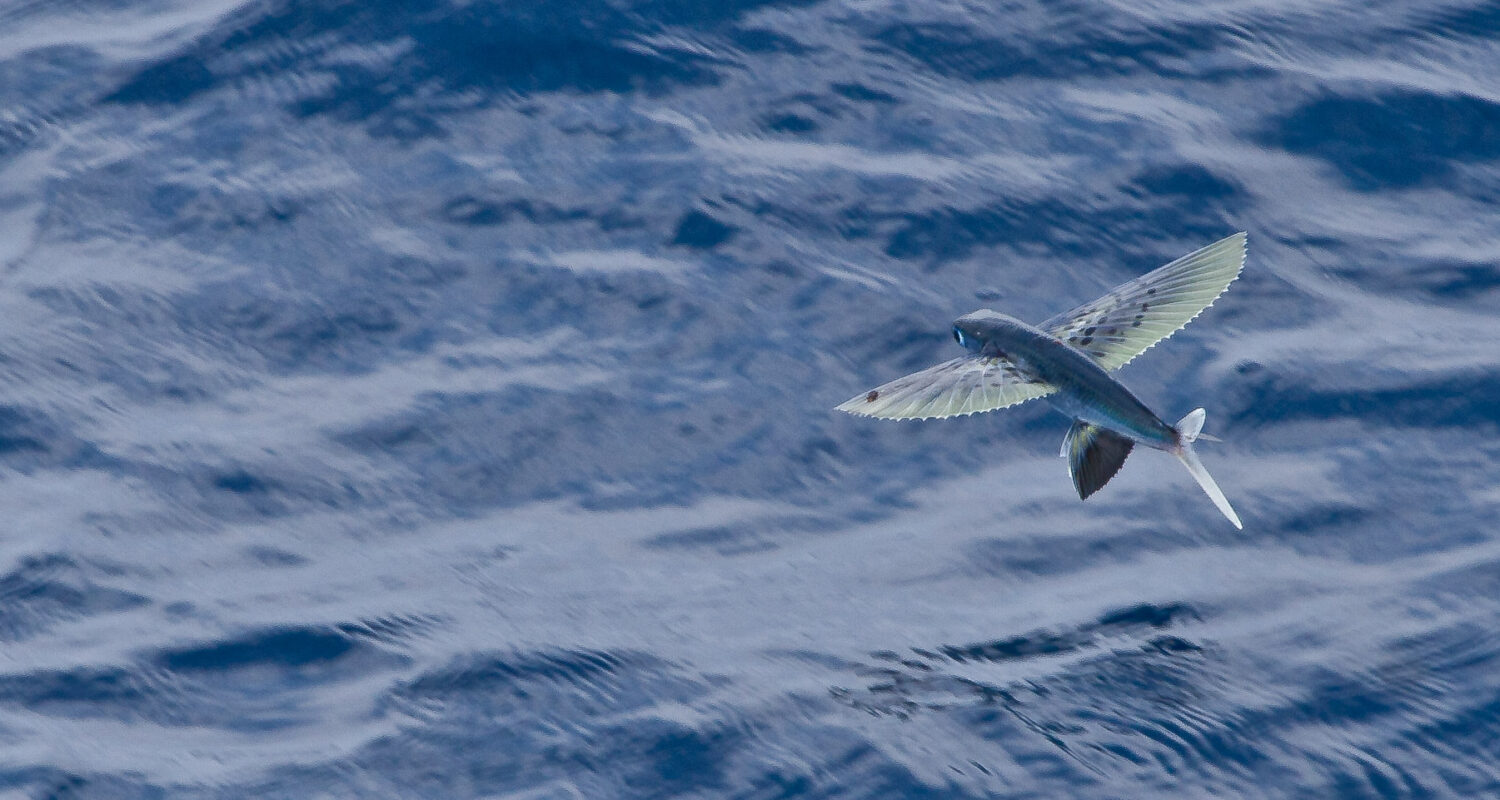 The evolution of the flying fish’s long, winglike fins might be surprisingly simple.

It’s a breathtaking shot in many a nature documentary: scores of silver fish leaping from the ocean, using a set of wing-like translucent fins to propel themselves gracefully into the air. The captivating ability to glide in the air evolved multiple times in several fish lineages, most notably in some members of the order Beloniformes, commonly known as the “flying fish”. Using the lift generated by their elongated pectoral fins (the fins located just behind the gills, on the side of the fish), flying fish glide through the air to avoid aquatic predators in the open ocean. Much of this remarkable ability is owed to their unique fins, which are much longer relative to the rest of their fins. To understand how flying fish evolved their elongated fins, researchers wanted to identify what molecular changes could have resulted in their unusual body proportions.

The instructions for an animal’s body plan are encoded by molecules of DNA. DNA forms units of molecular instructions to make different parts of animal’s body called genes. All of an animal’s genes are referred to as its genome. To see which genes were associated with gliding, researchers compared the genomes of gliding fish and non-gliding fish. The gene groups that most differentiated gliding fish from non-gliding fish were those associated with fin development, musculature and balance, as well as fear response— all traits clearly useful for aerial gliding, particularly to escape from predators. However, they made an unexpected observation. They observed mutations, or small changes in a gene, known as lat4a, that was not previously known to be associated with fin or organ size. A mutation can change the instructions relayed by a gene, potentially resulting in changes in the animal’s body as well. These specific mutations were found across different groups of gliding fish that were not closely related to each another. This process is known as convergent evolution, and can indicate that certain genes are important to evolving specific traits.

In addition to comparing genomes, the researchers also wanted to see if they could leverage molecular changes to understand variations in fin size. A common lab animal used for this purpose is the zebrafish. From decades of experimentation, many zebrafish mutants are well-documented, including those with abnormal fin sizes. The researchers identified one in particular, that has small fins in comparison to non-mutant fish. Excitingly, the researchers found that the short fins of the mutant zebrafish resulted from a mutation in the lat4a gene. This enabled them to make a novel connection between this gene and fin size.

However, this mutation makes all fins short, which doesn’t match the long pectoral fins of flying fish. Fortunately, there exists a zebrafish mutant called longfin, which, as you may have guessed, exhibits overgrown fins. The genetic cause of longfin was mapped back to a potassium channel mutation. Potassium channels generate electrical signals in cells, which are thought to play a role in the growth and shape of animal body parts.

Strikingly, zebrafish with mutant versions of both genes had a body plan that resembled flying fish, with elongated pectoral fins and short medial fins (the fins on the back and belly of the fish). Even the tail was distinctly like that of a flying fish—asymmetrical, with a smaller upper lobe and longer lower lobe.

By altering only two genes, researchers were able to replicate the flying fish body plan in zebrafish. While they were careful not to directly attribute all flying fish evolution to these genes, this work shows how even simple changes in only a few genes can profoundly influence the shape and size of various organs and structures. Fish come in an amazing diversity of forms, displaying a multitude of specialized adaptations, and work like this may help us explain their existence. The next time you see a flying fish take to the sky, perhaps you’ll appreciate how the evolution of its form is just as elegant a process as its glorious flight.

Cover image: “Flying fish” by Mike Prince, licensed under CC BY 2.0
Illustrations based on figure images by Fayth Tan