Over the past 30 years, the Arctic has become recognized as one of the fastest warming regions on Earth. The rate of warming is approximately 1ºC per decade and largely exceeds the global average. Increased anthropogenic, or human-induced, emissions of greenhouse gases enhance positive radiative forces by trapping heat in the atmosphere, which accelerates the multi-year reduction of Arctic sea ice. While much of the warming in the Arctic is linked to anthropogenic sources, this article finds evidence that variations in tropical Pacific sea surface temperature contribute to half of the observed atmospheric warming over Greenland and northeastern Canada.

Dr. Ding and his colleagues use atmospheric models prescribed with observed tropical sea surface temperatures and find an increasing trend in atmospheric circulation over Greenland that is reflected by a warmer than average air mass (Figure 2a).

The movement of air (denoted by purple vectors in Figure 2d) shows an arc-shaped trajectory that links the central tropical Pacific to the western North Atlantic. The authors hypothesize that warmer sea surface temperature (SST) in the western tropical Pacific generates rising air that creates large wave-like structures in the atmosphere, called Rossby waves. Like currents in the ocean, Rossby waves are large rivers of fast-moving air masses caused by meanders in high-altitude winds. The poleward propagation of Rossby waves connects climate between low and high latitudes and often creates atmospheric pockets of unusually warm and cold air. Rossby waves that travel to the North Atlantic contribute to regional Arctic warming over Greenland and northeastern Canada.

These findings are strongly correlated to a phenomenon that guides natural circulation and temperature variability in the North Atlantic, known as the North Atlantic Oscillation (NAO). Over the past 30 years there has been a negative trend in the NAO that is characteristic of a wobbly jet stream and warmer air temperatures over Greenland and northeastern Canada (Figure 4). The SST pattern in the tropical Pacific is highly correlated to the annual NAO index, and the authors speculate that Rossby waves originating from the tropical Pacific Ocean are driving this association.

The authors examine 40 additional ocean-atmosphere models and find no cooling pattern in eastern equatorial Pacific SST or regional warming over Greenland and northeastern Canada. This shows that natural Pacific SST variability forces at least half the anomalous air temperatures over Greenland and northeastern Canada, while human-induced greenhouse gases account for the other half of widespread warming across the entire Arctic region.

This research highlights the complex processes involved in regional climate variability. It seems unfortunate that both natural and anthropogenic causes have conspired to melt a large portion of Greenland glaciers over the past three decades. The International Panel on Climate Change forecasts future greenhouse gas scenarios favorable to a warming world, and it seems only likely that this anthropogenic component will dictate Arctic warming in the future. 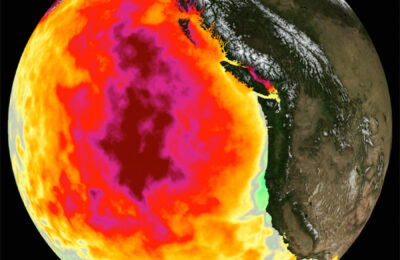