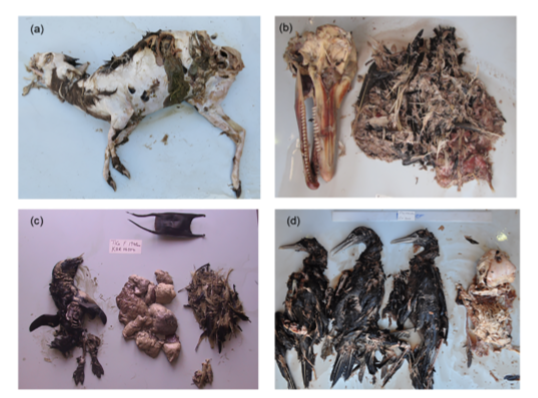 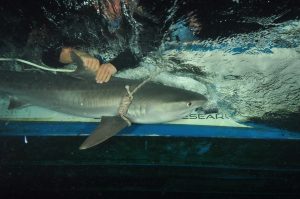 The tiger shark (Galeocerdo cuvier) is a large globally distributed shark species with confirmed size estimates over 16 ft. (5 m) and unconfirmed reports of individuals over 18 ft. (5.5 m). These sharks go through an incredible change in size from a 2.5 ft. (0.8 m) baby to the largest known sizes mentioned previously. As these sharks grow they go through ontogenetic changes or shifts. An ontogenetic shift is when an animal begins to use a different habitat, expands the range it uses, or often begins feed on new prey items as it transitions into a different life stage. Tiger sharks are famous for another characteristic that is partly due to an ontogenetic change as they grow: their diet. Occasionally referred to as the “garbage disposal of the sea”, the tiger shark is well known to have an extraordinary diet ranging from edible meals, such as fish, turtles, and whales, to inedible meals like aluminum cans and license plates. When young, tiger sharks begin feeding on bony fish before transitioning to larger prey as they mature.

Traditional analyzing the diet and trophic (food web) position of sharks involved looking at stomach contents. The samples are often collected through dissection or when prey is regurgitated during capture. Depending on the rate of digestion, it is not uncommon to be able to identify prey to the family, genus, or even the species level. Recently, stable isotope analysis has become a popular method of examining the trophic position of a species. Stable isotope analysis relies on using a small tissue sample (skin, muscle, or liver) to measure the ratios of carbon (13C/12C) and nitrogen (15N/14N) in an individual. The carbon ratio can identify what habitat an animal frequently feeds in; while the nitrogen ratio identifies what niche or position and animal occupies in a food web. These ratios change in the different tissues sampled at varying rates providing long-term and short-term snapshots of what an animal has been feeding on. Using stable isotope analysis in conjunction with stomach content analysis can provide detailed clues about recent and long-term trends in an individual’s and even a population’s diet and trophic level.

Tiger sharks are fairly common in the water surrounding South Africa, but little is known about their diet and trophic ecology. Courtesy of the KwaZulu-Natal Sharks Board, there has been long term access to tiger sharks in this area as a result of bycatch. Given the broad diet of this shark as an apex predator, it is imperative to study the diet of this species at different life stages to properly implement ecosystem and species-based management plans.

This study has several objectives that are relevant to understanding tiger shark ecology in South Africa. The primary goals are to examine long term trends in diet and trophic level between small, medium, and large tiger sharks. In order to achieve these objectives, the study looks at the stomach contents of 628 tiger sharks from 1983 – 2014 measuring from 3 ft. (94 cm) to 11 ft. (335 cm) precaudal length (before the caudal or tail fin). Stable isotopes were taken from multiple tissues (skin, muscle, and liver) to identify changing trends in diet with size as well as with the seasons. A portion of this study also reviewed changes in tiger shark diet from decade to decade. This research has valuable applications for understanding the impacts of tiger sharks on the food web at different sizes and through time.

The initial findings of the study show that tiger sharks do go through ontogenetic shifts in diet and habitat use. The small tiger shark class relied more heavily on coastal teleosts (bony fish), stingrays, and small sharks for their diet than medium or large classes. Medium and large class tiger sharks increasingly preyed upon birds, mammals, reptiles, and larger shark species as they grew with other sharks and baleen whales becoming the primary prey species in medium and large sharks respectively. Changing diet could be partly driven by range expansion as the shark grows and begins move into more diverse habitats. Stomach content analysis supports this conclusion as juvenile tiger sharks tended to have prey that preferred nearshore habitats; while large tiger sharks tended to have consumed prey, species found in offshore pelagic waters.

Interestingly, the tiger shark is very unique in its diet because it continues to prey upon small prey items as they grow. Crustaceans and cephalopods that seemed to be one of the primary prey groups for small tiger sharks were also consistently found in large tiger sharks. The overlap in diet resulted in stable isotope analysis placing tiger sharks in one universal trophic position indiscriminate of size.

Stable isotope analysis also revealed that South African tiger sharks are generalist feeders. As mentioned above, tiger sharks are known for their indiscriminate feeding on both edible and inedible items. Stomach content analysis identified 192 different prey species for the tiger shark; far more than any other shark species previously studied. The prey species identified came from a variety of habitats, such as coastal, reef, and pelagic waters, whichh supports the theory that tiger sharks are not only highly mobile, but feed in all habitats.

The medium size class was the only one used to examine seasonal changes in diet due to the sample size; however, there were shifts in diet between seasons in this class. In the summer and fall, medium sized tiger sharks fed primarily on other sharks with a transition in the winter and spring to feeding mainly on marine mammals. This shift in diet corresponds with the Northward migration of Humpback whales (Megaptera novaeangliae) a known prey species.  In addition to seasonal variations in diet, there were also decadal differences. With the exclusion of the tiger shark, there have been population declines in South African sharks over the last 30 years. Given their slow reproductive rate, late maturity, and small litter sizes, shark populations are more susceptible to fisheries practices. As a result of declining shark populations, tiger shark predation on cetaceans has increased over the last thirty years.

Due to the generalist feeding behavior of tiger sharks in South Africa and high trophic position, this species has far reaching impacts on the rest of the food web. The unique feeding strategy of tiger sharks does not exert the same type of pressure that a specialized apex predator like a great white shark (Carcharodon carcharhias) would. In order to devise valuable management practices, it is critical to understand how this species influences the rest of the ecosystem.