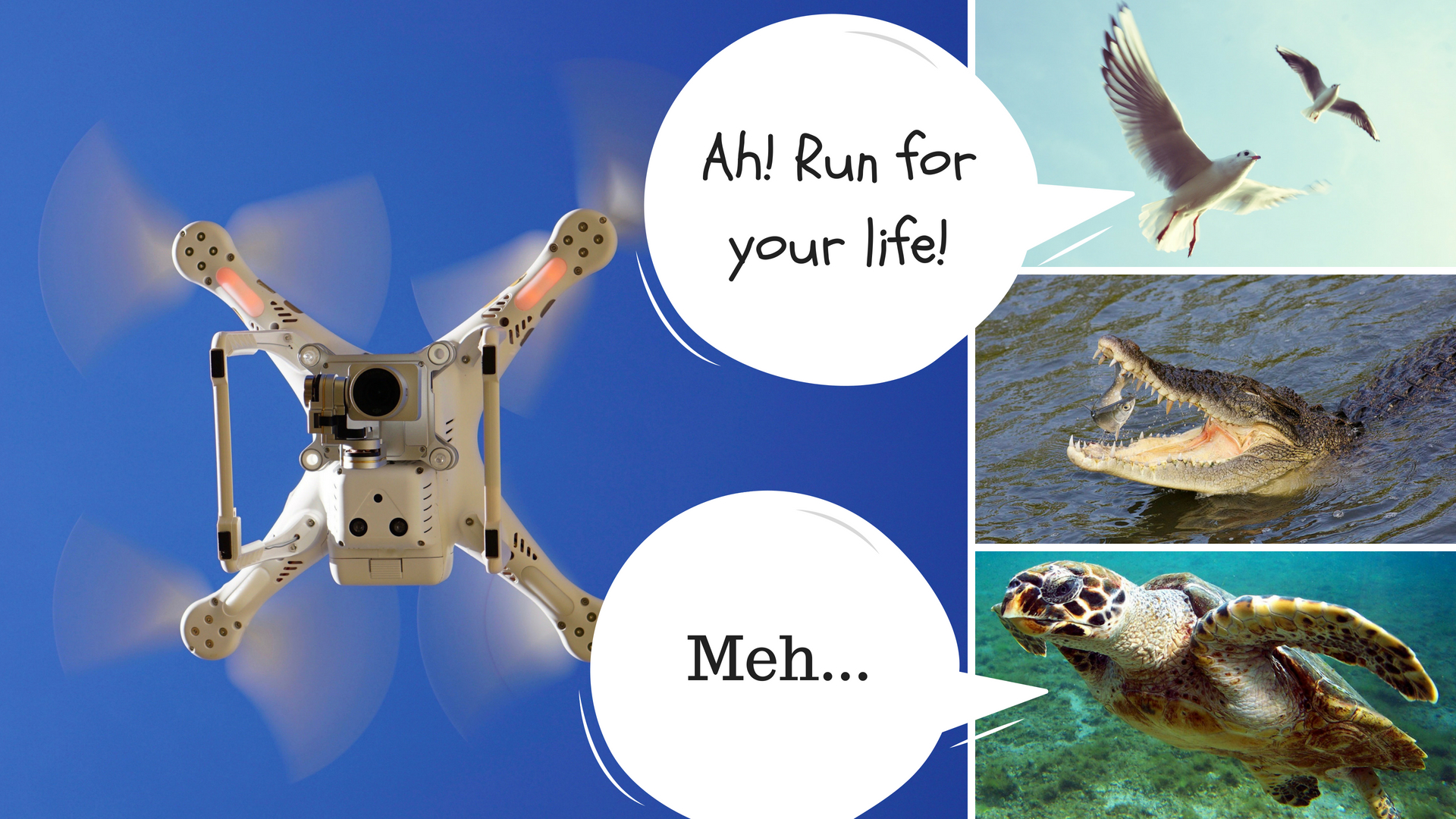 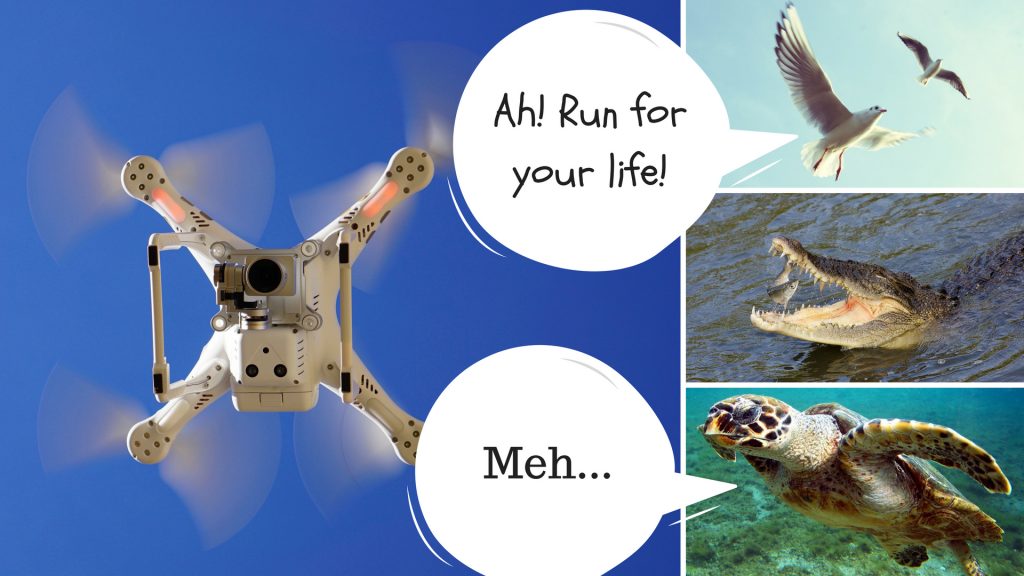 Unmanned aerial vehicles, more commonly known as drones, are quickly gaining popularity as cost effective tools for conservation research. Unlike in-person surveys, drones can quickly locate a target, take many high quality photos, and may minimize the influence of human presence on the behaviour of a target animal. For some research purposes however, drones must operate at close proximity to their target in order to accomplish the researcher’s goal (such as identifying the species, determining sex, counting numbers of individuals, or observing behaviours of individual animals). What impact this close proximity monitoring has on the target animals is poorly understood.

Determining which marine animals are suitable for monitoring via drone, and which are not, requires an understanding of three things: 1) the ability of the animal to detect the drone – can it see, hear, or sense the drone to begin with?; 2) the kind of disturbance drones create for animals – do they resemble predators, do they create a lot of noise?; and 3) what kinds of background influences in the environment might interact with these factors – is the environment already noisy, or can the drone easily hide or go undetected?

A collaborative study recently conducted by American and Australian scientists and published in PLoS ONE this year gives us a glimpse at the different responses marine animals display in the presence of drones. Bevan et. al. tested a small commercial drone at prime nesting and feeding habitats in tropical Australia; on Bare Sand Island, Cape Domett, and reefs of Camden Sound, which all support wild populations of sea turtles, crocodiles, and seabirds.

Flying their drone at altitudes between 70 and 15 metres and at a constant speed of 3-8 metres/second, they noted the behavioural response of the animals they encountered during the flight. Being careful not to repeat the process too much and risk habituating the animals to the drone, they flew over the target animals multiple times at different altitudes to see if distance had an effect on behaviour.

Altogether, the researchers monitored three species of seaturtles (Green Turtles, Flatback Turtles, and Hawksbill Turtles), one species of crocodile (Saltwater Crocodile), and one bird species (Crested Terns). Of the three, the Terns were the most obviously affected by the presence of the drone, flying away when the drone was flown below 60 metres. Crocodiles displayed a variety of responses, including minor head movements, fleeing, or submerging underwater, and were most affected when the drone was flown below 50 metres. Turtles, in contrast, displayed no evasive behaviours in response to the drone, even at very low atitudes. The researchers flew as low as 20 metres over different turtle species swimming in nearshore waters, with no notable change in behaviour. They also flew as low as 10 metres over Green and Hawksbill Turtles that were foraging underwater on algae-covered reefs and as low as 10 metres over nesting females on beaches, with no response.

The researchers say these responses are likely explained by the unique species-specific traits of each animal as well as the environmental conditions in which they were monitored. The drone emitted an audible buzzing sound similar to other small commercial drone models. While crocodiles and seaturtles can hear sounds in the decibel range of small drones, it’s uncertain whether the animals in Bevan’s experiment could hear the drone at higher altitudes or when the animals are underwater. Birds are less likely to hear small drones, as they tend to hear at higher frequencies than the drone emits. This means the heightened response witnessed in the birds is likely influenced by their ability to see the drone. The seaturtles on the other hand, which seem completely unbothered by the presence of a drone, may either not be able to see the drone or its shadow, even when it is very close, or they may simply not perceive the drone as a threat.

Bevan et. al.’s study suggests that marine animals display a variety of responses to drones and the unique behavioural and environmental conditions that influence these responses should be considered when using the technology to study different animals. Seaturtles appear to be suitable candidates for drone monitoring at close range. Birds, however, require greater set back distances to avoid disturbance, although the researchers note an uncertainty over whether the birds they observed were breeding individuals, which could affect their response compared to non-breeding birds.

Advancements in aerial technology may open many doors for scientists hoping to gain greater insight into the fascinating lives of marine animals, but only if they can also minimize disturbance inflicted on their study subjects. Bevan et. al.’s study offers some advice for drone enthusiasts in marine environments and suggests some promising directions for future drone research.