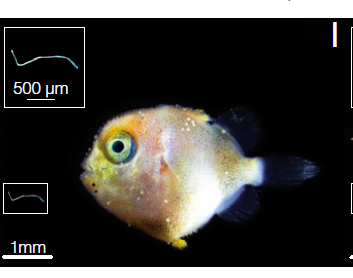 Even a 14-foot long swordfish begins life no larger than a small mosquito. Like most fish, once a swordfish hatches from its egg, it must fend for itself. There are no other fish to teach it to hunt or shelter it from predators. The 4 mm (less than ¼ inch) larval fish is at the mercy of the ocean currents. For the first few days or weeks of its life, the larval fish will be pushed around by the water’s movement, until it grows a little larger (until the larvae is about 12 mm or ½ an inch long) and develops into a stronger swimmer. All the while, the larval fish must eat so it can continue to grow. The small fish will rely on microscopic animals that float in the water column, called zooplankton, to fuel its growth and development into a larger juvenile fish, when it can begin eating larger prey items.

Most ocean fish begin life in much the same way as the swordfish: incredibly small larvae, drifting with the currents until they become large enough to settle in their final home. Since these larval fish represent the next generation of fish in the ocean, scientists need to understand how they are growing and surviving in order to predict how future fish populations might fare. Unfortunately, their small size can make it difficult for scientists to study these larval fish in such a vast ocean environment.

Rolling with the waves

A team of researchers out of Hawaii, however, decided to look for larval fish in an interesting habitat – ocean slicks. You may have seen some of these ocean surface slicks if you have watched the ocean on a relatively calm day and noticed some extremely smooth tracks of water meandering through an otherwise choppy surface. Slicks are the smooth areas you can see at the surface. They are generated by different ocean currents, internal waves, and other oceanic movement, all of which serve to pull floating organisms, like plankton and zooplankton, into a single location. Since slicks have a higher concentration of zooplankton (the larval fish’s preferred food source) than the surrounding waters, researchers decided these slick environments were a good place to check for larval fish.

A buffet for baby fish

As expected, the slicks had a much higher concentration of zooplankton than surrounding areas. Along with the zooplankton, there was also a larger aggregation of larval fishes. In fact, larval fish were 8 times more abundant within slicks than they were in the surrounding environment. The larval fish that researchers found in the slicks were large enough that they should have be able to actively swim, suggesting that the larval fish were not simply pulled into the slicks by currents. Instead researchers suspect that larval fish are attracted to the slicks, which have a high concentration of prey and are, therefore, a perfect foraging ground. Interestingly, the slicks contained a large variety of different types of larval fish as well. Researchers found species of coral reef fish, important bait fish like flying fish, deep-sea fish species, and commercial important fish species like mahi-mahi and swordfish.

Alarmingly, the slicks aggregated more than just zooplankton and larval fish. Within the slicks, researchers found large amounts of small pieces of plastic.  These small tracks of water contained 126 times more plastic than the surrounding waters! To put that in perspective, these surface slicks made up less than 8% of the ocean surface in Hawaii but contained over 90% of all floating plastics in the area. That means that the plastic found in these slicks was more than 8 times more concentrated than plastics found in the Great Pacific Garbage Patch!

Not only do these plastic pieces outnumber both fish and their prey within the slicks, but the plastics are the same size as fish prey. Since larval fish appear to be actively hunting within these slick waters, there is a high possibility fish might mistake plastic pieces for tasty prey items and begin eating plastic. In fact, when the researchers examined the gut contents of larval fish the recovered from the slicks, they found that, indeed, many different types of larval fish had ingested pieces of plastic. The larval fish found inside the slicks were 2 times as likely to have consumed plastic as fish found outside of the slicks.

You are what you eat

There are some serious concerns with fish eating pieces of plastic. Plastics can cause a suite of gut issues, like creating sores or cuts in the gut track or causing blockages – both of which can be fatal. Even if the plastics don’t damage the gut tissue directly, filling up on plastics gives fish absolutely none of the nutrition they need. If a larval fish consumes too much plastic, it could suffer from malnutrition or even die from starvation.

Possibly the most worrisome issue surrounding plastic consumption stems from the fact that plastics absorb toxins from the surrounding environment, meaning that every small piece of plastic is a veritable cocktail of chemicals and toxins. When a fish eats toxin-laden plastics, those pollutants and chemicals can get absorbed by the fish and incorporated into its body. If the fish eats a single piece of plastic, this might not be a huge problem. However, the more plastic the fish eats, the more toxins become accumulated in its body. If fish begin eating plastic and accumulating toxins in their body from the start of their life, there is concern that by the time they reach adulthood, the toxins will be highly concentrated. Potentially worse, though, is the possibility that these toxin-soaked larval fish will become food for other animals. In this case, other fish or sea birds that eat the larval fish, they too become exposed to all of the chemicals that the larval fish ingested. In this version of biological magnification, larger fish (often times the exact fish we prefer to eat ourselves), will eat more and more little polluted fish and will, therefore, end up absorbing a much higher dose of toxins themselves even though they have not directly ingested any plastics.  In this way, the fish we rely on for food can easily become polluted by toxins.

It is not new news that plastic pollution is a problem, however the fact that small plastics can flood larval fish foraging grounds and upset the food web is problematic. Not only could the plastic ingestion in larval fish lead to earlier deaths and higher mortalities in some critically important species – leaving less fish in the ocean to repopulate already low stocks of fish – it could create build-up of toxins and pollutants in the very fish we find on our own dinner plates.