Vocal signals are a critical form of communication for many animals, and are often used as contact calls to maintain group cohesion when individuals start to disperse too much. We’ve all heard teachers shouting out instructions for us to stay in our single file lines, but even other animals use vocalizations to keep group cohesion; for example, chimpanzees use vocal calls targeted to family members and allies to stay in close proximity (Fig. 1). Caimans, relatives of crocodiles, increase sibling cohesion by using vocalizations, and dolphins alter their sounds based on how dispersed their group is. Maintaining group cohesion via vocal signals has been observed in a wide range of animals, but has never been directly observed in fish.

The ability of fish to produce sound and vocalize is well known, and we recently discussed how fish can use sound to attract mates or in territory disputes. In addition to vocalizing, we know many fish species aggregate in schools as a way of avoiding predators or foraging for food (Fig. 2). We know that schools are often maintained by visual cues, like seeing a large predator nearby, or hydrodynamic cues (like movement

or chemical cues in the water), which can be helpful when visual cues are limited. It would make sense, then, that some fish species, particularly those nocturnal ones (active in the absence of light), would use vocal signals to help maintain the cohesion of a school. If fish do use vocal signals for group cohesion, this would mean that fish would then be the oldest evolutionary group to have evolved this ability, helping in our understanding of how communication between groups of animals came to be. With this in mind, researchers from New Zealand tested whether or not vocalizations were used by the New Zealand bigeye (Pempheris adspersa) in relation to school cohesion (Fig. 3 and 4).

Divers collected bigeyes off the coast of New Zealand and brought them to a laboratory where their groups and vocalizations could be tested. Groups of 24 individuals were used in large aquarium tanks rigged with advanced, underwater speakers, recorders, and cameras. Researchers first wanted to see how these fish responded to increasing levels of ambient coastal sounds. Fish were played 10 minutes of ambient sounds followed by 10 minutes of silence. During the 10 minutes fish were played sound, school cohesion (determined by the area occupied by the 24 fish) was high. But when the sounds were turned off, dispersal of the school drastically increased (Fig. 5), and in some cases, the amount of vocalization increased. Here, fish are sticking together in a noisy environment.

Researchers also tested how the fish schools responded to vocalizations by their own species, they did this by playing previously recorded bigeye sounds. When played these recordings, the 24 fish were found to increase their cohesion and also were more vocal themselves (Fig. 6 and 7). Basically, these fish become more cohesive when they can hear one another, direct evidence of vocalizations being used to keep the school together.

Never before have vocalizations used as contact calls been observed in fish. While contact calls have been observed in many other animals, finding it in fish highlights that this is the oldest evolutionary group to employ this method of cohesion. This study shows a new way in which fish can utilize sounds cues, rather than finding a mate or defending territory: fish use sound to make sure their group stays together. Studies like this show how researchers can use cutting edge audio technology in novel ways to uncover new behaviors in fish, opening the door for many future studies. 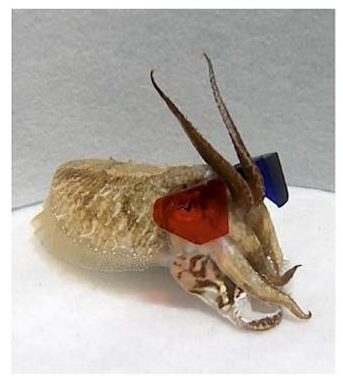