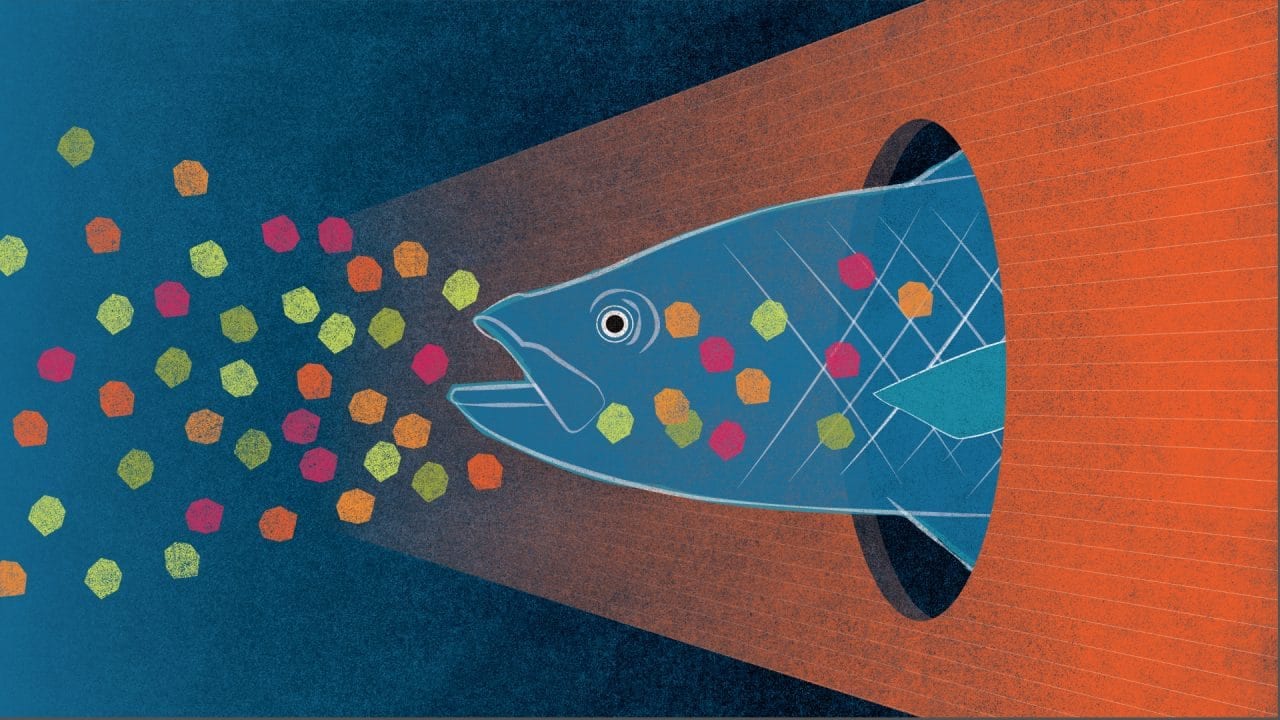 It is not news that plastics are now consistently being found all over the globe in marine environments. Estimates point to more than 5 trillion plastic debris (that is, over 250,000 tons) floating actively at sea (Eriksen et al., 2014). A significant amount of said debris come from continental sources that enter oceanic environments primary through rivers (Lebreton et al., 2017), industrial and urban effluents, and beach runoff. The other part results from direct inputs, such as offshore industrial activities (e.g. aquaculture, gas and oil extraction), litter released during sea activities, the loss of nets in fisheries, and tourism. Among that plastic litter, there is a specific type of plastic that scientists are realizing is even more concerning regarding environmental and animal health, but even human health: microplastics. 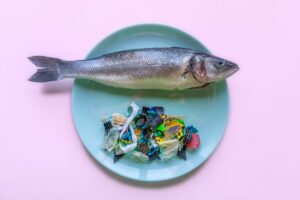 So, what are microplastics really? Just tiny versions of plastic? Well, yes, but let’s also discuss the danger they impose. Microplastics are small pieces of plastic that are less than 5 millimeters in size. It is important to note that they actually have no lower limit established, in size (GESAMP, 2016). Examples of microplastics are pre-production pellets and components of diverse products, such as fragments of fishing gear, packages and drink bottles, synthetic textiles, car tires, paints, cosmetics and personal care products (e.g. facial cleaners, bath gels, toothpaste), and electronic equipment among others (GESAMP, 2016). Consequently, microplastics encompass a very heterogeneous assemblage of particles that vary in size, shape, and chemical composition, among other properties (Andrady, 2017).

Okay… But who eats microplastics?

Microplastic ingestion has been observed in a range of animals of commercial interest that are consumed by humans as food, including fish (e.g. Atlantic cod, Atlantic horse mackerel; European pilchard, red mullet, European sea bass), bivalves (e.g. mussels, oysters), and crustaceans (e.g. brown shrimp) (Bessa et al., 2018). In addition to animals from wild populations, those from aquaculture can also ingest microplastics (Renzi et al., 2018). For example, bivalves cultured in estuaries and coastal lagoons are prone to ingesting microplastics because the water and sediments of many such areas are contaminated with these particles (Lusher et al., 2017). Furthermore, aquaculture systems where fish, shrimps or other farmed species are fed with feeding materials produced from fish and other animals (e.g. fishmeal) may be contaminated with microplastics present in these products (GESAMP, 2016). The presence of plastic debris has also been detected in seafood sold for human consumption, as well as in fish and shellfish purchased from markets (e.g Rochman et al., 2015; Karami et al., 2017a). This evidence raises concerns regarding the ingestion of microplastics by humans through the consumption of marine species contaminated with these particles as food and the potential effects on the human health.

So, how serious is this, really, for human health and food safety?

It is now well-known that microplastics are highly persistent in the environment and are accumulating in different ecosystems at increasing rates (Andrady, 2017). For this reason, microplastics are considered an emerging issue of great concern. However, uncertainty and variability in the data are considered as one of the main factors that hinder a realistic assessment of the environmental risks associated with these microparticles. Thus, the real environmental risks of microplastics remain uncertain (Koelmans et al., 2017b).

The transfer of pathogens from ingested plastics to humans is still speculative. It is currently unknown to what extent plastic debris is involved in the spread of infectious diseases to humans. However, the survival of these pathogenic organisms on plastic debris has not been extensively studied, and understanding pathogen transmission and infection disease risks via the consumption of seafood will require further studies.

Other critical issues regarding animal, ecosystem and human health are the toxicological interactions between microplastics and other environmental contaminants of concern, as well as the influence of alterations due to global climate changes, especially temperature variations, on such interactions.

Regarding human health, here’s what these scientists concluded.

The contamination of oceans by microplastics is of concern not only because of the ecological impacts but also because they may compromise food security, food safety and human health. The presence of microplastics in species used for human consumption is a global problem and we are vulnerable to microplastic exposure through the consumption of seafood and other human food items, as well as through other routes such as air. Nevertheless, information on the occurrence of microplastics in these products is scarce, the exposure levels are in general largely unknown, and the potential effects on consumers are poorly understood. This information is necessary for providing a basis for a sound risk assessment. Understanding the processes and mechanisms involved in the entry and assimilation of microplastics in human tissues and their potential effects on human health is a priority research area and should be explored in the coming years. In this regard, these scientists identified some challenges or knowledge gaps below:

✔ Since microplastic concentrations are expected to increase in future, it will be increasingly important to regularly assess levels of microplastics in seafood and other food items.

✔ It is important to quantify the presence of microplastics in edible tissues of fish and shellfish. Also, the quantification in edible echinoderms, tunicates and algae also deserves investigation since in several countries they are widely consumed.

✔ Continuous monitoring programs will be required to evaluate the presence of microplastics in environmental compartments and thus avoid the reduction of global fish and shellfish stocks.

✔ Research also should focus on the contributing chemical and microbiological hazards and risks associated with ingested microplastics and in improving methods to evaluate the intake and translocation of these particles in humans.

✔ It is important to adopt food safety risk analysis frameworks to evaluate hazards and risks to consumers of fish, shellfish and food items contaminated with microplastics.

✔ There is a great need to study the assimilation of a range of microplastic sizes and compositions into human tissues and in the development of techniques capable of identifying the presence of microplastics in the human body (e.g. biopsies and tissue banks).

✔ Another area that deserves urgent attention is the presence of nano-sized plastics in seafood on which there is even less data in the literature.

✔ Research on analytical methods and the toxicity of micro- and nano-sized plastics is needed to improve the understanding of their potential impacts on seafood safety and human health.