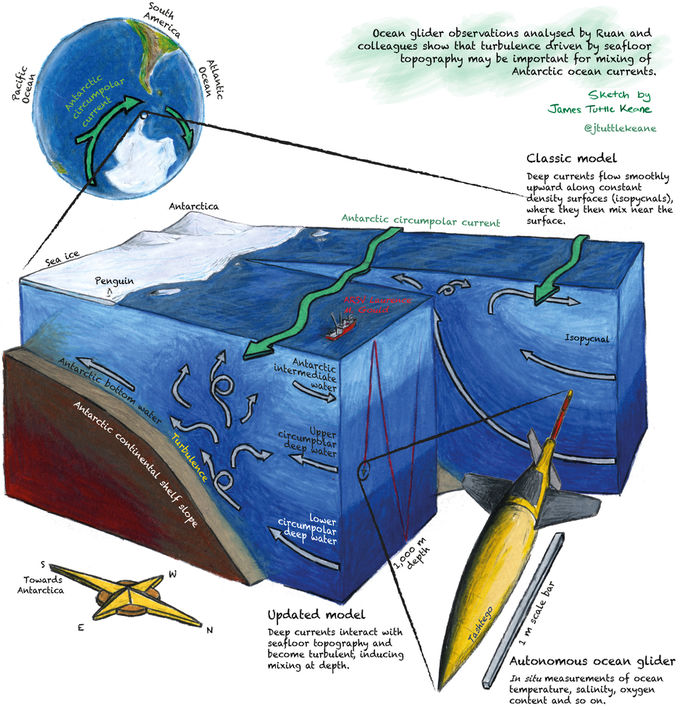 The global ocean overturning circulation, sometimes referred to as the global conveyor belt, redistributes heat, nutrients and carbon across the globe and shapes global climate patterns. The Southern Ocean, which encircles Antarctica, is especially important for the global conveyor belt because most of the nutrient and carbon-rich deep ocean water returns to the sea surface in the Southern Ocean where it can interact with the atmosphere, in a process known as upwelling. This upwelling water is also delivering heat to the base of Antarctica’s ice shelves where it is rapidly melting them from below, contributing to sea level rise.

The traditional view is that in most of the deep ocean, apart from very close to the seafloor, this upwelling can happen without water mixing and changing its density. At the very bottom of the ocean, the densest water can interact with steeply sloping undersea topography, which interrupts the flow causing the water to mix vigorously with surrounding water, changing its density. But in recent years, scientists have been able to measure mixing processes in previously unobserved parts of the Southern Ocean, and with new measurements and better theories, our understanding of how this overturning circulation in the Southern Ocean works is rapidly changing.

There are different mechanisms that cause the changes in density of this deep water near the seafloor including mixing caused by tidal flows and breaking of waves that move in the ocean interior. When strong currents flow along a steep-sloping seafloor, this can generate turbulence and mixing in a layer above the seafloor, creating a thick, uniform layer at the bottom called the bottom mixed layer.

These processes are notoriously difficult to measure in the deep Southern Ocean because they usually require instruments that are deployed over the side of a ship, but the extreme weather conditions and seasonal ice coverage make operating ships in the Southern Ocean challenging and very expensive. Because of this limitation ship-based measurements are often collected over short timescales in small regions. However, underwater robots, known as gliders, are making the Southern Ocean more accessible as they can collect data for longer time periods with better spatial coverage for a lot less cost than a ship, and are changing the way we study these processes.

In late 2014 (southern hemisphere summer), a team of researchers from the US released a pair of underwater gliders from a ship near the Antarctic Peninsula, along the edge of the continental shelf where the seafloor drops off steeply away from the Antarctic continent.  There is a strong current flowing eastward along the shelf edge, hugging the continental slope. The gliders measured ocean temperature, salinity, oxygen, and estimate the amount of biological activity in the water. The gliders repeatedly dive down as deep as 1000 m and come back up, forming V-shaped dives as they go. For four months, the gliders repeated their dives, moving back and forth between the shallow Antarctic waters and the deep waters to the north, before being recovered from the ship.

The glider measurements clearly show the pool of warm deep water sitting offshore from Antarctica. Using the observations of temperature and salinity, the researchers calculated the density of the water, which they then used estimate the strength of the flow and infer how much mixing is happening between different density waters.

The glider observations indicated that strong flows near the seafloor interact with topography and become turbulent, driving vigorous ocean mixing. This modifies the dense upwelling water, changing its density and providing a shortcut to upwelling to the sea surface. While the authors only measured this intense mixing in one place, there are many places where the dense upwelling water intersects steep topography in the Southern Ocean, so it is likely that this mixing happens elsewhere as well. This means it could play an important role in the overall mixing that happens to deep water as it upwells, which would change our current picture of the overturning circulation in the Southern Ocean.

Mixing in the ocean around Antarctica might seem like a remote thing to most of us, but improving our understanding of how the Southern Ocean circulation works is essential for us to understand how our climate is currently changing and for our ability to accurately predict and prepare for future climate changes, including the rate of sea level rise. 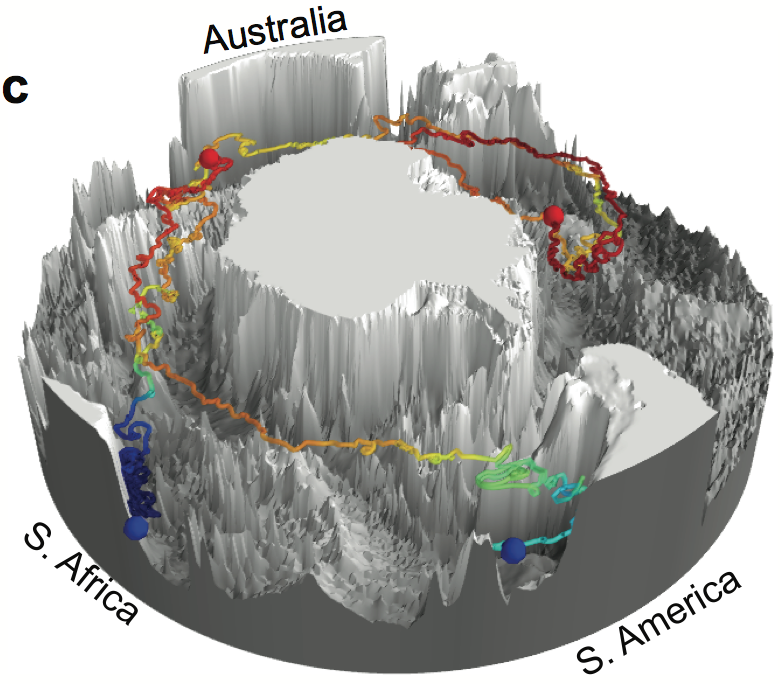 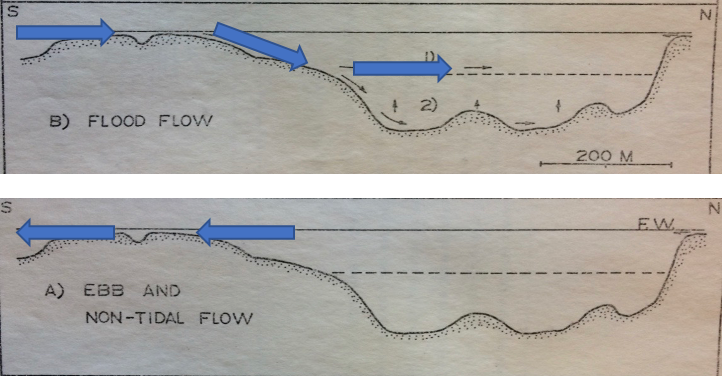