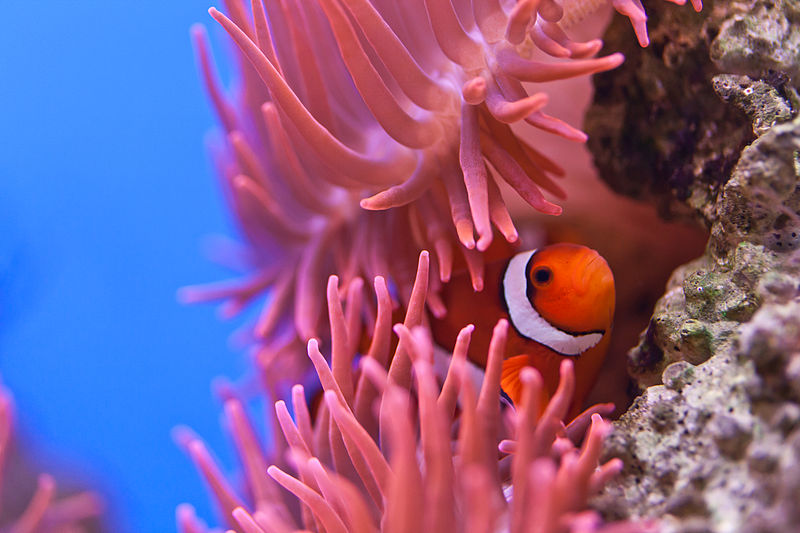 Thanks to Finding Nemo, a lot of people know about the relationship between sea anemones and clownfish, also called anemonefish. These fish have evolved a special mucus that protects them from the anemone’s toxic stings, allowing the fish to benefit from its protection. Anemonefish spend their entire adult life living with the anemone and are highly territorial, aggressively defending their home from other fish. However,  several other fish species, such as damselfish, can use anemones as temporary shelter, and some of these fish even benefit the anemonefish by cleaning it.

Fish are visual creatures, and colour is an important way for fish to communicate and recognize one another. This is especially true for fish living on coral reefs, where the water is usually clear and well-lit. Nemo has large white stripes that stand out against his orange background; these vertical bars are a general feature of anemonefish, although the background may be orange, red, or black. Reef fish show a huge diversity of colours and patterns, including bars, horizontal stripes, and spots. Marine biologists have noticed that anemonefish seem to be less aggressive towards fish with spots or stripes, and more aggressive towards fish with vertical bars, leading the researchers to hypothesize that anemonefish use these patterns to decide which species to tolerate or exclude from their home. In other words, colour patterns might determine who has access to these habitats.

To test this idea, the researchers examined the colour patterns of these “temporary resident” fish, comparing species that take shelter in sea anemones to those that use corals. Since the corals don’t have anemonefish, those habitats are more accessible, but if you want to go near a sea anemone, you have to deal with its belligerent homeowner. Fish that used corals had a variety of patterns, and about 35% had vertical bars. However, not a single species of fish that used anemones had a vertical bar pattern, suggesting that barred fish somehow can’t use anemones as shelter.

The researchers then tested whether this pattern is due to the behaviour of the anemonefish by exposing anemonefish to fake fish with different types of patterns. When presented with a “model” fish with bars, anemonefish were more aggressive and attacked for longer periods of time. Thus, it seems like anemonefish preferentially exclude barred fish, but sometimes tolerate other species.

Remember that anemonefish themselves have bars, so they may see other barred fish as potential competitors. If they know that another fish isn’t a threat–or even, in the case of cleaner fish, a helper–the resident anemonefish may be inclined to tolerate their presence.

Coral reefs are extremely complex habitats with a lot of shelter and 3D structure. This complexity allows for many species of fish to coexist in a small area, and is probably a reason why coral reefs are some of the most diverse and productive ecosystems on Earth. In a complex and dense ecosystem like reefs, species interactions play an important role in determining who lives where, and this study is a great example of how such interactions can shape marine ecosystems. The behaviour of one species can affect the distribution and behaviour of many other species, influencing the structure of the entire community.